Northeast Still Hanging In There

With Europe beginning to see a resurgence in COVID cases, concerns are rising on this side of the Atlantic about a possible bigger wave here as the weather cools.  One great way to track the trajectory of the COVID outbreak is in our Morning Lineup each day.  In each morning’s report, which is available to Bespoke Premium members, we include three pages of updates on key COVID trends in the US.

On the first page (left image), we include a quick recap of the latest developments as well as a summary chart of the national trends concerning average daily testing, the positivity rate, the number of new cases, and the number of deaths and hospitalizations. The second page (middle image) summarizes the outbreak on a state-by-state level and shows the daily number of deaths, cases, and tests performed each day on an individual state basis.  Finally, on the third page (right image), we provide a heat map that shows each state and how the current number of cases in each state compares to that specific state’s peak and whether or not the current trend of positive cases is rising or falling. 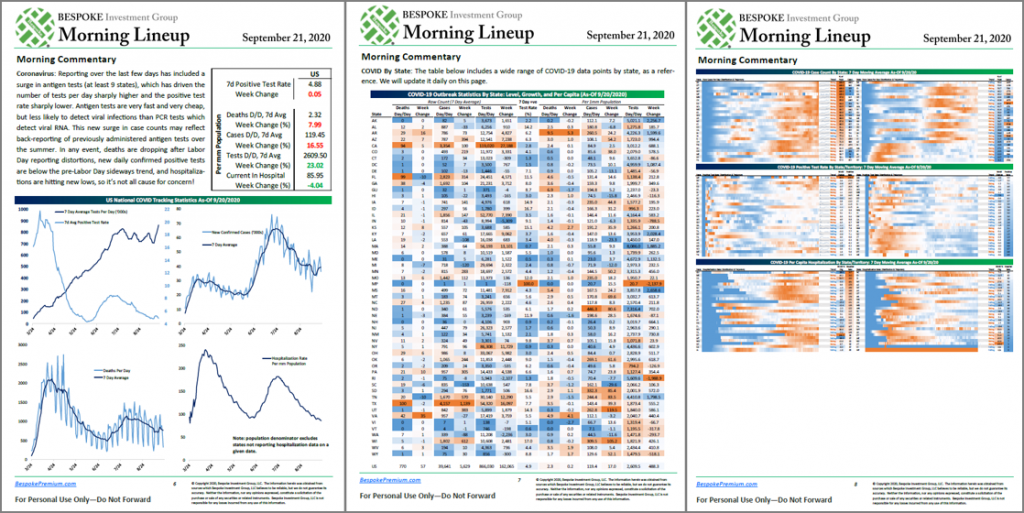 Using the data on the third page of our daily summary, we created the map below which shows each state and where their current average daily number of new cases ranks relative to its peak readings since the onset of the outbreak. Looking at the map, it’s interesting to see how the outbreak has progressed throughout the country.  While both the coasts and the south now have case counts well below their peak levels, it’s now the middle of the country that is seeing case counts at or near their peak levels.  The five states that currently have the fewest number of cases relative to their peak readings (NY, NJ, VY, MA, and CT) are all in the northeast US.  Meanwhile, the states where current case counts are either at or near a peak level are in the center of the country. 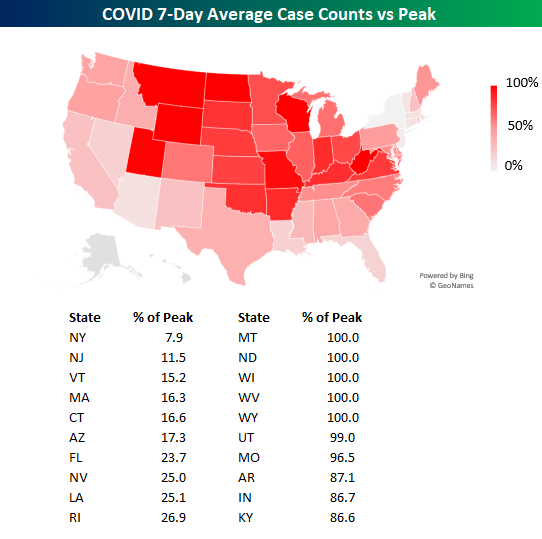 Looking at the map above, there is a decent amount of red which indicates that many states have case readings that are closer to peaks than troughs.  In fact, 17 states currently have caseloads that are at or above 75% of their peak readings while 28 are still above 50% of their peak readings.  What’s important to note, though, is that the states currently experiencing the highest caseloads relative to their peaks aren’t major population areas.

The map below shows the percentage of the total US population that each state accounts for.  As shown at the bottom, the ten states that currently have the lowest caseloads relative to their peaks collectively account for nearly a quarter of the US population (23.2%), while the ten states that are either at or closest to their peak caseloads account for just 10% of the total population. So while a lot of states are currently seeing rising caseloads relative to their respective peaks, most of these states are small in terms of population. The key areas to watch going forward into the fall are the major population states that each account for at least 5% of the US population like California, Texas, Florida, and New York, and then to a lesser degree states that account for 3%+ of the population like Illinois, Pennsylvania, Ohio, Georgia, North Carolina, and Michigan. As things currently stand, these ten states currently have an average caseload that is more than 50% below their peak levels of the outbreak.    Receive our COVID-tracking charts and analysis in your inbox each morning with a two-week free trial to Bespoke Premium. 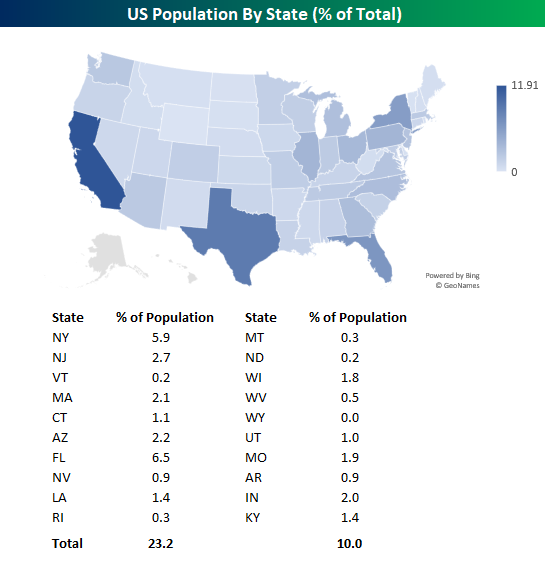