Sentiment has continued to head back towards more normal levels as equities press higher.  The latest reading from the AAII on the percentage of investors that are bullish on the S&P 500 over the next six months reached the highest level since March.  At 32.2%, bullish sentiment is now only 5.5% below the historical average. 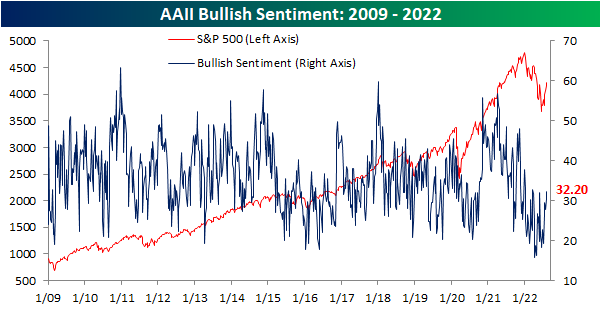 The reading on bearish sentiment meanwhile has dropped to 36.7% which is also the lowest reading since the end of March; the last time this reading was below 30%. 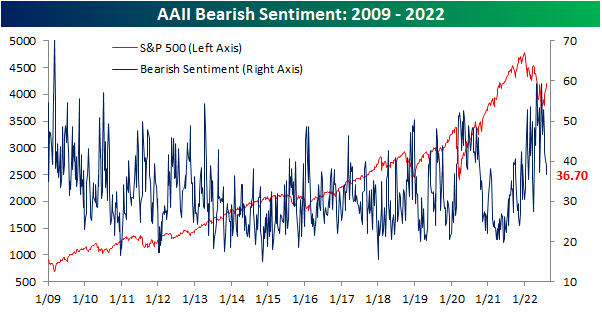 Although both bullish and bearish sentiment are closing in on one another, bears continue to outnumber bulls.  The bull-bear spread rose to -4.5 this week extending the streak of negative readings to 19 weeks long. At the moment, that is the third longest streak on record and would need to continue for at least three weeks more to tie the second-longest streak on record of 22 weeks ending in December 1990. 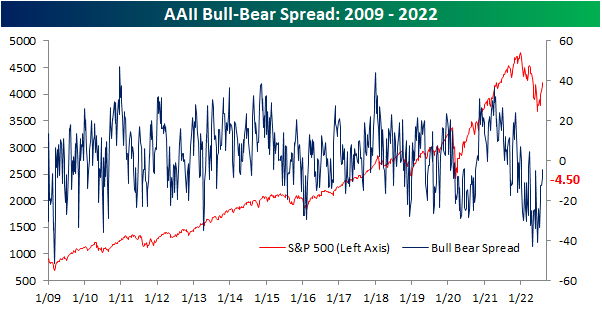 While the bull-bear spread remains negative for the AAII survey, other sentiment surveys have been showing more bullish sentiment. The Investors Intelligence survey has had a positive bull-bear spread for three weeks in a row now, and the NAAIM exposure index has shown investment managers have been quick to add exposure to equities in recent weeks.  Standardizing these three survey results (measuring each one in how many standard deviations from the long-term average they are), the NAAIM and Investors Intelligence surveys are now back into positive territory.  In other words, these two surveys are actually showing sentiment as having moved slightly above what has been the historical norm.  Meanwhile, the AAII reading is far more negative even if it is trending higher. 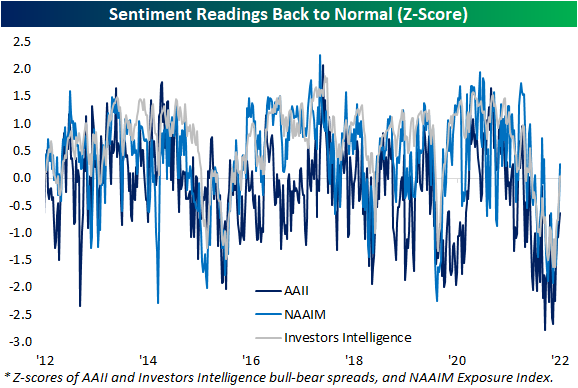 Additionally, those are the first positive readings in some time.  For the NAAIM index, the z-score has not seen a positive reading in 15 weeks.  That is the longest stretch without a positive reading since the first quarter of 2016 and prior to that, there have only been a handful of other streaks that have gone on as long.  For the Investors Intelligence survey, it was an even rarer streak ending at 29 weeks long.  That was the longest since one that went on for roughly a year and ended in May 2009. Prior to that, you would have to go all the way back to 1995 to find a longer streak.

Then there are the AAII results. Still going at 32 weeks long, the z-score has only been negative for as many consecutive weeks once in the survey’s history, and that was during 2020.  All of this is to say that the AAII survey has been leaning more pessimistically than other surveys even as overall sentiment has largely made its way back to historically normal levels.  Click here to learn more about Bespoke’s premium stock market research service.