No Sickness In Services

ISM’s Non-Manufacturing index has now risen for three straight months for the first time since the three months ending in August of 2014. Up to 57.3, the index is at its highest level since February of last year.  Likewise, the composite reading (including both the service and manufacturing indices) has now risen in back-to-back-to-back months for the first time since April 2016. The index is now at 56.5, and is healthily above the recent multiyear low of 52.9 from September. That 56.5 reading is also the highest the composite has been since February of last year. 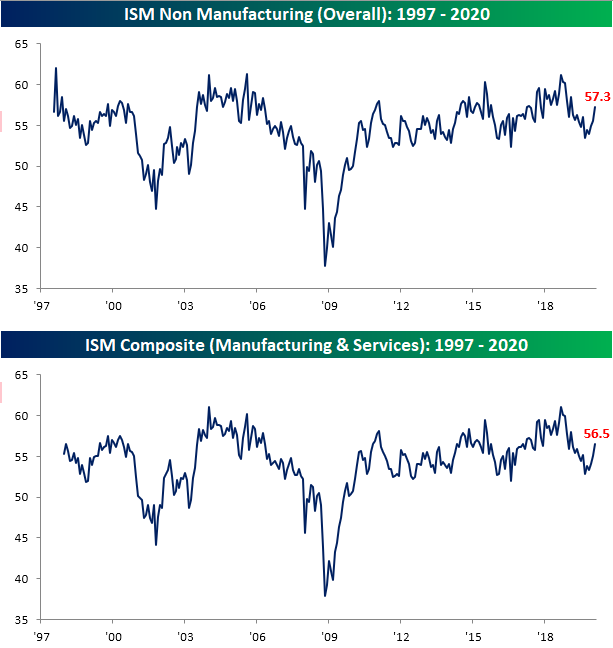 As with the Manufacturing Index which we discussed on Monday, due to the timing of the survey the full effects of the outbreaks of Covid-19 outside of China are not fully represented in this report as those occurred later in the month.  But even more limited to China, just as the manufacturing report did, company comments highlighted the coronavirus as a growing concern nonetheless. From these comments, the impacts of the virus do not appear to be extremely widespread at the moment with only three industries referencing it.  While Construction and Health Care industries have noted concrete effects in the form of “increased lead times for critical items” and “major back-orders” for items like masks and gloves, the mining industry failed to mention more specifically what consequences have already taken effect.  For both the Manufacturing and Non-Manufacturing reports, expect mentions of the virus to be much more prevalent in the commentary section next month. 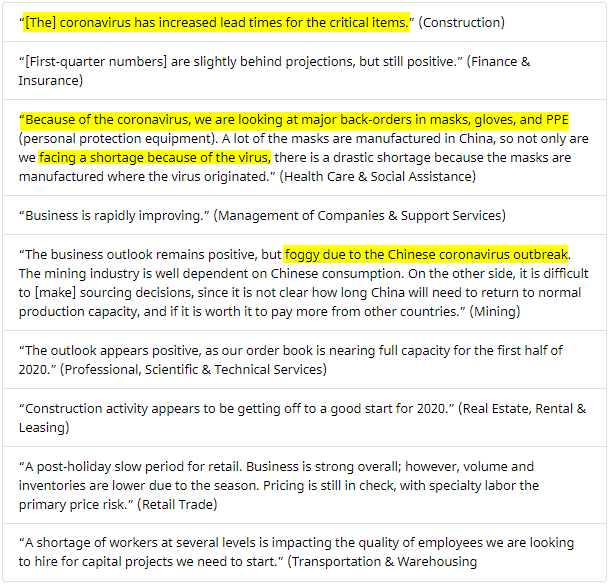 Breadth in this month’s report was strong with every category now sitting in expansionary territory, two of which—Backlog Orders and Inventories—were not last month. Additionally, all but three categories (Business Activity, Prices, and Import Orders) rose from one month ago.  Compared to one year ago, breadth is more mixed. 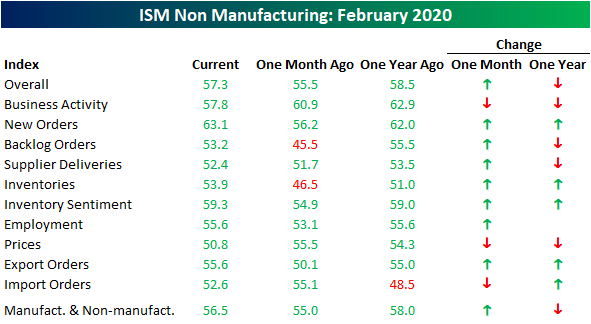 New Orders were a bright spot rising to 63.1 which is tied with June of 2018 for the strongest reading since July of 2015 when the New Orders index was just slightly higher at 63.4. Prior to that, you would need to go back to 2004 through 2005 when there were several months of higher readings. Additionally, the month-over-month increase of 6.9 points was the sixth-largest increase on record and the largest since a 7.6 point increase in January of 2018. While this could change in next month’s report, this shows that at least prior to the coronavirus outbreaks outside of China, activity in the services sector was near historically strong levels.

Backlog Orders echoed this trend. The index rose 7.7 points which was the largest month-over-month jump in Backlog Orders since May of 2018. Again, this seems to point to solid demand for the service sector.

To handle this stronger demand and get ahead of future impacts from the coronavirus, businesses have also increased inventories. After falling to 46.5 last month, the lowest level since October of 2012, Inventories rose back into an expansionary level at 52.4. That was the largest increase in a single month since April of 2014.

Despite this strong demand, the index for Prices Paid has continued to slide falling to 50.8.  While not indicating falling prices (readings under 50), it is the weakest reading since May of 2017. While low this month, this index is yet another category that could see a quick turnaround in the coming months assuming shortages from the coronavirus leads to higher prices as is beginning to be seen with some commodities. Start a two-week free trial to Bespoke Institutional to access our interactive economic indicators monitor and much more.