No New Low in Sight For Jobless Claims

Initial jobless claims remained elevated relative to recent history this week as the seasonally adjusted number came in at 234K compared to expectations of a decline to 225K. As shown below, the four-week moving average—which offers a better look at the overall trend by smoothing out this type of week to week volatility—has been grinding higher even before the past couple of weeks’ swings. In other words, regardless of the more recent surge, claims have been trending higher in the past year. 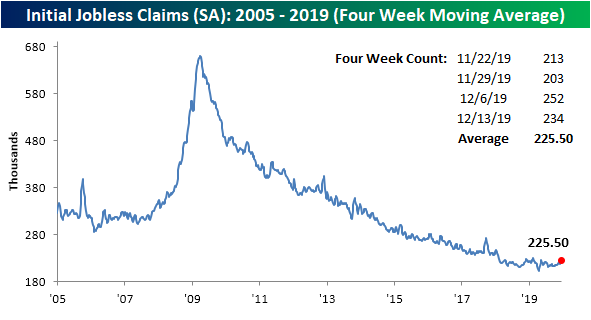 Given this, it has been some time since the four week moving average has made a new cycle low.  In fact, the moving average is now 24K above the April low of 201.5K.  As shown in the chart below, this is the widest spread between a weekly reading and the cycle low in more than a year, but there have also been prior times that the spread has been far wider such as in 2011, 2012, 2013, and 2017. Despite this, outside of April, most of the past year has seen claims fairly elevated above its lows.

Expanding on this, while the distance between the last low and the current level could be worse, the current streak without a new low is now the second longest of the current cycle at 35 weeks long, passing the 34 week long streak ending in May 2014.  If this continues for another seven weeks, it will take out the streak lasting 42 consecutive weeks ending in December 2012. 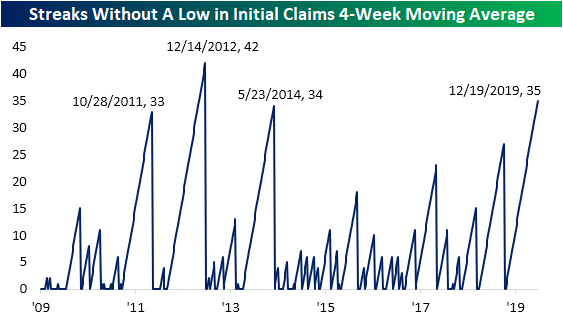 Seeing as it has been so long since we have seen a new low in the 4-week moving average for claims, it shouldn’t come as a surprise that 2019 has been relatively quiet on the new low front.  In fact, there were only two weeks that saw a new low get put in place this year, both occurring in April. As shown in the chart below, no other year of the current cycle has seen so few of such weeks. Start a two-week free trial to Bespoke Institutional to access our interactive economic indicators monitor and much more. 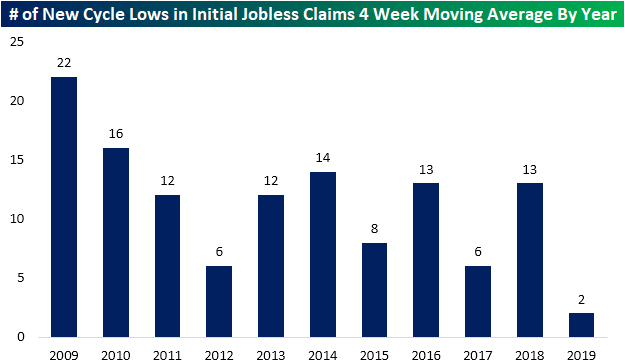