Today’s ISM Services report for the month of August came in slightly lower than forecasts, but one of the bigger stories in the report was the trend of rising prices.  The Prices Paid component of August’s report rose to 64.2 which is not far from the five-year high of 64.9.  Within the monthly commodities survey, there were price increases all over the place. Respondents in this month’s report noted prices increases in 26 commodities and declines in just four.  The 26 commodities rising in price is the highest since October 2017.  Not only that, but respondents also noted that 22 commodities were in short supply.  Anyone with a basic understanding of economics can tell you that when commodities become scarce, they usually rise in price.  Therefore, there’s likely a healthy pipeline of commodities that have the potential to show up in the “Up in Price” section.

Combining the results from today’s ISM Services report with the commodity survey from Tuesday’s ISM Manufacturing report, a total of 41 commodities were up in price during the month of August while just six were down.  That net reading of 35 ranks as the highest in just over two years (July 2018). The chart below compares the six-month average of the net number of commodities rising in price and y/y CPI going back to 1999.  As the chart illustrates, trends in the commodities survey typically track and often lead changes in y/y CPI, and while the six-month average has now been trending higher for a few months now, CPI is only just starting to tick higher.  Not only that but in the next three months, the moving average of the commodities survey is only going to keep rising.  Start a two-week free trial to Bespoke Institutional for full access to our research and interactive tools. 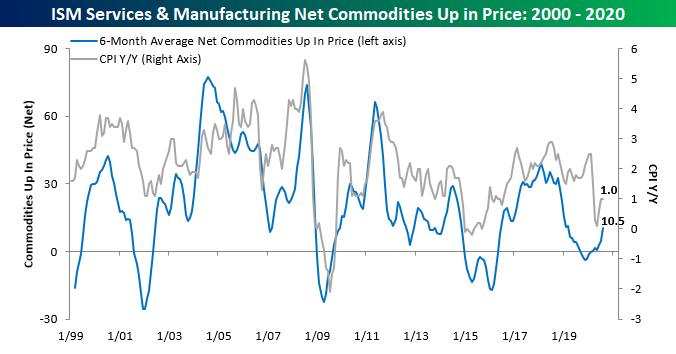