No Case of the Mondays to Be Found

The S&P 500 is hitting a record high to start out the holiday-shortened week. As we noted last week, the past couple of decades have seen particularly strong performance on the Monday of Thanksgiving week, but Mondays have also been consistently strong for the current bull run.  In the table below, we show the average daily change in basis points (bps) of various assets (proxied by ETFs) by day of the week since the COVID crash low on 3/23/20.

The market hasn’t seemed to have a case of the Mondays yet during this bull market with Mondays consistently ranking as the strongest day of the week for the S&P 500 (SPY), S&P 500 Value (IVE) and Growth (IVW), the NASDAQ 100 (QQQ), Russell 2,000 (IWM), and MSCI EAFE ETF (EFA).  In the commodities space, Mondays have also been the strongest day of the week for Gold (GLD).  While Mondays haven’t been the strongest day for the Emerging Markets excluding China ETF (EMXC)—we chose EMXC rather than the MSCI Emerging Market ETF (EEM) due to EEM’s outsized weighting of China/Hong Kong—it has tended to start the week strong with an average gain of 27 bps gain on Monday followed by a 29 bps average gain on Tuesdays.  Crude Oil (USO), Long Term Treasuries (TLT), and the US Dollar (UUP), on the other hand, have all experienced weak Mondays followed by stronger returns on Thursday or Friday. They are also the only two ETFs in the matrix below that have averaged declines on more days of the week than they have averaged gains.

Taking a closer look at these trends over the course of the current bull market, in the charts below we show the cumulative performance of $100 invested in each of these ETFs beginning on 3/23/20 owned only on specific days of the week.  For US equities, Monday strength distanced itself from the rest of the week early on in the pandemic era.  For S&P 500 Value (IVE), the end of the week has also been distancing itself this year as the other notably strong day of the week. For Growth (IVW) and the NASDAQ (QQQ), Thursdays have been particularly strong of late. 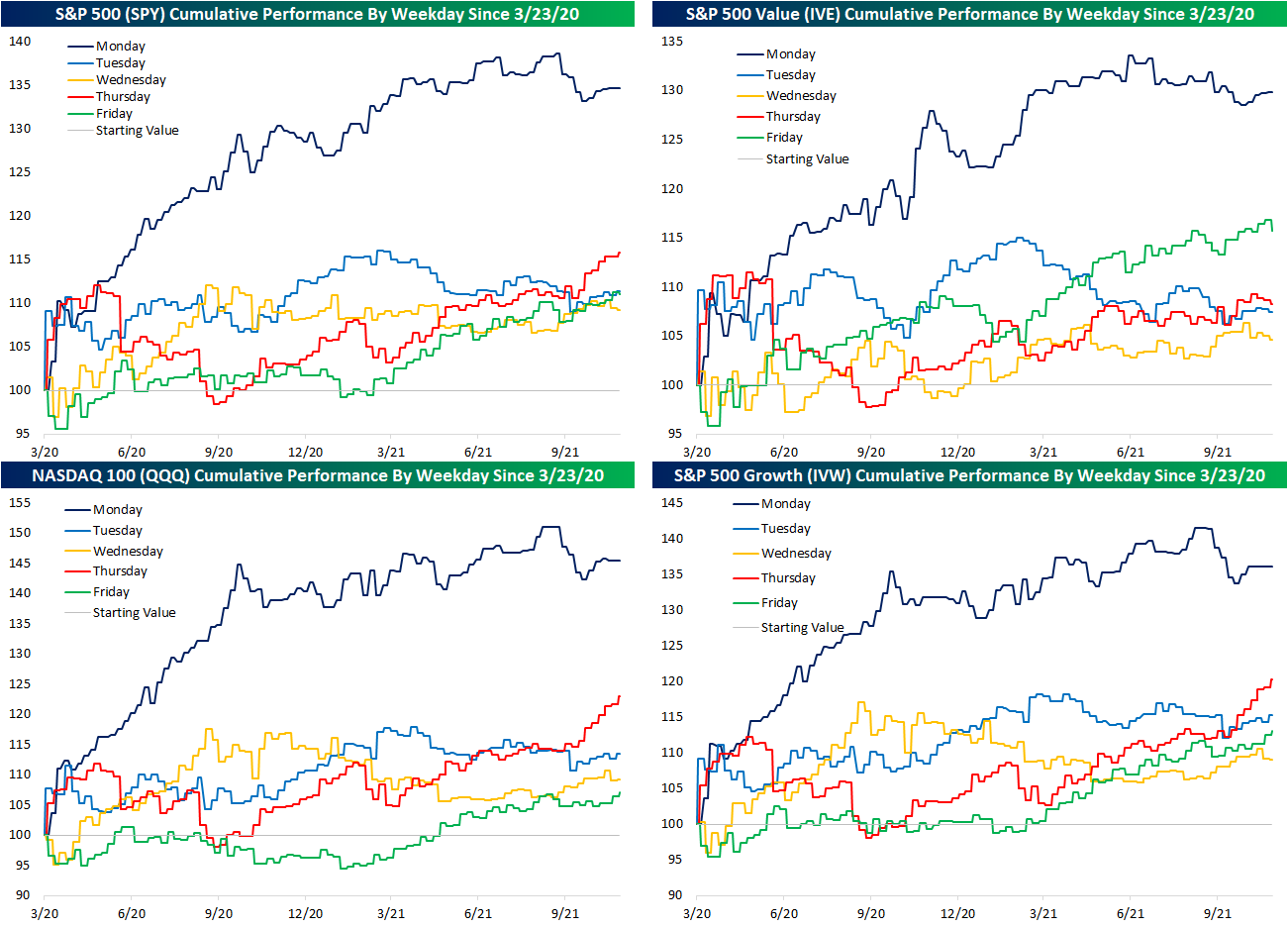 Looking abroad, the MSCI EAFE ETF (EFA) and MSCI Emerging Market ex. China ETF (EMXC) have both seen outperformance on Mondays too. For the latter though, Tuesdays have been running right in line all year and Wednesdays are not that far behind.  The second half of the week has been essentially flat. 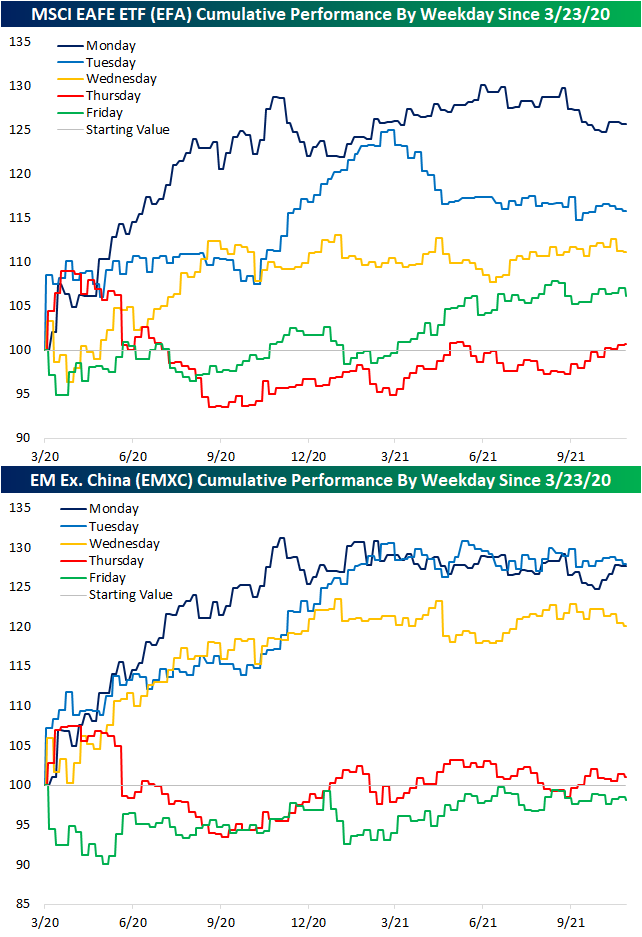 Turning to commodities, Gold (GLD) has also seen strength on Mondays, but that is about the only silver lining.  Holding on Tuesdays and Thursdays would also see some appreciation but that strategy has seen declining over the past several months.  Wednesdays only recently moved out of the red while Fridays have barely recovered.

For Crude Oil (USO), holding in the first half of the week has been a losing strategy, although it has been steadily improving. Holding on Wednesdays has seen a sharp turn lower over the past several weeks. 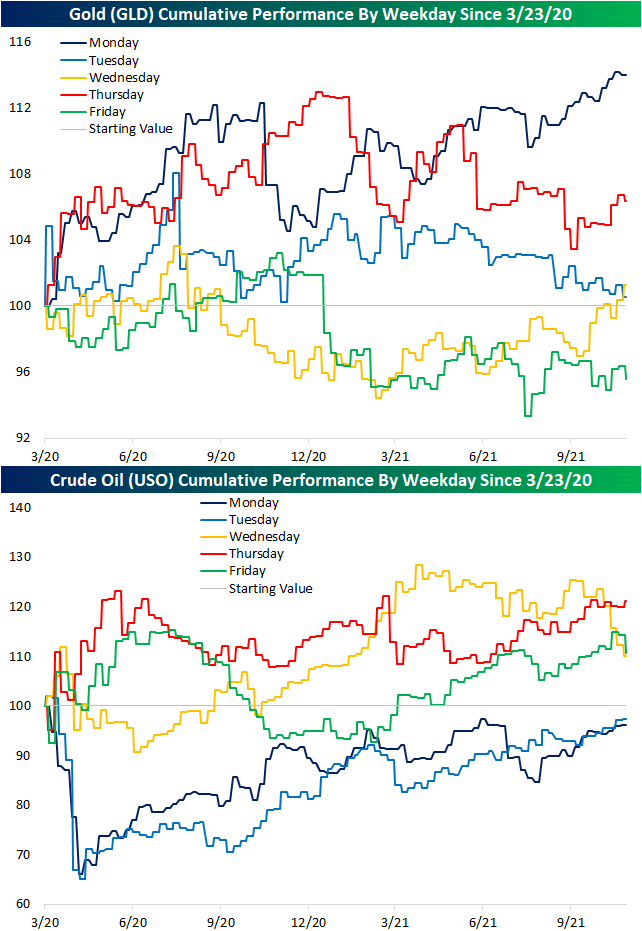 USO is not alone in having a bad first half of the week. For US Long Term Treasuries (TLT), the only day of the week that currently is not in the red is holding on Thursdays.  For UUP, the only days of the week that have a cumulative gain since March 2020 are Wednesdays and Fridays, and for those two days, the gains are only minimal. Click here to view Bespoke’s premium membership options. 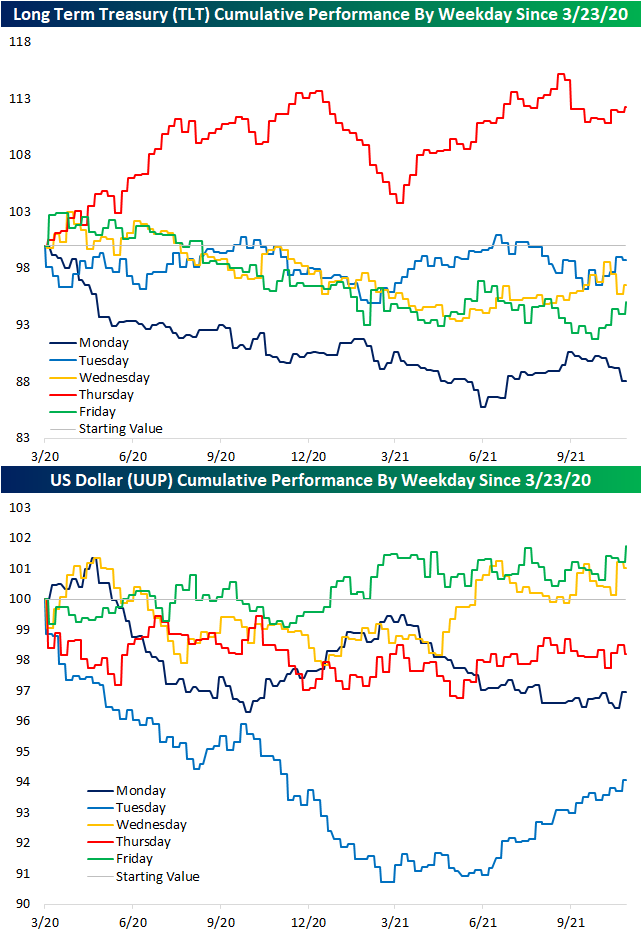