Even though most economic data releases this week that had forecasts exceeded those estimates (10 of 15), data continues to come in very weak. The Chicago Fed’s National Activity index started off the week coming in at –4.19 which was well below estimates of –3. Existing home sales followed up on Tuesday, and despite coming in above estimates, sales slowed considerably from February. Elsewhere in housing data, new home sales collapsed down to 627K SAAR compared to 765K last month. Meanwhile, February home prices showed some acceleration. Jobless claims also were better than expected, but they too remain at extremely elevated levels relative to the rest of history. Manufacturing data was a major area of weakness this week. Both the preliminary Markit PMI and Kansas City Fed reading fell significantly despite coming in better than forecast. Hard manufacturing data on Friday was likewise bad at the headline level though under the hood there were some silver linings. 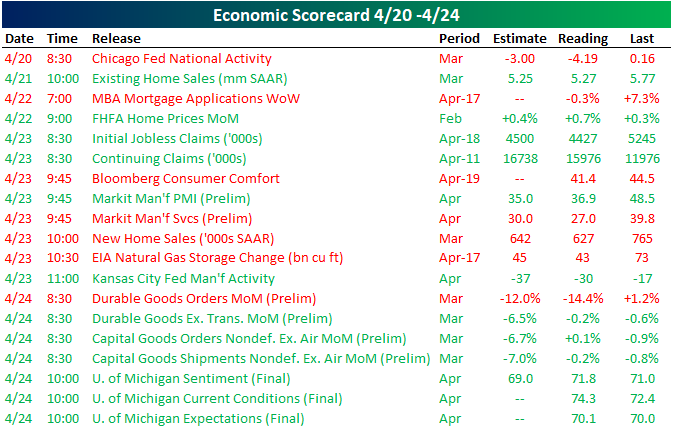 Turning to next week, like the earnings calendar, the economic calendar ramps up with a total of 34 releases. We will get the final two regional Federal Reserve indices from Dallas and Richmond on Monday and Tuesday, respectively, followed by the final Markit and ISM reading for April on Friday. Wednesday will be the most closely watched day of the week with the first release of Q1 GDP as well as an FOMC rate decision. Growth in the first quarter is expected to show a 3.8% contraction. Although no change in rates is being forecast, Fed Chair Powell’s following presser will likely be closely watched for a monetary policy update. Start a two-week free trial to Bespoke Institutional to access our interactive economic indicators monitor and much more. 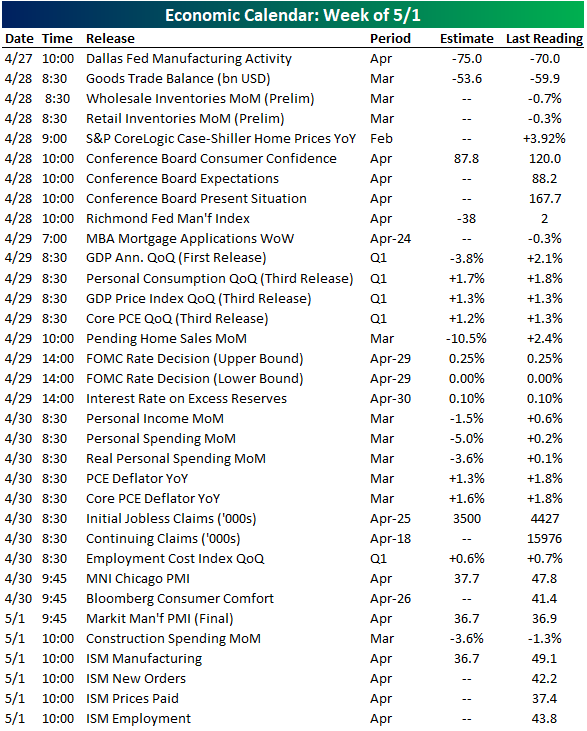