Even with a holiday and a shortened session Friday leaving no US releases in the past 48 hours, it was a very busy week for economic data with 36 releases in the first three days.  Most of this data came in stronger than expected or above the prior reading where there were no forecasts.  While the bulk of the week’s data was strong, manufacturing data, namely from the regional Fed indices, was mixed. We started off with a weaker Chicago Fed National Activity Index on Monday.  The index fell from -0.45 last month to -0.71 rather than the expected improvement to -0.2.  The Dallas Fed’s index was also out on Monday and it improved more than expected as well as versus the prior month. On Tuesday, the Richmond Fed’s gauge on manufacturing was also worse than expected. On the bright side, other manufacturing hard data like durable goods came in much stronger than both the previous month and consensus forecasts.  Housing data was also solid this week with better than anticipated home price growth shown in two of the three indicators: the quarterly Home Price Purchase Index, FHFA, and Case-Shiller (only the Case-Shiller index was weaker than expected, albeit up from the prior month). The second release of third-quarter GDP was the most notable indicator of the week with a much stronger than expected reading which showed the economy grew by 2.1% QoQ versus estimates of a 1.9% growth rate. 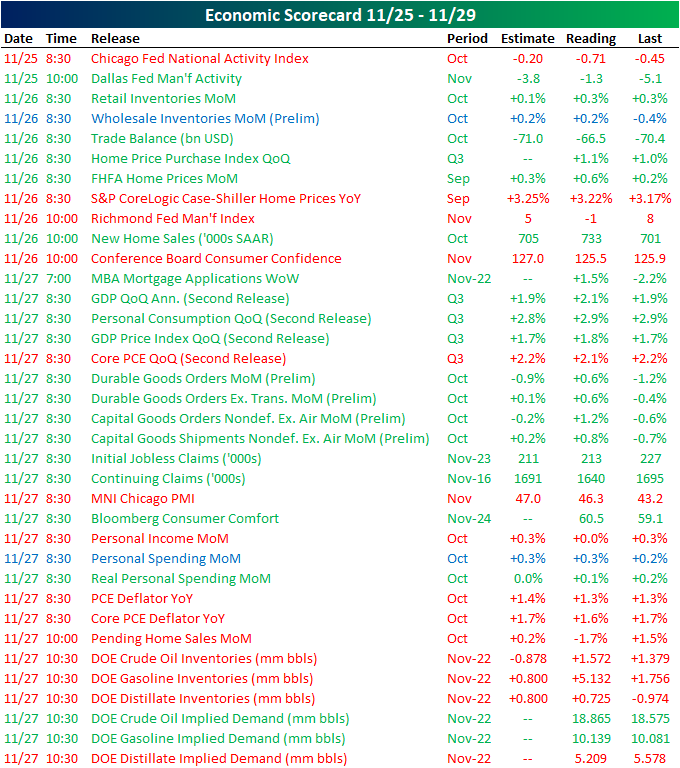 We kick off December with another busy few days next week.  Final November Markit and ISM numbers will kick off the week on Monday. While Markit is not expecting any change from the preliminary readings, ISM is expected to improve to 49.2 which would still be a contractionary print.  In hard manufacturing data, later in the week we will see final durable and capital goods numbers for November.  Vehicle sales figures will be the only release on Tuesday followed by the service counterparts to Markit and ISM indices on Wednesday as the rest of the week’s main focus will be on labor data.  After a surprisingly strong release last month, Nonfarm Payrolls is again expecting a strong print showing 190K jobs created in the month of November.  Start a two-week free trial to Bespoke Institutional to access our interactive economic indicators monitor and much more. 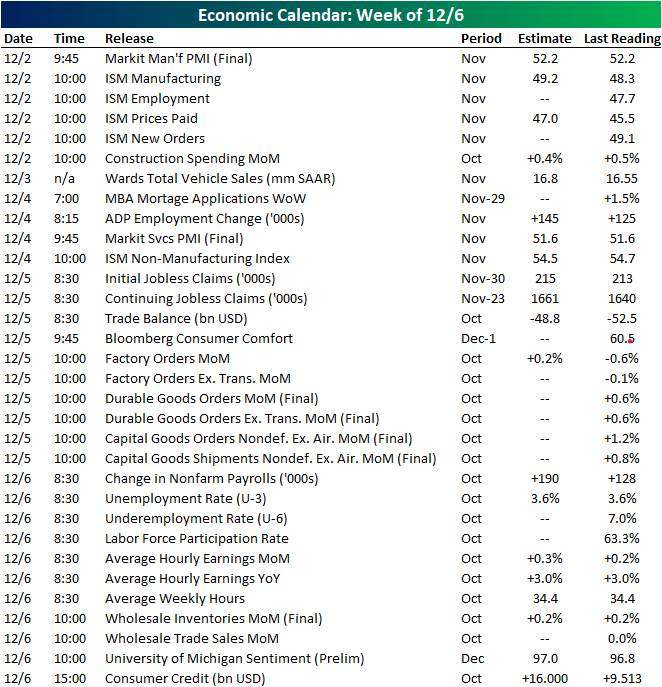