It was an extremely busy week for economic data with over 40 releases on the calendar. A vast majority came in either inline or worse relative to expectations or the previous period, while only 27% of releases came in stronger than expected or above the prior reading.

The Chicago Fed’s National Activity Index was the first release of the week, turning back into negative territory in September. The Dallas Fed’s Manufacturing Activity index was also released on Monday and also missed estimates while shifting negative. The Conference Board’s reading on consumer confidence also softened unexpectedly as the spread between present conditions and expectations widened further. Housing data was somewhat mixed as prices slowed slightly, but pending home sales was much better than expected. Wednesday’s GDP release also came in stronger than expected with solid personal consumption. Core PCE and other inflation indicators like the Employment Cost Index were inline with expectations. Finally, Wednesday also saw the FOMC rate decision which resulted in rated cut another 25 bps, as expected. ADP’s stronger than expected employment data, preceded a solid NFP Report on Friday. Nonfarm Payrolls were expected to show 85K added jobs in the month of October which would have been a substantially weaker number than the 136K increase the prior month. Instead, actual results showed 128K added jobs, which was better than all but the highest of estimates (140K). Another focus on Friday was the Markit and ISM readings on manufacturing. Both were expected to improve from the prior month which they in fact did but by less than estimates were calling for.  Markit’s preliminary PMI was originally showing a stronger reading of 51.5. Instead, the final reading came in at 51.3 which was still the highest reading since April so the report wasn’t entirely bad.  Meanwhile, the ISM index ticked up off of last month’s reading of 47.8, its lowest levels since June of 2009.  This was in part thanks to the readings on new orders and employment improving. Aside from these improvements, ISM’s indices—unlike Markit—are still showing contraction in the manufacturing space. 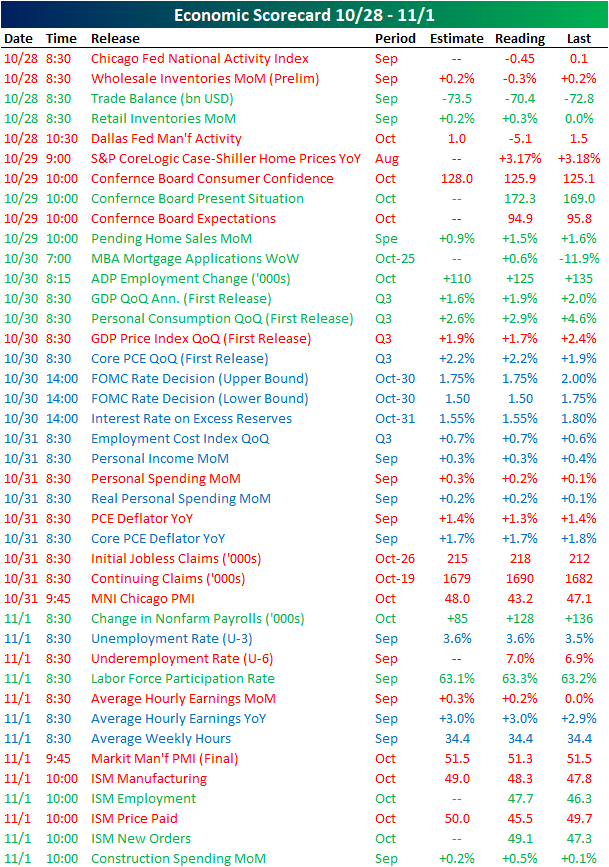 The economic calendar slows down next week with around half as many releases as this week. Final durable and capital goods data and factory orders will take up the entirety of Monday’s reports. Durable goods orders are not expected to show any change from the preliminary readings, but factory orders are expected to show moderation in September. On Tuesday, we will get the services counterparts to today’s ISM and Markit manufacturing gauges. While both manufacturing readings missed, ISM’s Non-Manufacturing index is anticipated to rise to 53.5. Quarterly mortgage delinquencies and foreclose data will also be out on Tuesday. Wednesday will see more quarterly data with the Q3 preliminary releases of Nonfarm Productivity and Unit Labor costs. Following this week’s weaker Confidence report from the Conference Board, next Friday we will get further clarification on sentiment with the University of Michigan’s preliminary November data. Start a two-week free trial to Bespoke Institutional to access our interactive economic indicators monitor and much more. 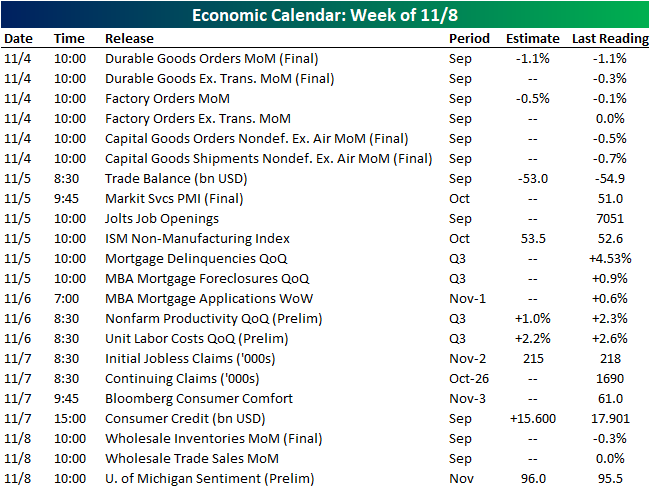