All-in-all, it was a pretty mixed week for economic data, specifically manufacturing and labor data. While Markit’s gauge on manufacturing was slightly stronger than both expectations and the August print, ISM’s version disappointed with little in the way of bright spots among its components. Hard data, on the other hand, is showing a bit of a different picture as Durable Goods appear healthy with the fastest 3m/3m growth rate since last November as we discussed in Thursday’s Closer. The Markit Services PMI and ISM’s Non-Manufacturing Index were also split with Markit’s reading holding steady as ISM disappointed once again. Employment data was the other major focus of the week with similar disappointments, but some silver linings. Ahead of Friday’s Nonfarm Payrolls Report, ISM’s Employment components for both the Manufacturing and Services sectors further weakened in September while this week’s initial jobless claims rose slightly more than expected (although continuing claims fell again). ADP’s reading on employment also fell more than expected. The NFP report followed suit showing fewer jobs added in September, but new lows in the unemployment rate and underemployment rate added to the case of continued labor market strength. 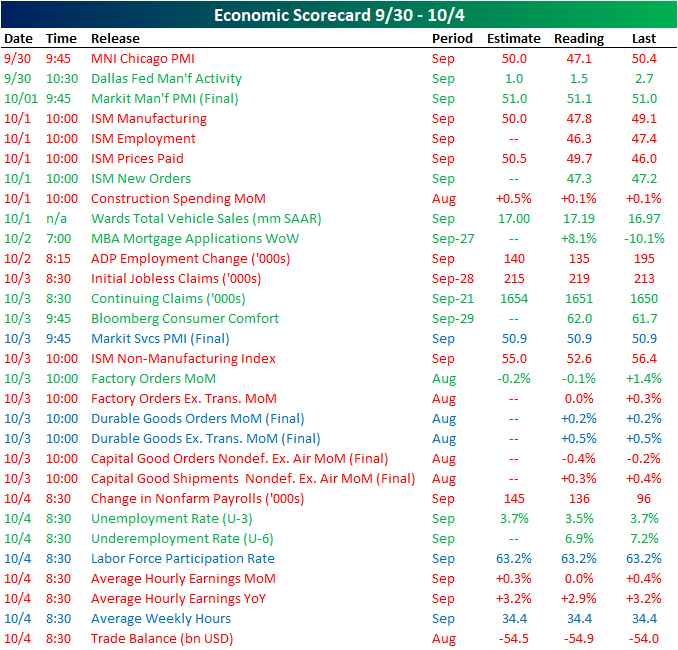 Economic data takes a bit of a breather next week with only two-thirds as many releases this week. Consumer credit is first up on the docket and is expected to moderate to $15 billion after a very strong print last time around. On Tuesday, we will get confidence numbers out of the small business world. NFIB’s Small Business Optimism is forecasted to fall to 102.5 from 103.1 in August. PPI is also out that morning, although no change is expected for both the headline and core numbers. CPI data is due to be released later in the week on Thursday and likewise, no change is expected. Further in inflation data, on Friday, import and export price indices are also scheduled to be released. In labor data, the Job Openings and Labor Turnover Survey (JOLTS) will come out on Wednesday followed by weekly claims numbers the following day. After rising to 219K this week, claims are expected to improve to 217K. Finally, Friday’s preliminary University of Michigan Sentiment for October will round out the week. It is expected to fall to 92.0 after last month’s rebound up to 93.2. Start a two-week free trial to Bespoke Institutional to access our interactive economic indicators monitor and much more. 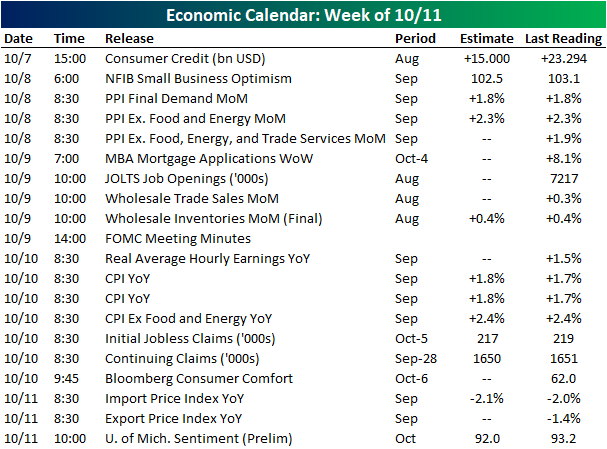