It was a disappointing week for US economic data as two-thirds of releases came in weaker than expected or than the prior period. Consumer Credit data for the month of August was the only major release on Monday, exceeding expectations, but declining from July’s level. Inflation data took the spotlight this week with the release of PPI, CPI, and export and import prices. Core CPI was inline with the previous month and the import price index’s decline (year over year) was smaller than forecasted, but other readings on inflation were weaker. Likewise, labor data had its share of disappointments as the JOLTS report showed a third consecutive decline in openings, hourly earnings growth slowed, and continuing claims ticked higher. Initial Jobless Claims provided some relief though, coming in at 210K compared to 220K expected and 219K last week. While small business optimism was weaker—NFIB’s index fell to 101.8 from 103.1—consumer sentiment readings from Bloomberg and the University of Michigan both rose with the latter exceeding expectations. 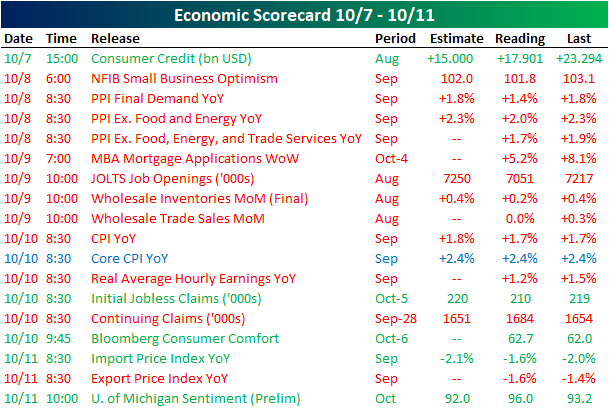 Looking ahead to next week, the calendar is slightly busier with 22 releases on the docket in addition to earnings beginning to ramp up as a total of 115 companies report. There are no scheduled economic releases Monday due to Columbus Day, so next week’s data begins on Tuesday with Empire Manufacturing which is forecasted to fall from 2.0 to 0.5. Other manufacturing gauges, including the Philadelphia Fed’s index and industrial production, are also expected to fall. Retail Sales is scheduled for Wednesday and are expected to rise 0.3%. On Thursday, Housing Starts and Permit data are both expected to show moderation. The leading index is scheduled to round out the week on Friday. Start a two-week free trial to Bespoke Institutional to access our interactive economic indicators monitor and much more. 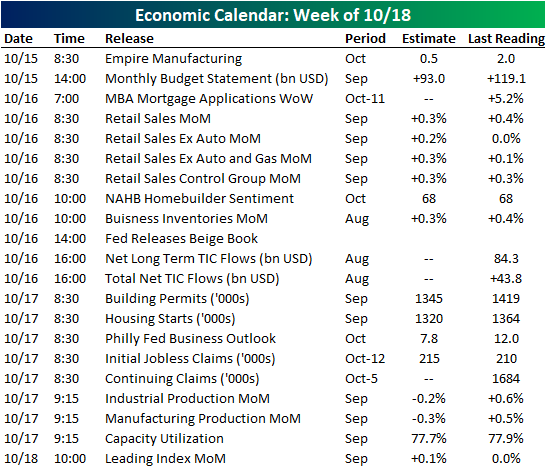