The Institute for Supply Management’s August reading on the manufacturing sector showed a third straight month of accelerating expansionary activity.  The headline index rose to 56 compared to expectations of 54.8 and 54.2 in July.  That is now the highest level of the index since November of 2018 when it read 58.8.

Breadth across each of the individual components of the report continues to be solid with just about every index higher month over month. The only two indices to fall were both for inventories. The index for Employment along with these indices for Business Inventories and Customer Inventories are also the only ones that remain in contraction as has been the case for the past few months.  Employment has been on the rise over the past few months, so it’s not all bad though. Additionally, the declines in inventories may not necessarily be a bad thing as it coincides with strong demand and rising production, meaning strong demand is likely drawing on inventories rather than supply issues.

Demand is extraordinarily strong. Consistent with solid readings for New Orders across regional Federal Reserve manufacturing surveys, the ISM’s reading on New Orders has consistently risen over the past few months and is now around the top 5% of all historical readings going back to 1948. The 6.1 point increase to 67.6 leaves the index at its highest level since the final months of 2003/January of 2004.  Prior to that, you have to go all the way back to 1983 to find a time that New Orders were this strong.  That is an enormous turnaround compared to where things stood as recently as April when the index was at its low of 27.1; in fact, it is the most the index has risen in four months on record (second chart below).  The 40.5 point rise in New Orders in that time surpasses a 39.5 point increase that went from June to October of 1980. 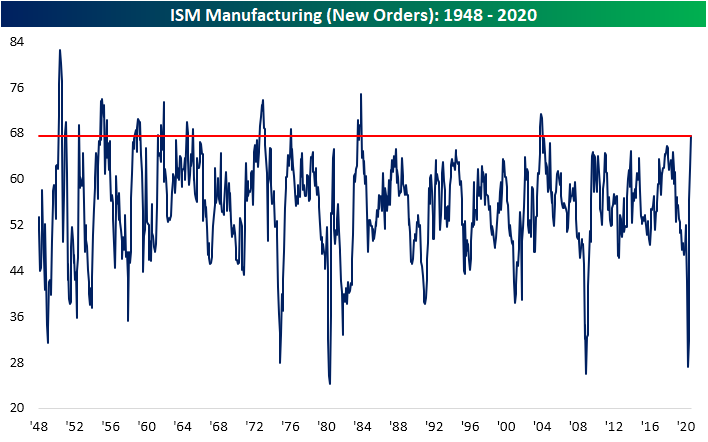 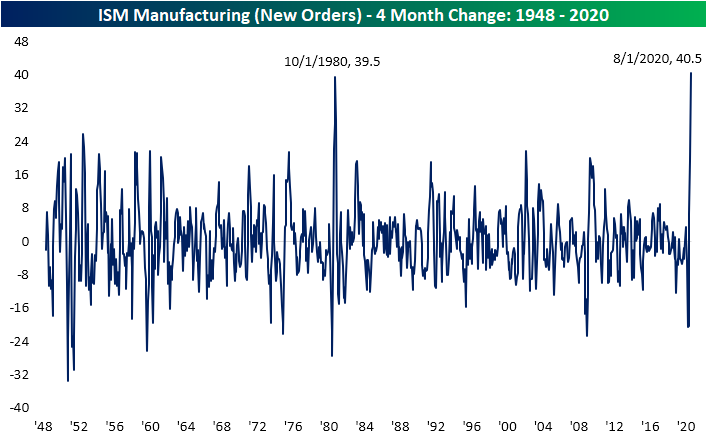 Given the historically strong demand, manufacturers continue to ramp up production.  That index rose to 63.3 from 62.1 last month.  That is the strongest reading since January of 2018.

Additionally, US manufacturers also appear to be ramping up general trade activity as both indices for Imports and Exports have risen.  Export Orders index are at the same levels as January of this year after rising 2.9 points this month while Imports are even stronger at their highest level since June of 2018. Assuming those imports are mostly inputs, that could be a positive sign for future production. 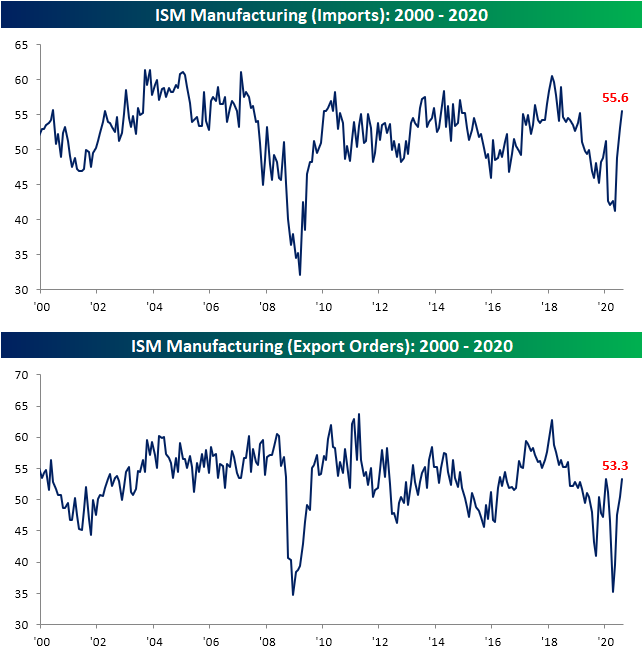 Even though production continues to rise, it still appears that demand is outpacing supply as Backlog Orders also expanded for a second straight month.  Backlog orders rose 2.8 points to 54.6.  That 2.8 point month over month increase is in the top decile of all monthly changes and leaves the index at the highest level since November of 2018.

For Customer Inventories, that was the largest decline in a single month since December of last year and that is now the lowest level in over a decade with the last time it was this low being June of 2010. With inventories dwindling and demand historically elevated, these should act as tailwinds for future improvements to employment and production (as well as prices)
Click here to view Bespoke’s premium membership options for our best research available. 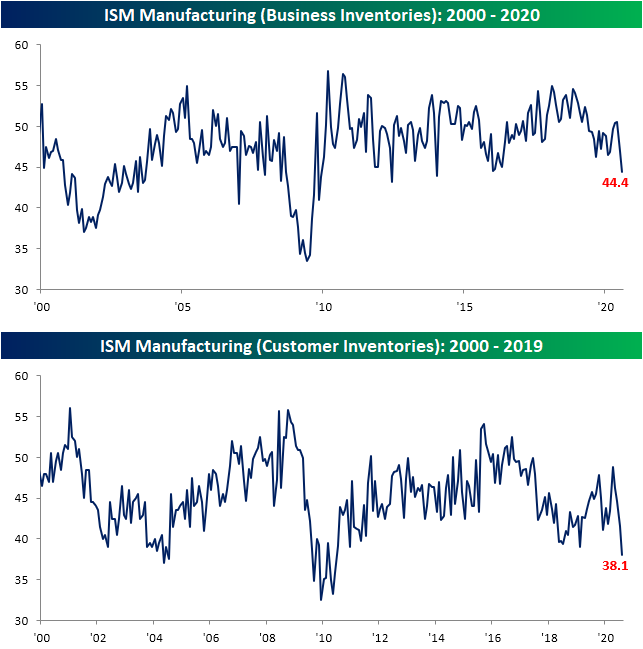