Earlier today, we noted in a tweet that despite the record highs for the S&P 500, the number of stocks hitting 52-week highs was extremely weak at 38.  While that number improved slightly this afternoon, at 40 it’s still very low for a day when the index itself is hitting a new all-time high. While the overall number of stocks hitting new highs is very low, we can take some consolation in the fact that more than one-third of the index is within 5% of a new high, so if we see a few more days like Monday, the list of new highs should start to meaningfully expand.

The table below summarizes the percentage of stocks in each sector that are within 5% of a new high.  Topping the list is Utilities where more than half of the sector’s components are less than 5% from a new high.  Behind Utilities, nearly half of stocks in the Industrials sector are also on the verge of a new high.  At the other end of the list, Energy has the fewest components within 5% of a 52-week high at just 7%, and then three other sectors have a quarter or fewer of their components at new highs (Health Care, Consumer Staples, and Materials). 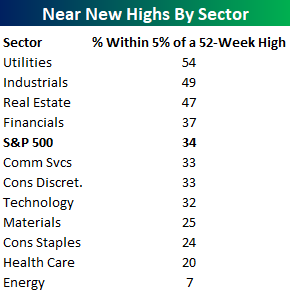 The chart below is the same as the one above, but instead of sorting the components by the distance from their respective 52-week highs, we sorted it first by sector and then by the distance from a 52-week high.  Five sectors currently have at least one component that is down over 50% from a 52-week high (Consumer Discretionary – Macy’s and L Brands, Consumer Staples – Kraft Heinz, Energy – Concho Resources and Cimarex, Health Care – ABIOMED, and Technology – DXC Technology and Alliance Data Systems).  On the other end of the spectrum, if you look closely at the chart, you can see that for both the Financials and Industrials sectors, a number of stocks are very close to 52-week highs.  For the Financials, 12 components are within 2% of a new high while 20 members of the Industrials sector are just within the 2% threshold as well. Start a two-week free trial to Bespoke Institutional for full access to some of the most sought after research on the street.