Never Been Better for Builders

It is hard to believe that housing-related indicators could continue to impress, but the NAHB’s reading on homebuilder sentiment released this morning did just that.  The headline reading was expected to hold steady at what was a record high of 85. Instead, the index set the record high bar even higher as it rose 5 points to 90.

Not only does the index sit at an all-time high, but the 5-point move this month was in the top 10% of all month over month changes.  The same can be said for the index for Present Sales as well as sentiment in the Midwest and the South. Overall, just about every sub-index of the report was higher this month and rising to new record highs. The Northeast was the only holdout as that index fell 5 points, but at 82 it is still at its second-highest level ever.  With more records this month, every index has made a new record in at least two of the last three months. The headline index, Present Sales, and Future Sales have done so in back to back to back months. 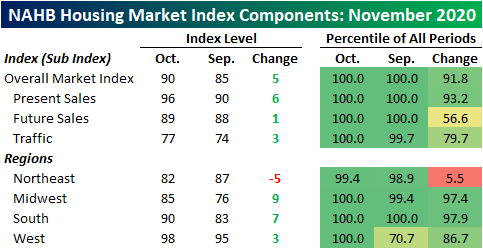 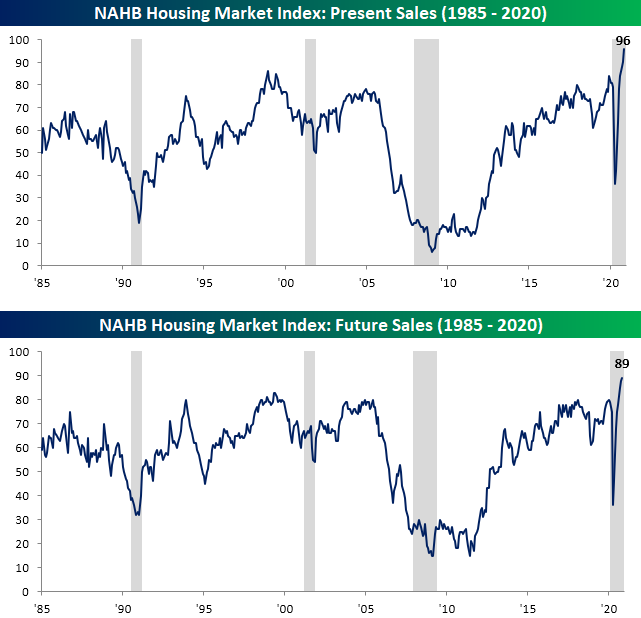 As previously mentioned, there has been strength in homebuilder sentiment across the country regardless of region.  Even though the Northeast declined 5 points (a historically large month over month decline around the bottom 5% of MoM changes), it still sits well above anything observed throughout the history of the data.  The same can be said for the Midwest, West, and South.

Even though homebuilder sentiment is strong, sentiment for the industry’s stocks has waned. The S&P 1500 Homebuilders group last put in a high roughly one month ago. In the days since then, it has been consolidating between support at the early September lows and its sideways trending 50-DMA.  From a technical perspective, homebuilder stocks are at a bit of a crossroads as the price action of the past few months has set up what’s looking like a head and shoulders pattern. On the bright side, last week’s bounce that has carried into this week has not confirmed the completion of that pattern. But conversely, even with the catalyst of homebuilder sentiment today, the index has not been able to make a significant push back above its 50-DMA. When stocks stop rising on good news, it warrants attention. Click here to view Bespoke’s premium membership options for our best research available. 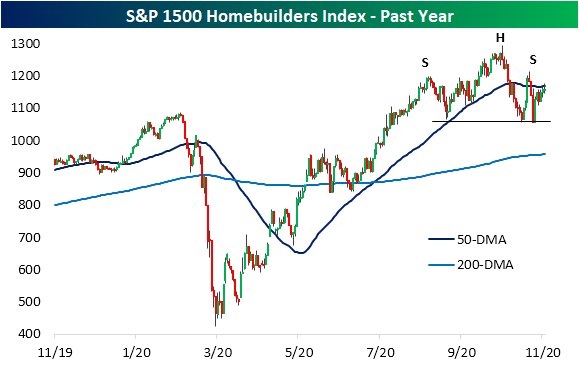