Neutral Sentiment Still On The Rise

After a sharp 7.7 percentage point rise last week, bullish sentiment as measured by the American Association of Individual Investors (AAII) weekly survey pulled back this week falling to 40.2%.  While lower, that is still a few percentage points above the levels observed throughout most of May and is roughly 2 percentage points above the historical average of 38.03%. From a contrarian perspective, the more modest readings on sentiment recently are a welcome change from the elevated readings seen earlier this spring and in the winter. 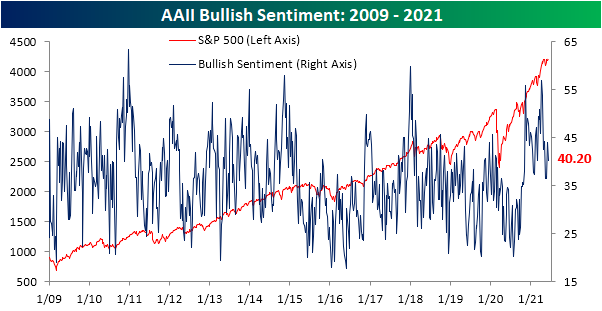 Bearish sentiment tipped back above 20% this week, though, that is still a muted reading in the bottom 5% of the past decade’s range. In fact, the current level of bearish sentiment is around 10 percentage points lower than the historical average of 30.5%.  Looking at another sentiment reading, the Investor’s Intelligence survey of newsletter writers saw bearish sentiment fall to 16.2% which is the lowest level since September. 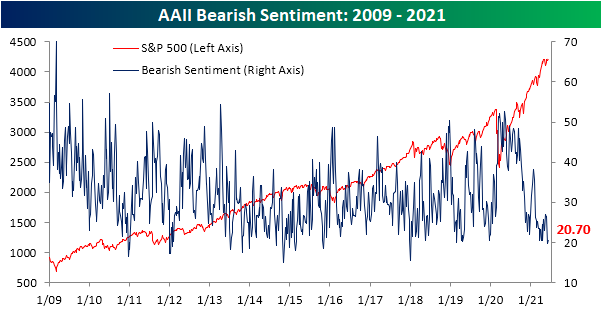 That means sentiment continues to largely favor the bulls, but the drop in bullish sentiment was not matched by an equivalent rise in bearish sentiment. Instead, the bulk of those losses went into the neutral camp.  The percentage of investors reporting as neutral has continued to climb reaching 39.1% this week. As has been the case consistently over the past month, that is the highest level in neutral sentiment since the first few weeks of January 2020 when over 40% of respondents reported as such. Click here to view all of Bespoke’s premium membership options. 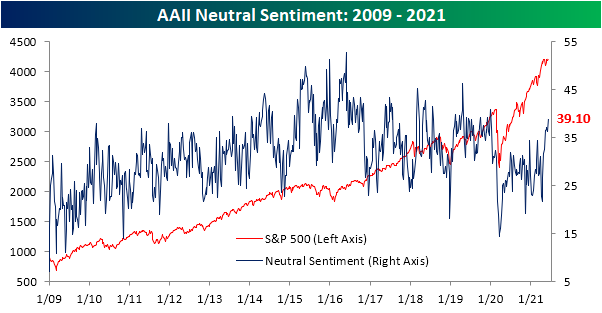