Neutral Sentiment Plunges as Bears Move Back Above 50%

As the S&P 500 enters correction territory, sentiment has further degraded.  Once again this week, less than a quarter of respondents to the weekly AAII sentiment survey reported as bullish. Although it was an improvement from 19.2% last week, the current reading of 23.4% remains in the 6th percentile of readings going back to the start of the survey in 1987. We would also note that while there are a range of potential factors that have likely played a role in the recent drop in sentiment ranging from price action to forecasted paths of interest rates to geopolitical tensions, this week’s survey likely did not fully capture changes to sentiment from the news surrounding the situation in Ukraine. More specifically, the collection period would not have captured today’s news of escalation. 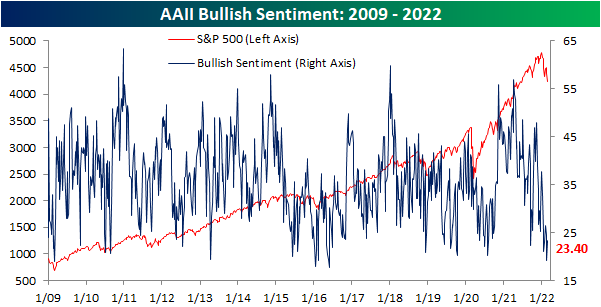 Bearish sentiment crossed above 50% as recently as the last week of January, and after falling all the way back down to 35.5% earlier this month, it is now back above 50%. In fact, bearish sentiment surpassed the January high of 52.9% by 0.8 percentage points this week to reach the highest level since April 2013.  Back then it was only slightly higher at 54.48%. The two-week increase since the low on February 10th now ranks in the top 3% of all two-week changes on record.  As for other sentiment surveys, the bearish results are being echoed with the Investors Intelligence survey seeing the highest bearish reading since April 2020. 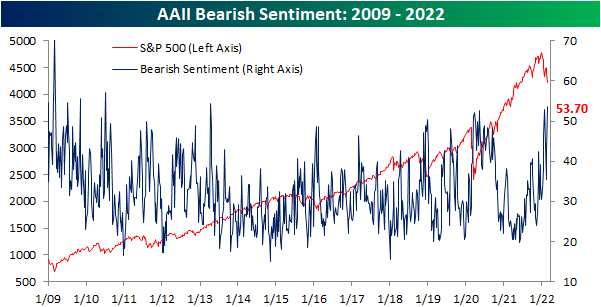 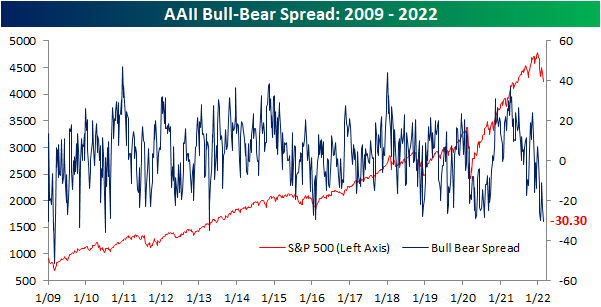 With both bullish and bearish sentiment rising, each reading’s gains have borrowed heavily from neutral sentiment. Neutral sentiment has gone from a multi-year high of more than 40% only two weeks ago down to the lowest level since last April this week.  The bulk of that decline occurred since last week’s survey as neutral sentiment plummeted 14.7 percentage points week over week. There has not been as large of a decline in neutral sentiment since February 2003. 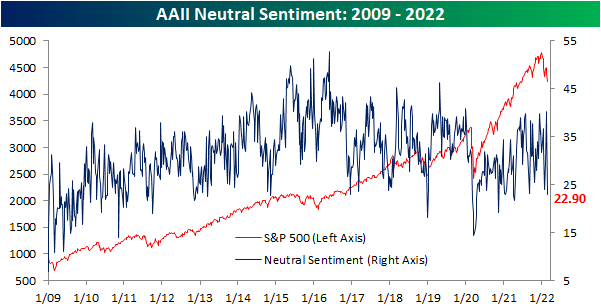 Given how severe of a decline neutral sentiment experienced this week, in the table below we look back at all other times that this reading has experienced a double-digit percentage point decline for the first time in at least six months.  Of the baker’s dozen of prior occurrences, the current instance ranks as the second-largest decline in neutral sentiment behind the August 1994 instance when it fell 15 percentage points. There were also three other times—March 2005, July 2010, and April 2013—when, similar to now, bearish sentiment was above 50%.  Overall across these past occurrences, the S&P 500 has tended to outperform in the short term but longer-run performance (3 months to one year out) has been smaller than the norm for all periods.  In the three periods most similar to the present period, though, where nearish sentiment was also above 50%, forward returns three, six, and twelve months later were higher each time    Click here to view Bespoke’s premium membership options. 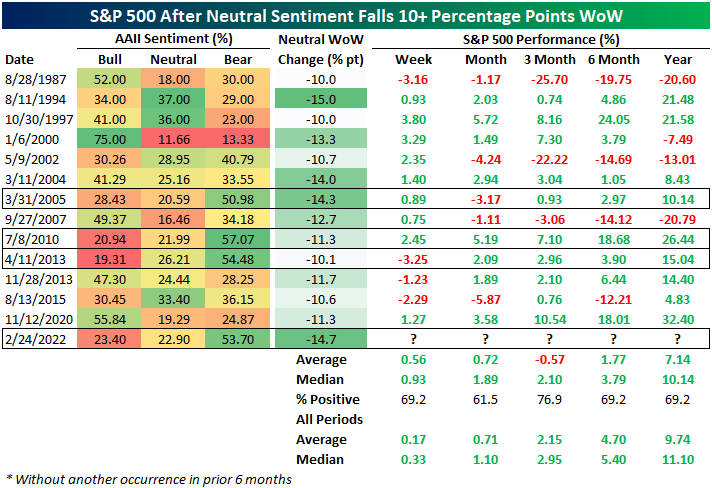