It has been quite a drama for Netflix (NFLX) in 2019.  After being up nearly 50% YTD and one of the best performers in the S&P 500 back in early May, NFLX has given up all of its YTD gains, falling by nearly a third from its highs and putting the stock in the red for the year. 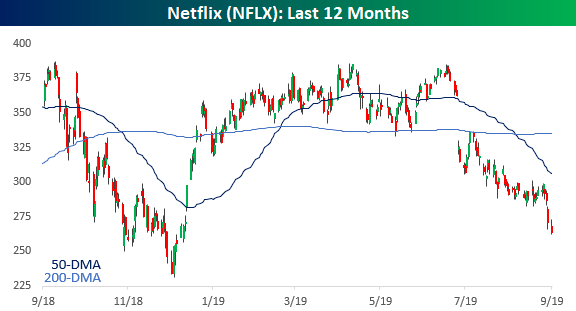 While the last five months have been pretty disastrous for Netflix (NFLX), it isn’t even the worst-performing stock in the S&P 500 since its closing high on 5/3.  The table below lists the 19 S&P 500 components that have declined more than 25% since 5/3.  Topping the list is DXC Technology (DXC), which has lost just under half of its value.  Behind DXC, Align Technology (ALGN) is the only other S&P 500 stock that is down over 40% since 5/3.  Outside of these two names, other notable names on the list of losers include retailers and retail-related names like Macy’s (M), Gap (GPS), PVH, Ulta Beauty (ULTA), Ralph Lauren (RL), Kohl’s (KSS), L Brands (LB), and Capri Holdings (CPRI). 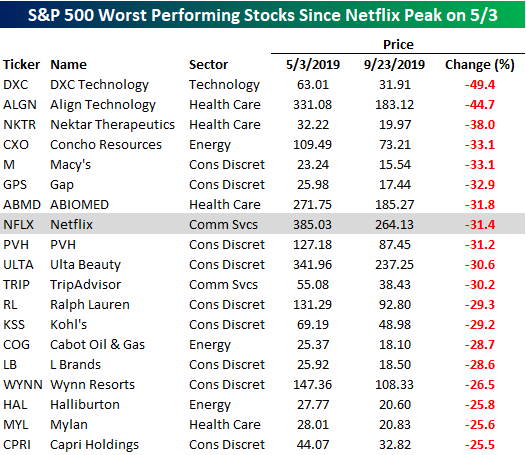 During the same span that Netflix (NFLX) has been giving up its YTD gains, a number of stocks have done quite well.  The table below shows the 25 stocks in the S&P 500 that are up over 20% since NFLX’s closing high for the year.  While the list of biggest losers is littered with retail-related names, Target (TGT) actually tops the list of winners with a gain of over 40%.  As far as themes are concerned, though, the names are spread out across practically every different sector.  Of the 25 names listed in the table, the only sector not represented is Energy, and besides Health Care which has five stocks on the list, no other sector accounts for more than three of the S&P 500’s top performers. Start a two-week free trial to receive our market research and access our interactive tools. 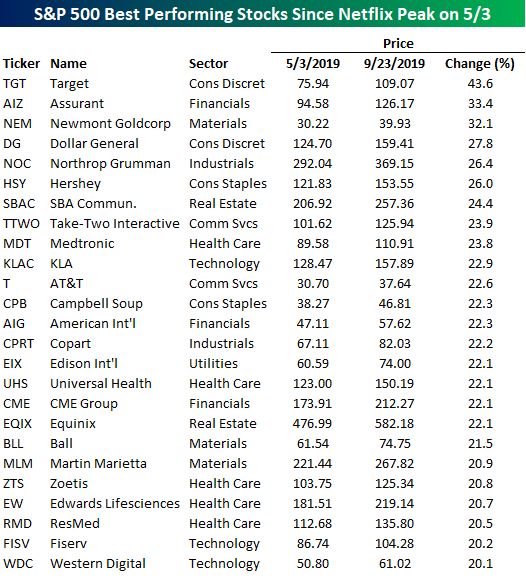