Netflix (NFLX) is one of the first mega-cap Technology/Communication Services stocks to report this earnings season with quarterly results due out after the closing bell tonight.  As with a swath of other mega-cap Tech stocks, NFLX has been in consolidation for much of the last year. NFLX has failed at multiple points to break out above resistance around the $550-$575 range including a pump fake following the last earnings report earlier this year. Stuck below those levels, the stock has mostly been fluctuating around its 50-DMA with some successful tests of its 200-DMA last month. 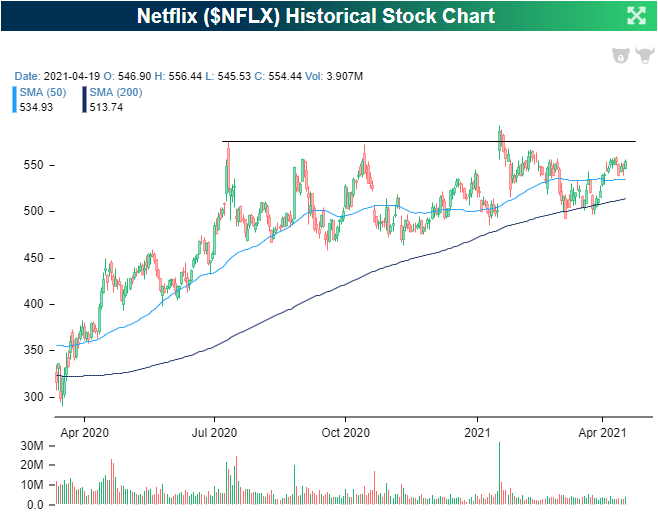 Below we show a snapshot from our Earnings Explorer showing the aggregate summary of past earnings results for NFLX. Across all quarters, the stock has averaged an absolute move of 12.28% in reaction to earnings. But reactions are highly seasonal. For example, most of the positive reactions have come on Q4 earnings days (January reports) when the stock has averaged a gain of 10.72% with a move higher almost three-quarters of the time. Last quarter was a prime example of this with NFLX rising 16.85% on its earnings reaction day, and that was in spite of missing on the bottom line. Comparatively, Q1 earnings (April reports) are not the worst in terms of stock price reaction (Q2 holds that title), but results do hold a negative bias.  Across all of NFLX’s past 18 Q1 reports, the stock has only seen a positive price reaction 39% of the time with an average decline of 1.04%. The last time that NFLX moved higher on Q1 earnings was in 2018 when it rallied 9.19%. Although reactions in Q1 have typically been negative, they are also the least volatile of any quarter (10.78%). Granted, that’s not saying much when it’s Netflix we’re talking about.  We would note though that the past two Q1 reports have seen much more modest declines of 2.86% and 1.31%. 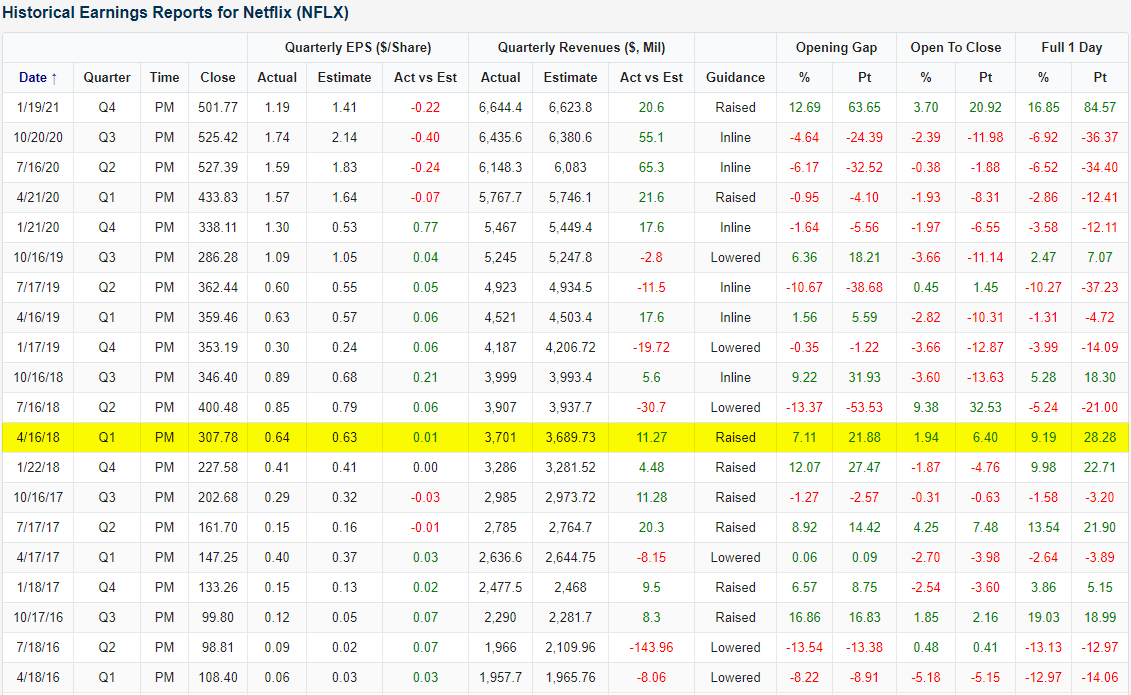 Given that historic volatility on earnings, there is a wide range of possibilities where NFLX could stand from a technical perspective after tomorrow’s reaction to earnings. While positive reactions are less likely, a positive reaction of a similar-sized move to the average volatility (+10.78%) could lead NFLX to break out above the past several months’ consolidation whereas a negative reaction of that size would see the opposite take place (yellow dot). An equivalent-sized move to the downside would result in NFLX falling below its 200-DMA and to the low end of its range (red dot).  Assuming a move the same size as the average for past Q1 reports—which is also a realistic possibility when looking at the past couple of years’ Q1 reports—the 1% decline would still leave NFLX above its 50-DMA. Click here to view Bespoke’s premium membership options for our best research available. 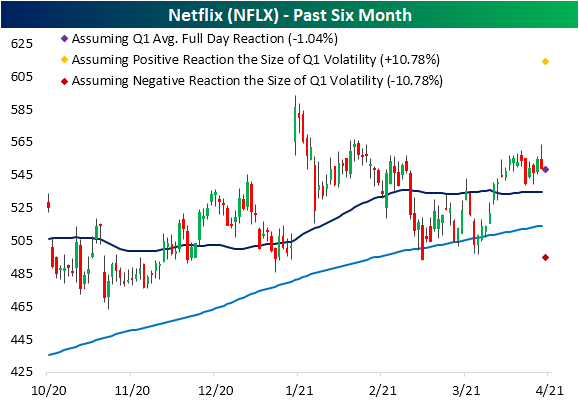