Last month, we highlighted how Nektar Therapeutics (NKTR) has been on a one-way trip lower since its inclusion to the S&P 500 in March 2018. In fact, by the time NKTR officially became a member of the S&P 500, the stock had peaked out at $108.44 only eleven days earlier. Since then, the stock has dropped over 83%.  A bad reaction to the last earnings report in August when the stock fell 29.25% in a single day has only added to the pain, but also caused another issue.  With the market cap being cut by $1.49 billion that day alone—on top of the $11.74 billion loss since the first day as part of the S&P 500—the company no longer met the minimum market cap requirement for the S&P 500 of $4.1 billion. Additionally, the August report also showed four consecutive quarters with negative EPS which violated the S&P 500 requirement of positive earnings for the previous four quarters.  As a result, after the close yesterday, S&P announced that it would be removing NKTR from the S&P 500.  Instead, it will move to the S&P 400 Mid-Cap Index with casino company Las Vegas Sands (LVS) taking its place in the S&P 500.  Ironically, after falling over 80% from its high, NKTR is trading up 3.13% today in the wake of the news.  Perhaps, the S&P 500 and NKTR was a combination that just wasn’t meant to be. Start a two-week free trial to Bespoke Institutional to access our interactive economic indicators monitor and much more. 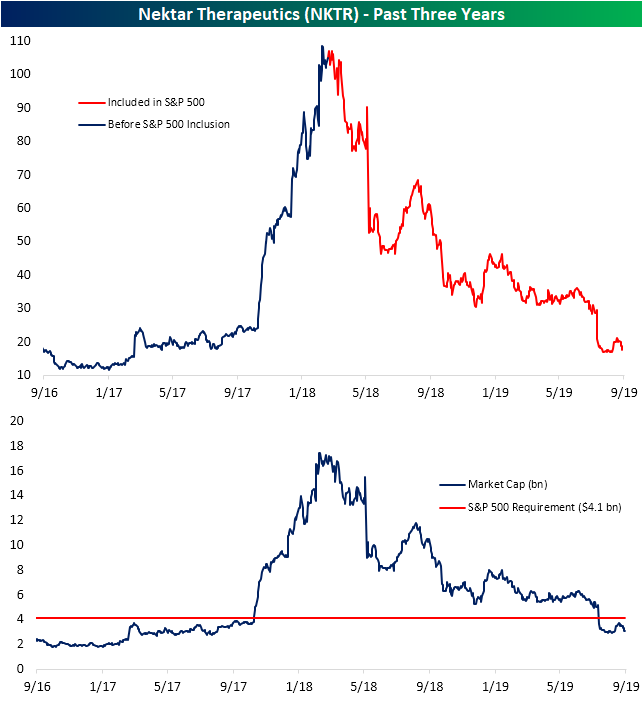