Near Record Consistency for the US Dollar in April

The US dollar performed incredibly strong in the month of April, gaining a total of 4.7%. In addition, there were only three trading days in which the US Dollar Index traded lower, which constitutes a monthly positivity rate of 86%. Notably, this is the third-highest positivity rate on record (since 1971), falling short of just July 1975 and May of 2012. In this week’s Bespoke Report, we conducted a deep dive into the dollar’s recent strength. You can access this report by becoming a paid subscriber today. Click here to view Bespoke’s premium membership options. 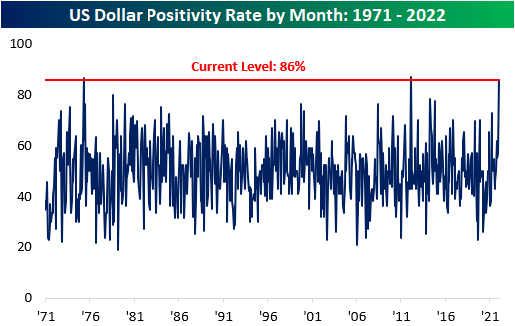 The month where the Dollar Index experienced the highest consistency of positive returns was in May 2012 when it finished higher on just under 87% of the month’s trading days.  During that month, the Dollar Index recovered after falling 175 basis points between the end of 2011 and the start of May. In May alone, it rallied 542 basis points, more than erasing the YTD losses heading into the month. Economic weakness in Europe and concerns over Greece being able to make its debt payments also caused a rotation into dollar-denominated assets.

In July of 1975, the Dollar Index traded higher on 86.4% of the month’s trading days.  Back then, the US was emerging from a recession as the economy was beginning to show signs of strength. Inflation was running hot, which caused short-term interest rates to rise and attracted foreign investors, thus boosting demand for the dollar.

In November of 1978, the daily positivity rates for the US Dollar Index hit 80%. The dollar had experienced weakness leading up to November, shedding 13.9% of its value on a YTD basis. Rates continued to tick higher amidst a high inflationary environment.

As mentioned in our Conference Call Recaps, strength in the US dollar acts as a headwind to Corporate America, as constant selling prices in foreign countries leads to less favorable currency conversions. So, how have equity markets performed during and after strong months for the dollar?  In May 2012, the S&P 500 lost 6.3% but gained 4.0% in the following month. Three and six months out, the index was up 7.3% and 8.1%, respectively. In July 1975, the S&P 500 traded down by 6.8% and proceeded to lose another 2.1% in the following month. Three months out, the S&P 500 was up just 33 basis points. However, six months out, the index had gained 13.6%. Lastly, in November 1978, the S&P 500 gained just 1.7% after trading down by 9.2% in the previous month. In the following month, the index gained 1.5%. Three and six months later, the index was up 1.7% and 4.6%, respectively. For the sake of comparison, in April of this year, the S&P 500 shed 8.8% of its value, so weakness in equities during months where the Dollar Index has been very consistent to the upside is not necessariliy out of the ordinary.