Since Friday’s close, US natural gas future prices have declined 16.4% as of 11:00 AM on Tuesday, but there have been price discrepancies across the globe. We discussed these differences between natural gas prices in the US versus Europe in today’s Morning Lineup. In the US, natural gas prices have not seen a two-day decline in excess of 15% since 12/31/18 and going back to 2000, two-day pullbacks of this magnitude have only occurred 12 other times, four of which occurred within a month and a half time period (12/13/2000 – 1/30/2001). Heading into the current decline, the speculator net position was in a normal range, so dramatically offsides positioning from futures traders is likely not the driving factor behind this move. For more information on that positioning data, check out Monday’s Closer. 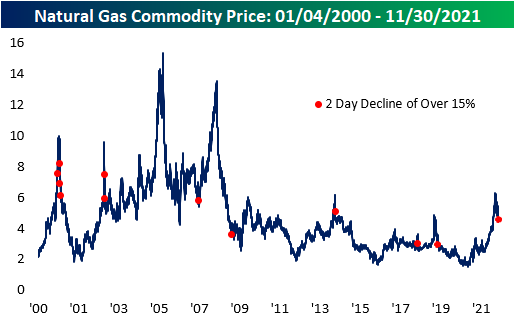 Looking ahead, forward returns of natural gas after a two-day pullback of more than 15% (without another occurrence in the prior three months) tend to be negative (which can be seen as a positive for consumers as it translates to lower energy costs).  The day after the six prior periods shown, the average next-day performance for natural gas was a decline of 0.7% (median: -2.9%).  Over the next week, the average decline was just 0.4% but the median decline was much greater at 6.1%.  Looking out over the next one and three months, performance continued to weaken with average declines of 8.8% (median: 9.2%) and 4.9% (median: -8.7%), respectively.  Downside momentum in natural gas was also pretty consistent across as natural gas was only positive across all the time windows shown one-third of the time. Click here to view Bespoke’s premium membership options. 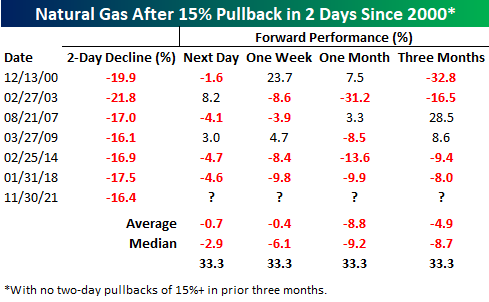