Energy commodities have been on an impressive run in 2021. Natural gas has basically gone into orbit recently on supply concerns. The US Natural Gas Fund (UNG) is now up over 100% on the year and 15.65% over the past five days alone. Since its recent closing low on August 18th when UNG was testing its 50-DMA, UNG has rallied 44.88%. Take a look at the one-year price chart for UNG: 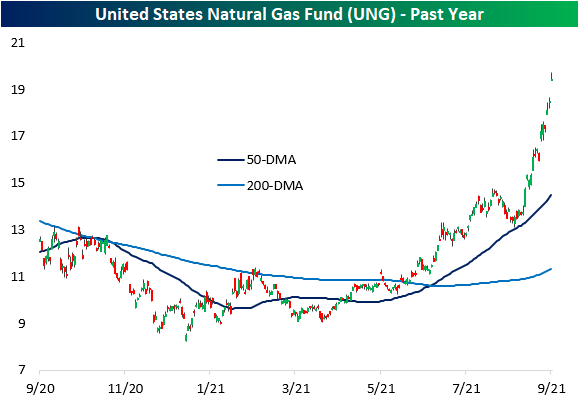 With regards to this particular ETF tracking the commodity, UNG’s one month rate of change is now approaching one of the highest levels on record.  As shown in the chart below, UNG’s 40.9% rally over the past month is second only to the 43.6% gain in August of last year and a 46.3% rally in November 2018.  As for a slower year-over-year rate of change, things are equally as impressive.  Again, only two periods have seen UNG experience larger gains on a rolling 1 year basis. The smaller and more recent of the two was when UNG posted a 66% rally in early December 2018 while the record 68% rally occurred in April 2013. 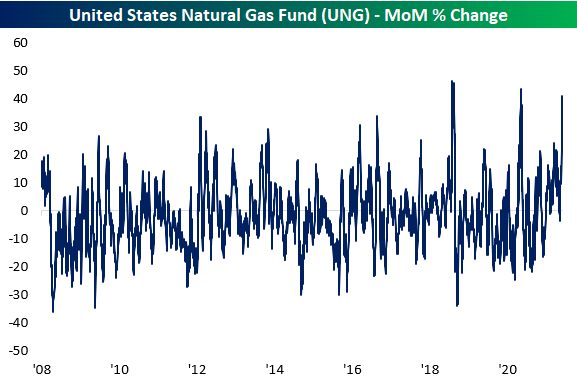 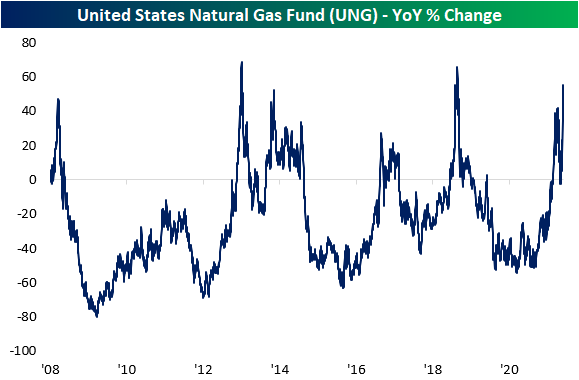 As could be expected with the explosive moves in natural gas prices, price has become extremely overbought.  Today, UNG has moved over 3 standard deviations above its 50-DMA for the first time since June.  Prior to that occurrence earlier this spring, there were only a handful of other times that UNG was as elevated above its 50-DMA. Two of those were in the fall of 2018 while the others were in June 2016, January 2014, and June 2010. 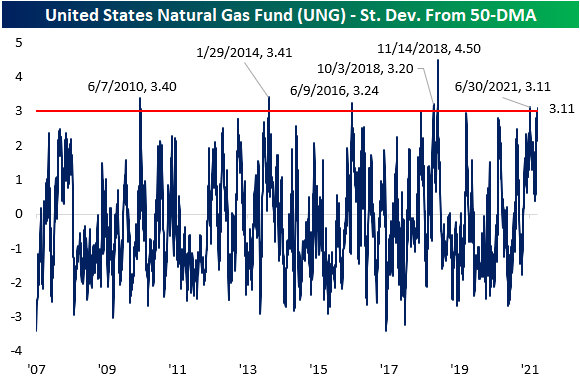 Turning to a look at speculator positioning, Friday’s release of the CFTC’s Commitment of Traders report showed the recent rally in natural gas appears to have resulted in shorts closing out their positions.  As shown below, open interest has consistently been net short since the early spring. But from the second to last week of August to the most recent update last week, the percent of open interest has gone from 11.97% net short to only 8.18% net short.  March 2020 was the last time to have seen positioning jump by as much in a two-week span.  Click here to view Bespoke’s premium membership options. 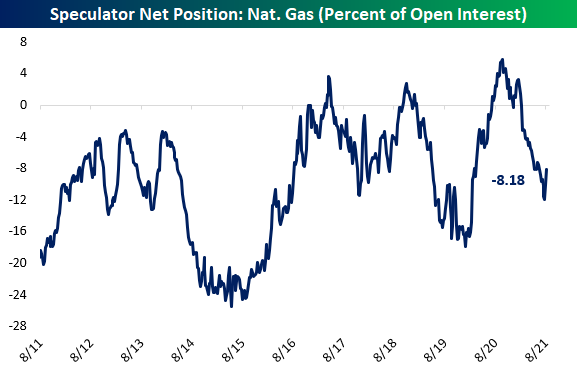