With Technology rallying and once again outperforming to start the new trading week, we wanted to note that the sector’s weighting in the S&P 500 has pushed above 27% recently up to 27.2%.  That’s nearly twice as big as the next biggest sector in the S&P — Health Care — at 14.5%.  Just three other sectors have weightings above 10%, and they’re all just only slightly above the 10% mark — Communication Services, Consumer Discretionary, and Financials.  We’d note that Amazon (AMZN) makes up about a quarter of the Consumer Discretionary sector’s 10.8% weighting in the S&P, and while it is technically a retailer, between its web services division, and strong technology platform, you could argue that its just as much a Technology stock as it is Consumer Discretionary.

Industrials and Consumer Staples have seen their weightings dip below 8%, and the four smallest sectors each have weightings of just 2-3%.

At the moment, Tech’s 27.2% weighting in the S&P is larger than the weightings of the six smallest sectors combined. 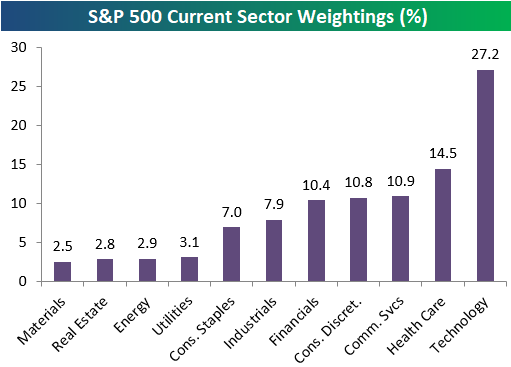 The tech-oriented Nasdaq 100 continues to outperform as well.  Below is a chart of the ratio between the index levels of the Nasdaq 100 vs. the S&P 500.  The ratio has been on a non-stop march higher since the end of the Dot Com bust in late 2002.

There have only been three trading days in history where the Nasdaq 100 to S&P 500 ratio was higher than the 3.25 level it’s at right now.  Those three days came on March 8th, March 9th, and March 10th of the year 2000 — the very peak of the Dot Com Bubble. 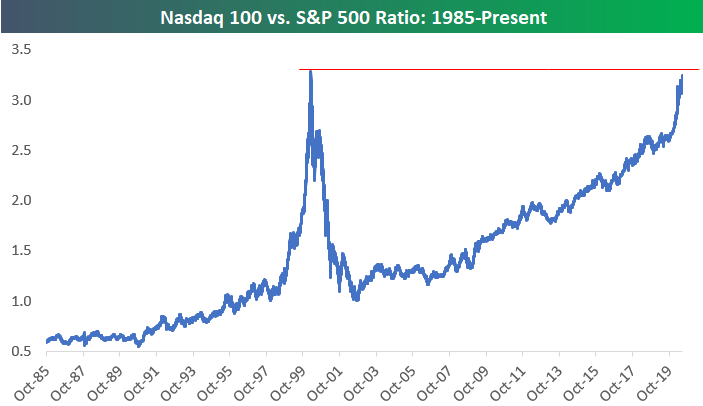 Finally, the Growth vs. Value trade remains lopsided towards growth.  Below is a chart of the ratio between the S&P 500 Growth and S&P 500 Value index since 1995.  This ratio actually took out its highs from the Dot Com Bubble in mid-2019, and it has exploded even higher over the last year.  Value did outperform for a bit in May and early June, but over the last two weeks we’ve seen Growth soar and the ratio has once again made new highs.  Click here to view Bespoke’s premium membership options for full access to all of our research. 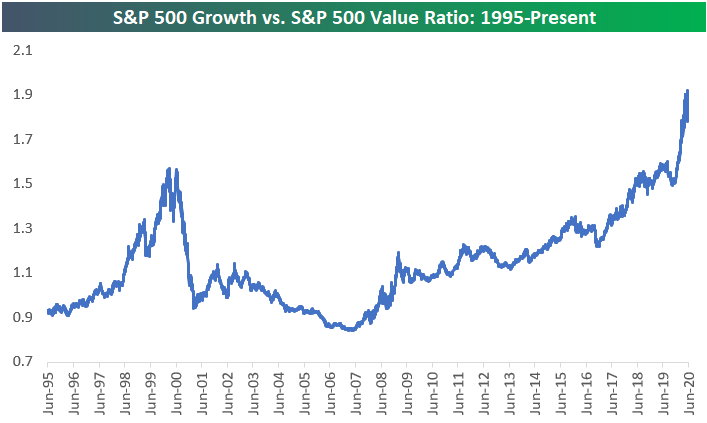