The Nasdaq has been outperforming every other US-based equity index over the last year, and nowhere has the disparity been wider than with small caps.  The chart below compares the performance of the Nasdaq and Russell 2000 over the last 12 months.  While the performance disparity is wide now, through last summer, the two indices were tracking each other nearly step for step.  Then last fall, the Nasdaq started to steadily pull ahead before really separating itself in the bounce off the March lows. Just to illustrate how wide the gap between the two indices has become, over the last six months, the Nasdaq is up 11.9% compared to a decline of 15.8% for the Russell 2000.  That’s wide! 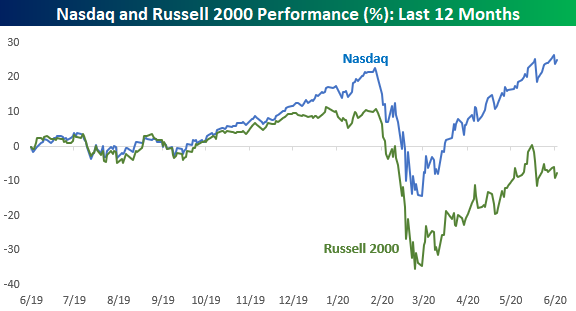 To illustrate the magnitude of the Nasdaq’s outperformance over the Russell 2000 from late 1998 through early 2000, the chart below shows the performance of the two indices beginning in October 1998.  From that point right on through March of 2000 when the Nasdaq peaked, the Nasdaq rallied more than 200% compared to the Russell 2000 which was up a relatively meager 64%. In any other environment, a 64% gain in less than a year and a half would be excellent, but when it was under the shadow of the surging Nasdaq, it seemed like a pittance. Like what you see? Click here to view Bespoke’s premium membership options for our best research available. 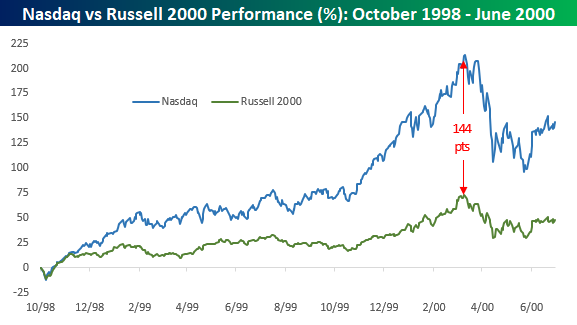