Historically, the first three trading days of the year have been positive for the NASDAQ with gains more than two-thirds of the time (68.6%). This year has been a different story, though, as the Nasdaq fell 3.4% in the first three days; the fifth-worst 3-day start to a year in the NASDAQ’s history. The only years with a weaker 3-day start were 2000, 2005, 2008, and 2016. 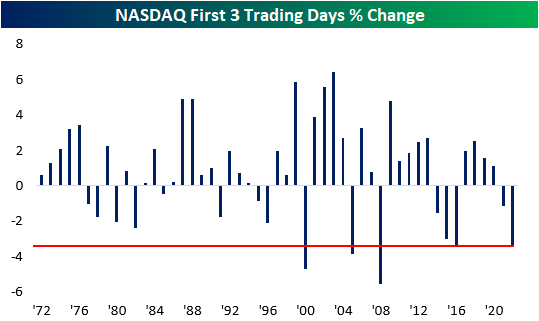 The table below lists the five prior years where the NASDAQ started the year with a decline of 3% or more in the first three trading days.  For each year, we also show the index’s performance for the remainder of January as well as the remainder of the year.  In the case of these five years, first impressions have been a pretty good indicator of future performance as the NASDAQ’s performance for the remainder of January and the rest of the year was weaker than average.  While the range of returns is extremely wide, the average return for the rest of January was a decline of 1.6% (median -1.4%), and the rest of the year averaged a decline of 9.5% (median +5.5%).  We’d also note that the two worst three-day starts to a year for the NASDAQ (2000 and 2008) also experienced the two worst rest of year returns for the Nasdaq in its history. 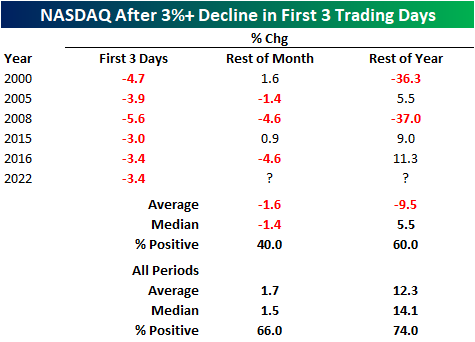 Although the fact that two of the worst years in the NASDAQ’s history were also years where the index dropped more than 3% in the first three trading days of the year, by itself, investors should not take this year’s occurrence as an overly bearish sign.  Throughout the index’s history, there has been very little correlation between how it traded in the first three trading days and its rest of year return, and the r-squared between the two is just 0.0132. 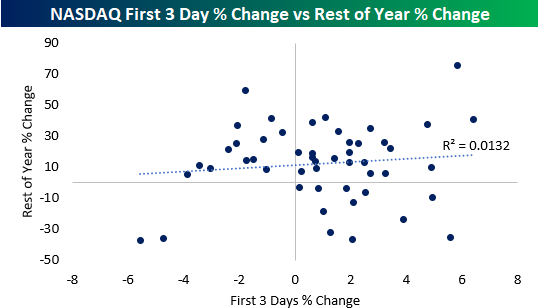