It’s hard to believe that sentiment can change so fast in the market that one day investors and traders are bidding up stocks to record highs, but then the next day sell them so much that it takes the market down over 2%.  That’s exactly what happened not only in the last two days but also two weeks ago.  While the 5% pullback from a record high back on June 10th took the Nasdaq back below its February high, this time around, the Nasdaq has been able to hold above those February highs. 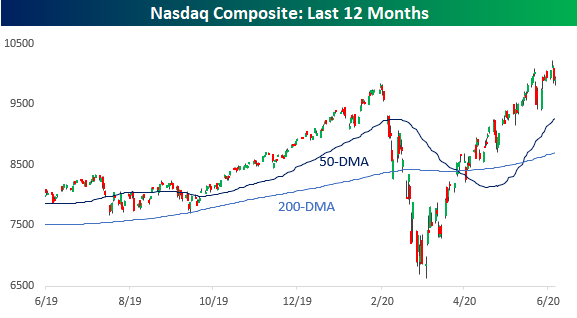 In the entire history of the Nasdaq, there have only been 12 periods prior to this week where the Nasdaq closed at an all-time high on one day but dropped more than 2% the next day.  Those occurrences are highlighted in the table below along with the index’s performance over the following week, month, three months, six months, and one year.  We have also highlighted each occurrence that followed a prior one by less than three months in gray.  What immediately stands out in the table is how much gray shading there is.  In other words, these types of events tend to happen in bunches, and if you count the original occurrence in each of the bunches, the only two occurrences that didn’t come within three months of another occurrence (either before or after) were July 1986 and May 2017.

In terms of market performance following prior occurrences, the Nasdaq’s average and median returns were generally below average, but there is a pretty big caveat.  While the average one-year performance was a gain of 1.0% and a decline of 23.6% on a median basis, the six occurrences that came between December 1999 and March 2000 all essentially cover the same period (which was very bad) and skew the results.  Likewise, the three occurrences in the two-month stretch from late November 1998 through January 1999 where the Nasdaq saw strong gains also involves a degree of double-counting.  As a result of these performances at either end of the extreme, it’s hard to draw any trends from the prior occurrences except to say that they are typically followed by big moves in either direction.  The only time the Nasdaq wasn’t either 20% higher or lower one year later was in 1986. Like What you see? Click here to view Bespoke’s premium membership options for our best research available. 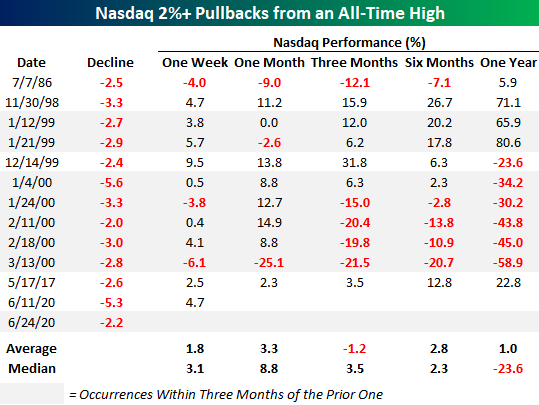