Not surprisingly, September hasn’t been a bull-friendly month for the Nasdaq 100.  After a sharp decline from its record highs earlier this month, the index has made a series of lower highs and lows ever since.  On 9/11, the Nasdaq 100 closed below its 50-DMA for the first time in several months, and while it quickly recovered above that level the following Monday, the bounce didn’t last for long.  This Monday, the Nasdaq 100 kicked off the week with another lower low, and while it recovered from those lows, the bounce-back ran out of steam just shy of its 50-DMA.  As far as technical patterns go, it’s never positive to see an index attempt to bounce back after breaking an uptrend only to see that rally run out of steam just shy of a key moving average.  That’s the pattern shaping up for the Nasdaq now, though, and until the string of short-term lower highs and lower lows breaks, the burden of proof remains on the bulls.

For the broader market as a whole, the percentage of stocks trading above their 50-DMA has also started to dwindle.  The chart below is from our Daily Sector Snapshot and shows the percentage of stocks in the S&P 500 finishing each day above their 50-DMA.  Back in the early stages of the rally off the March lows, the percentage surged to just under 100%.  From there, it started to drift lower, but even in early September more than three-quarters of stocks in the index were above their 50-DMAs.  As September has progressed, however, the ranks of stocks above their 50-DMA have been more than cut in half to the current level of 35% – the lowest level in five months.  Nothing goes up in a straight line, and pullbacks are part of the process, but September sure has been rough for many investors, who after the last few months may have forgotten that stocks do in fact move in two directions.  Click here to view Bespoke’s premium membership options for our best research available. 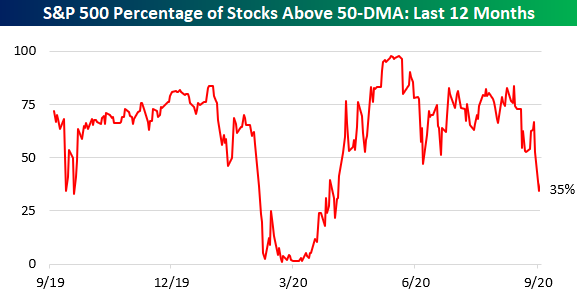