Nasdaq 100 Down Over 1% In Six of Eight Sessions

With volatility becoming an aspect of daily life for investors, the Nasdaq 100 has traded down by over one percent in six of the eight last sessions, resulting in a total drawdown of 8.4% during that span.  Although the index is in the green for today (at least for now), the pattern of continuous selling is notable. The last time there were six 1%+ declines in the span of eight trading days (with no other occurrences in the last month) was on January 25th of this year. As you can see from the chart below, a large percentage of the prior occurrences since the index was launched (1985) are clustered between the years 2000 and 2002 (8 occurrences). Overall, these events tend to occur during periods of drawdowns (2000 to 2002 was a long drawdown) but occasionally mark a bottom as the sellers become washed out. 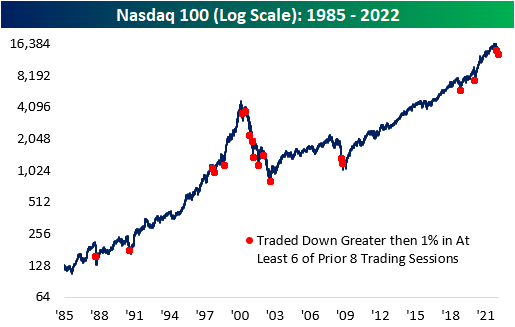 Forward performance following these occurrences is generally mixed, but the period of time with the largest cluster of occurrences (2000 – 2002) also experienced consistent continued weakness.  Overall, forward returns were greater than that of all periods for almost every period we looked at (apart from three months),.  However, positivity rates are lower across the board compared to normal trading environments, apart from the next week. In 72.2% of occurrences, the market turned higher the following week, resulting in a median return that is eight times higher than the median of all periods. 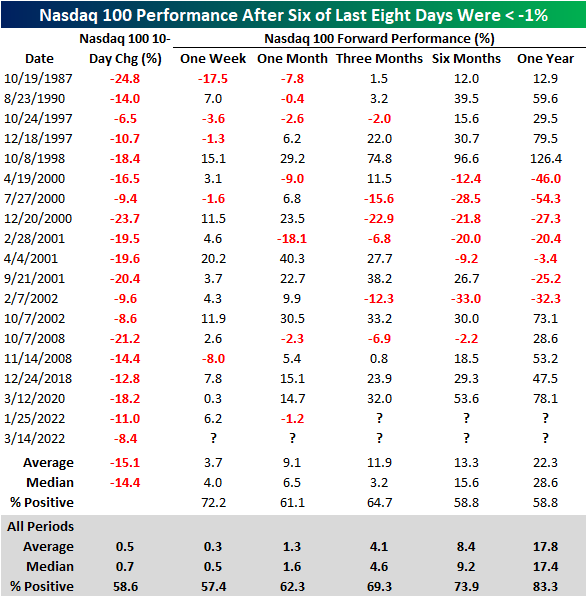 As you can see from the chart below, we have experienced far worse 8-day drawdowns than the current period, but it is worth noting that this 8-day drawdown is in the 98th percentile of all periods since 1985.Click here to try out Bespoke’s premium research service. 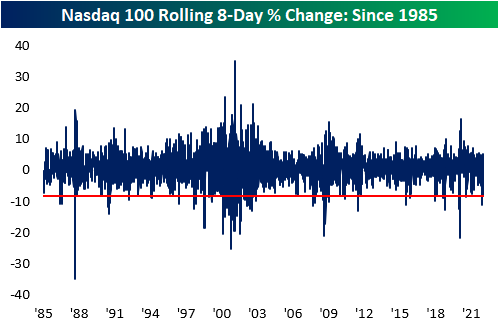 Past performance is no guarantee of future results.