Nasadaq – One Downtrend Down, Another To Go

In a post yesterday, we discussed the seemingly never-ending rangebound trading pattern for the STOXX 600.  It’s not just Europe either.  Seemingly everywhere you look these days, there’s a major equity index stuck in some sort of range.  The Nasdaq is just one example of many.  At a level of around 8,140, the Nasdaq is at the same level it was at exactly six months ago and also all the way back in August of last year.

Last week at this time, things were looking good for the Nasdaq as the index had bounced off of support at its 200-DMA and broke its short-term downtrend from the September lower high.  This week has seen further gains with the Nasdaq rising more than 1%, but that rally looks to have stalled out yesterday right at another downtrend from the July high.  A meaningful break of that downtrend would come into play at around 8,200 which is just over half of one percent above current levels. Using our Trend Analyzer tool, of the 100 stocks in the Nasdaq 100, heading into today, 43 were overbought and just five were oversold, so it may take a few days of ‘rest’ for the index before a meaningful break of that downtrend can occur.  Start a two-week free trial to Bespoke Institutional to unlock access to all of our interactive tools. 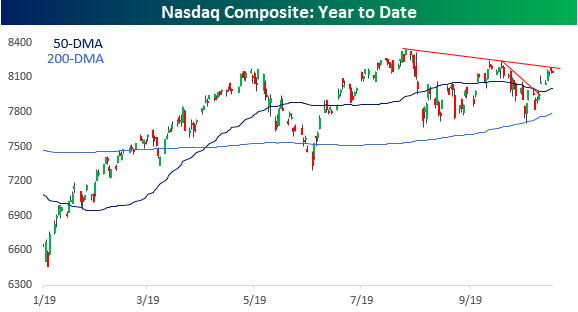