This morning, the New York Fed’s Empire State Manufacturing Survey showed the strongest reading since May of last year.  The headline index surged 8.1 points from 4.8 in January to 12.9 in February.  That was the biggest pickup in activity since July when the general business index rose 10.6 points following a massive 20.8 point decline in June.

Taking a look across the individual categories of the survey, there were multiple significant moves to multiyear highs as current conditions have broadly picked up across categories.  The only area that saw some weakness in February was that of employment as the indices for Number of Employees and Average Workweek both fell. The index for Average Workweek was the only index to show more businesses reporting worsening conditions in February. That compares to January in which Delivery Time, Inventories, and Prices Paid all showed conditions worsening.

Forward-looking results did not share the same strength as the indices for current conditions. The index for Number of Employees was the only expectations index that rose from January. In other words, current conditions have improved much more dramatically than optimism for the future. That’s similar to a trend that we’ve been seeing in the Conference Board’s Consumer Confidence Index for quite some time now. 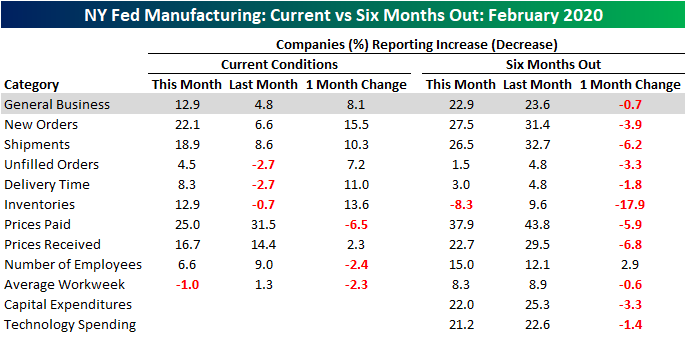 One of the more notable indices in February’s report was that of New Orders.  The index rose 15.5 points to 22.1 which is the highest level since September 2017 when it was 23.7.  That 15.5 increase was also the biggest one month jump since June of 2017 when it rose 18.3 points. Although the current outlook has dramatically improved, expectations for New Orders remain around similar levels to the past couple of years. 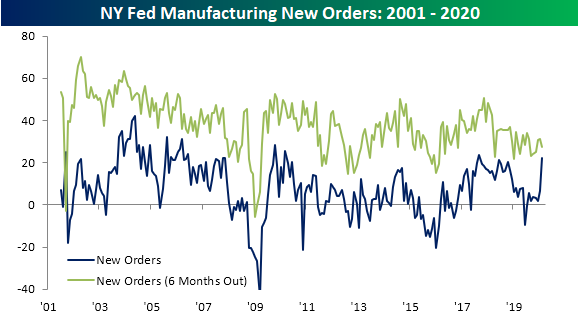 As New Orders surged, more NY businesses reported rising unfilled orders.  This index came in with its first positive reading (4.5) since May of last year, reaching the highest level since September of 2018. Part of this increase is likely due to longer delivery times (more on this later). 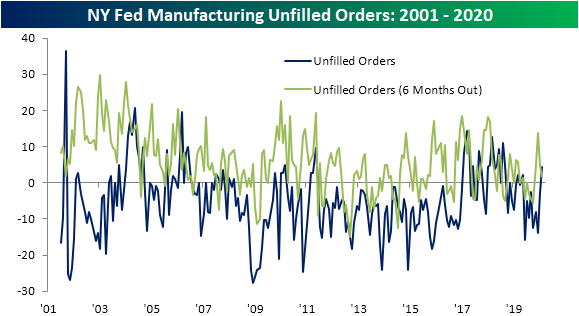 Given the rise in New Orders and as businesses struggle to fulfill existing orders, Shipments have also picked up, rising 10.3 points to 18.9.  That was the largest increase in this index since March of 2018, leaving it at its highest level since November of that same year. But as with other indices, the move in future conditions was much more subdued declining 6.2 points. Regardless, the combined move in Shipments, Unfilled, and New Orders indicate strong demand among New York state manufacturers.

Despite this pickup, Inventories have continued to build with longer delivery times.  In fact, the index for Inventories rose from a negative reading last month to 12.9 in February. It has only been higher in two other months since 2001: once in September of 2001 with an outlier reading of 40 and again in January of 2018 when it reached 13.8.  At the same time, expectations for 6 months out plummeted to -8.3 which is the lowest reading since November of 2016.  Meanwhile, Delivery Times surged 11 points to 8.3 which was the biggest one month jump in the index since June of 2010 and the highest level of that index since August of 2018.  As with the index for Inventories, businesses do not appear to expect Delivery times to continue to grow as significantly over the next half year.  Overall, this month’s survey seemed to show that while demand may not be an issue, New York manufacturers’ ability to get products out the door has hit a little bit of a roadblock. Start a two-week free trial to Bespoke Institutional to access our interactive economic indicators monitor and much more. 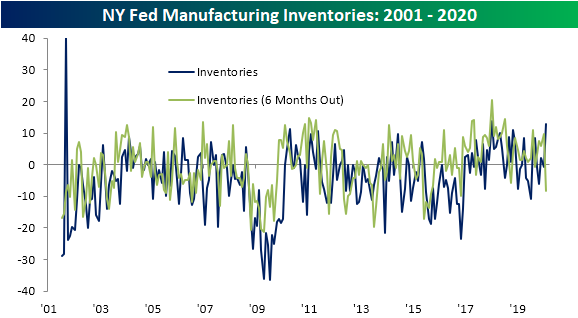