Microsoft (MSFT) Closes in on Apple (AAPL) as World’s Largest

With a gain of more than 4% today in reaction to earnings, Microsoft (MSFT) is suddenly challenging Apple (AAPL) for the title of world’s largest company.  Coming into today, Apple had a market cap of $2.468 trillion versus Microsoft’s market cap of $2.328 trillion.  That spread of $140 billion has shrunk all the way down to just $27 billion after Microsoft’s gain of $117 billion in market cap today alone. 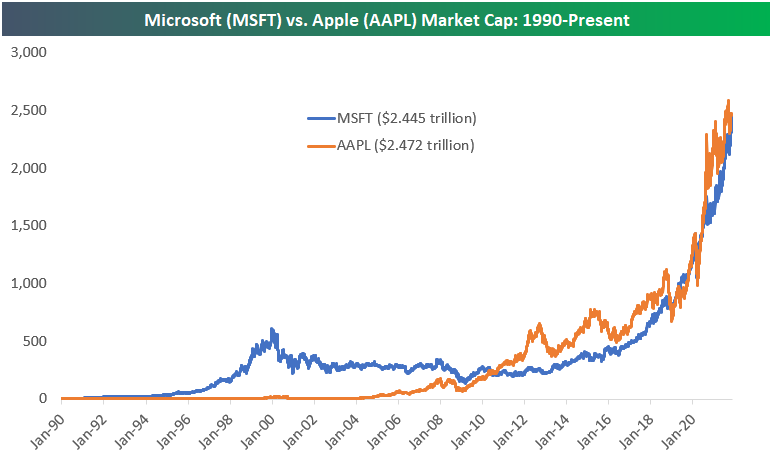 As shown below, Microsoft (MSFT) had a market cap of $615 billion versus Apple’s (AAPL) market cap of just $15.9 billion back in late December 1999 near the peak of the Dot Com Bubble.  From there, Apple began to gain ground with its iPod and iPhone releases in the early and mid-aughts.  On May 26th, 2010, Apple’s market cap finally crossed above that of Microsoft and didn’t look back for quite some time.  Remember, before shifting focus on the cloud, Microsoft’s business was struggling mightily.  The company’s market cap essentially went sideways for 15 years before exploding higher again in the second half of the 2010s as Office 365 took hold.

While MSFT was actually bigger than AAPL at various points between 2018 and 2020, Apple’s widest market cap margin versus Microsoft actually came in January of this year when Apple was at $2.4 trillion versus MSFT at $1.74 trillion.  Since that peak on January 25th, though, MSFT has been rapidly gaining ground.  It will only take another small move higher on a relative basis for MSFT to eclipse AAPL’s market cap at this point.  AAPL reports earnings on Thursday, so how the stock responds to that report will have a big impact on how this relationship stands heading into the month of November. Click here to view Bespoke’s premium membership options. 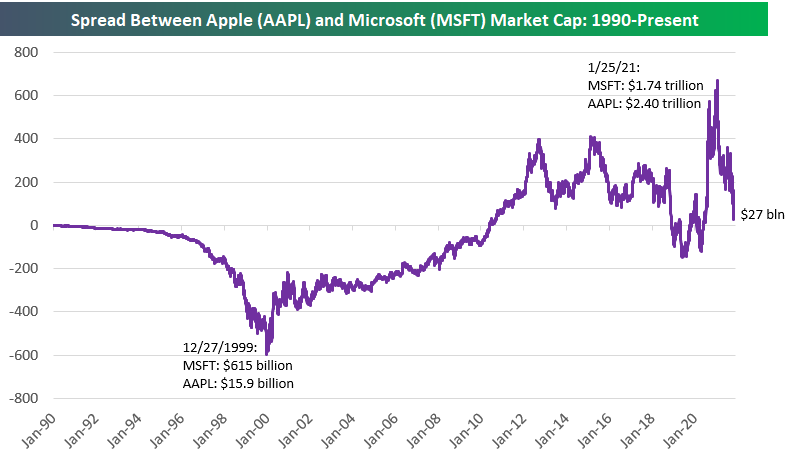