Most Volatile Stocks on Earnings

As earnings season lurks around the corner, we took a look into the most volatile stocks on earnings that are reporting between now and the end of November, as we do ahead of each earnings season. These stocks have historically experienced the largest one-day moves in reaction to their earnings reports.

The number of daily earnings reports ramps up next week but doesn’t hit full-stride until two weeks from now, which is the end of October.  Earnings season continues into the start of November as well.  (You can track upcoming earnings reports and monitor earnings-related trends using our Earnings Explorer tool.) 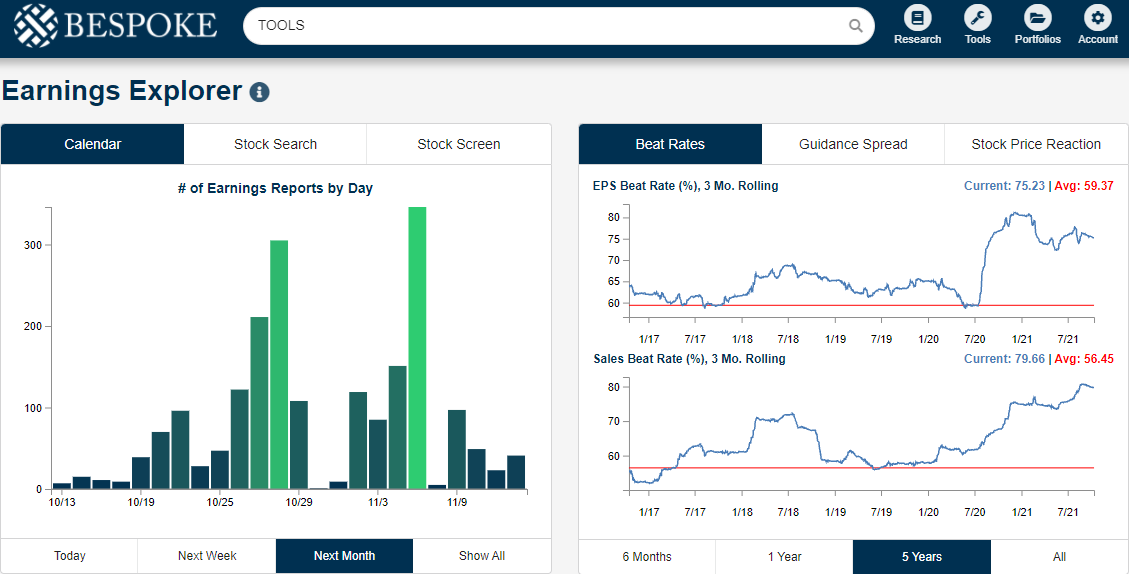 In the table below you will find the stocks that have historically seen the biggest share-price reactions to earnings that have at least 8 quarters (2 years) of earnings reports. On the trading day following their respective earnings reports, these companies have had the highest average absolute percentage change in share price. (For stocks that report before the open, we are looking at its one-day change on that trading day.  For stocks that report after the close, we are looking at its one-day change on the next trading day.) 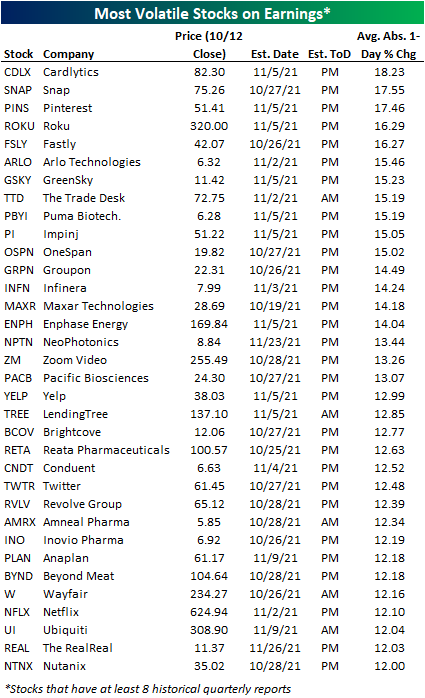 To show you the volatility of these names, let’s take a look at the earnings results for the top name of this list, CDLX.  Below, you will see that the stock has typically seen dramatic moves on its earnings reaction days.  Specifically, the stock has experienced the largest drawdowns when it has lowered guidance. The maximum one-day earnings drawdown since CDLX’s IPO was 36.7%.  Conversely, its maximum upside was a gain of 42.9% back in November 2019.  CDLX is heading into its upcoming earnings report on a two-quarter losing streak.  On its earnings reaction day in May, CDLX fell 16.96%, while it fell 27.61% on its last earnings report in August. 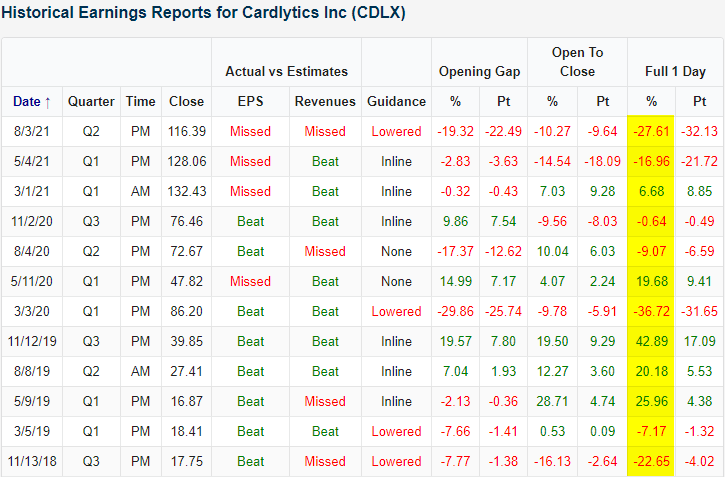 The table below examines the most volatile stocks on earnings that have at least five years (20 reports) of quarterly reports.  Over time, stocks tend to decrease in volatility around earnings because of the increase in available data points.

Of the stocks with at least five years of quarterly earnings data that are reporting between now and the end of November, The Trade Desk (TTD) has been the most volatile with average absolute one-day price movements of +/-15.19%. Impinj (PI) has averaged a move of over +/-15% as well.  Groupon (GRPN), Infinera (INFN), and Enphase Energy (ENPH) follow with average price moves of over +/-14%. Other notable members of this list include Wayfair (W), iRobot (IRBT), Chegg (CHGG), and Crocs (CROX). 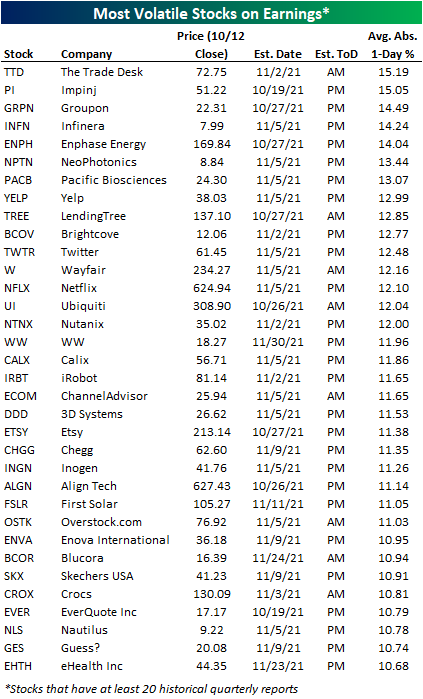 The top name on the list above, TTD, has had interesting earnings reactions and is far from predictable. Over the last 8 earnings periods, the company has beaten on EPS and revenues every single time, and it has only failed to raise guidance once.  However, the stock dropped 26% after beating both EPS and sales and raising guidance back in May.  The market seems to set its own expectations apart from the street for this name.

On the final list, we will only be looking at names that have at least 10 years (40 quarterly reports) of earnings history.  Although these are well established companies, they still experience absolute average price moves of +/-10% on earnings reaction days.

While all of the stocks listed on these tables have historically seen violent moves in reaction to earnings, there is of course no way to know whether the large moves will be to the upside or downside, so tread lightly! 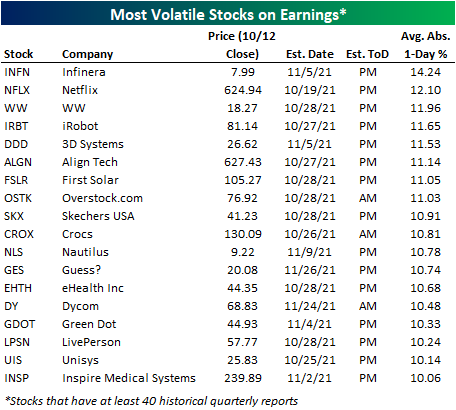 The volatility leader of the above list, INFN, has experienced a lower level of volatility after its four most recent reports in comparison to historical averages.  During the last four periods, INFN has averaged an absolute average one-day change of just under 4%. This is significantly below its overall average of +/-14.24% on its 56 historical reports dating back to 2007.  Since the start of historical data, the stock has only booked four straight absolute one-day price changes of under 10% one other time, which occurred in the last three quarters of 2012 and the first quarter of 2013. 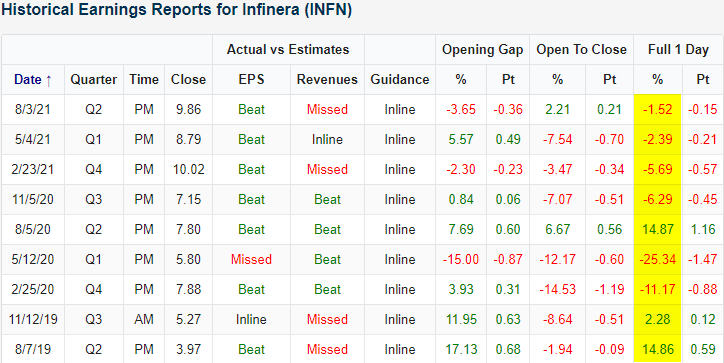