Most Shorted Stocks Underperform But Not Without Exceptions

GameStop (GME) is in the news again today and rallying over 6% with the announcement that the company’s CEO, George Sherman, will be stepping down and that ‘roaring kitty’ has increased his stake.  Earlier this year, the stock was the most heavily shorted stock in the Russel 3,000 with well over 100% of the float sold short. Today, ‘only’ 19.5% of shares are sold short. Although GME is seeing a decent-sized move higher, breaking the Russell 3000 into deciles based on short interest shows the stock is more of an outlier in terms of the relationship between performance and short interest.  As shown below, the first decile comprised of the least shorted stocks in the index is outperforming averaging a decline of 60 bps while the tenth decile (which includes GME) of the most heavily shorted stocks is down the most at 2.08%.  Alongside the ninth decile, these two groups of the most heavily shorted names are down an average of more than 2%.

Additionally, stocks belonging to the top three deciles of the least shorted stocks all have a higher percentage of stocks trading higher on the day, but that relationship is less consistent for the other deciles.  As shown in the second chart, the decile of the most shorted stocks actually has a more middling reading of 18.09% while the sixth decile has the lowest percentage of stocks higher today. 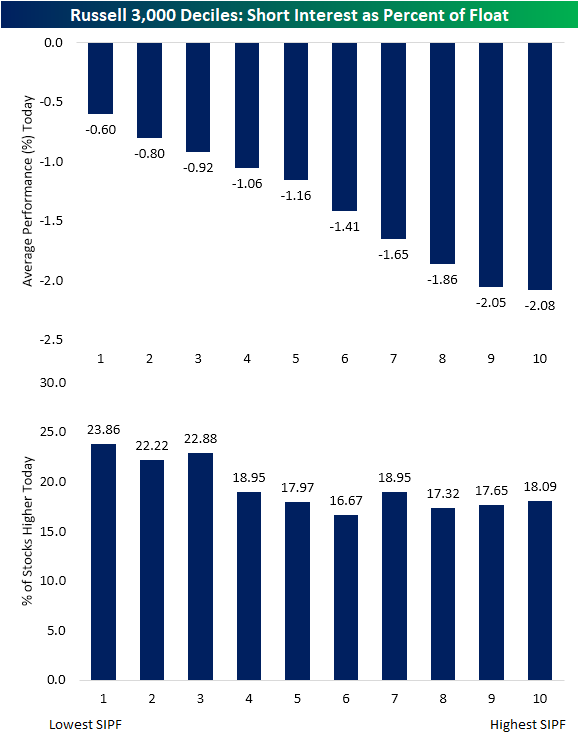 In other words, there is a wider range of performance of more heavily shorted stocks than the stocks that are less heavily bet against. The chart below shows these same deciles and the standard deviations of the groups’ performance today.  The fifth decile has the largest range of performance today as a result of the two single biggest movers of the index both belonging to this decile. Those are Marlin Business Services (MRLN) and Haemonetics (HAE) which are up 48.95% and down 33.71%, respectively. Without those names, the reading is less extreme at 1.68.  Again controlling for those names, the most shorted stocks would have the highest standard deviation of returns at 2.73. 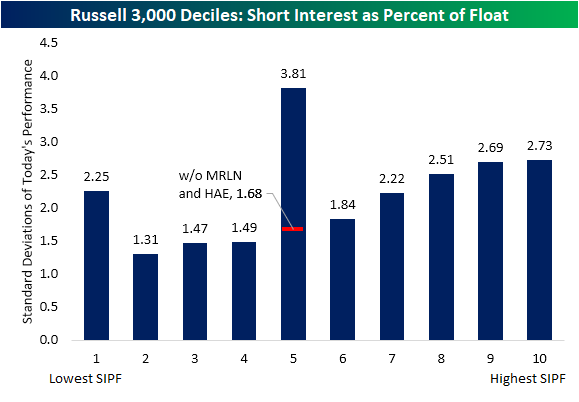 To show this further, in the table below we show the 15 biggest gainers and decliners in today’s session. As previously mentioned, the biggest gainer is Marlin (MRLN) which is rallying almost 50% on news that it will be taken private.  Meanwhile, Haemonetics (HAE) has been cut down by a third after a supply agreement was not renewed.  Both of these stocks belong to the fifth decile in terms of short interest.  As for the other biggest movers, many that belong to the top couple of deciles can be found on both sides of the ledger.  So again, although the most heavily shorted stocks are on average the biggest decliners today and vice versa, there are a number of exceptions. Click here to view Bespoke’s premium membership options for our best research available. 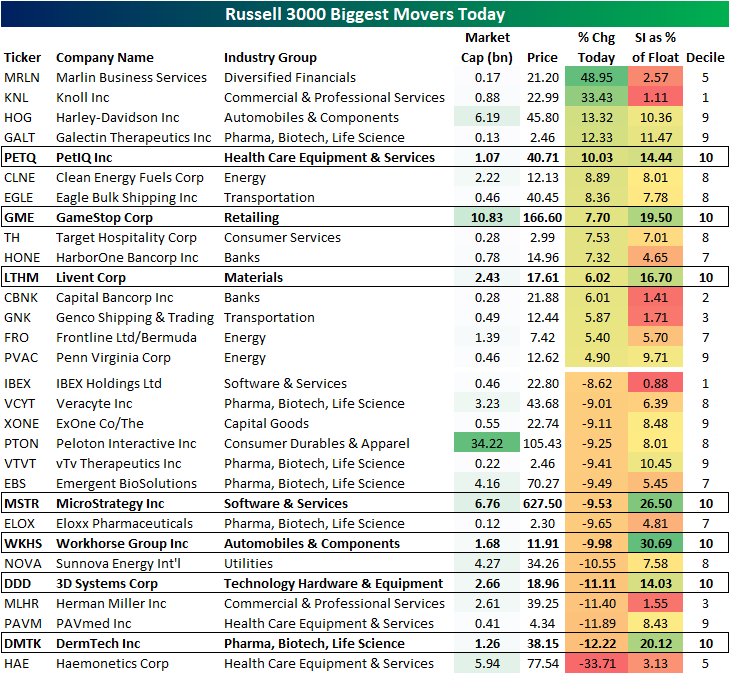