Most Heavily Shorted Stocks at the End of 2020 and Now

In the table below, we show the 20 stocks in the Russell 3000 that currently have the highest short interest as a percentage of float.  It should come as no surprise that GameStop (GME) still tops that list with 122.97% of float short as of the most recent data for mid-month. That is even after a 21.36 percentage point drop from the end of 2020 when 144.34% of shares were short. It was also the most heavily shorted stock then.  The runner-up is Dillard’s (DDS) which currently has 83.04% of shares sold short compared to over 90% at the end of 2020.  Again, despite that sizeable decline in the percentage of shares sold short, it was also the second most heavily shorted stock one month ago. Of the rest of the top 20, there are six other names with lower short interest than the end of last year.  Looking across the rest of the most heavily shorted stocks, Sumo Logic (SUMO), American Well Corp (AMWL), and Sunpower (SPWR) are the stocks that have seen their short interest as a percentage of equity float rise the most.  In terms of stock price performance, SPWR has been the one with the biggest rally having doubled YTD.  The only other stock that has doubled YTD in this cohort has been GME. 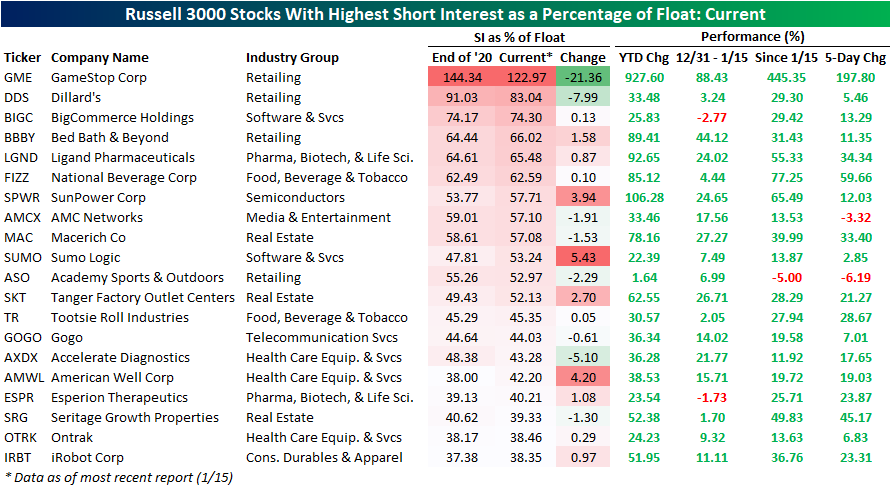 In the table below, we show the stocks that have seen the biggest changes in the percent of shares sold short between the end of 2020 and the most recent data as of January 15th. Those currently in the top 20 most shorted stocks are highlighted in gray. Across the entire Russell 3,000, 1,777 stocks have seen their short interest as a percent of short move lower in the two week period from the end of December to mid-January.  As shown, even after the massive short squeeze that has taken place, GME is actually not the stock that has seen the biggest decline in shorts.  Relay Therapeutics (RLAY) holds that title with a 22.62 percentage point decline.  That is even though the stock has experienced a relatively smaller move than some of its peers. Granted, a number of other stocks like nCino (NCNO) and Berkeley Lights (BPYU) to name a few have actually moved lower so far in 2020 and have also seen their short interest decline significantly. On the other end of the spectrum, WW International (WW) has seen its short interest rise the most. Click here to view Bespoke’s premium membership options for our best research available. 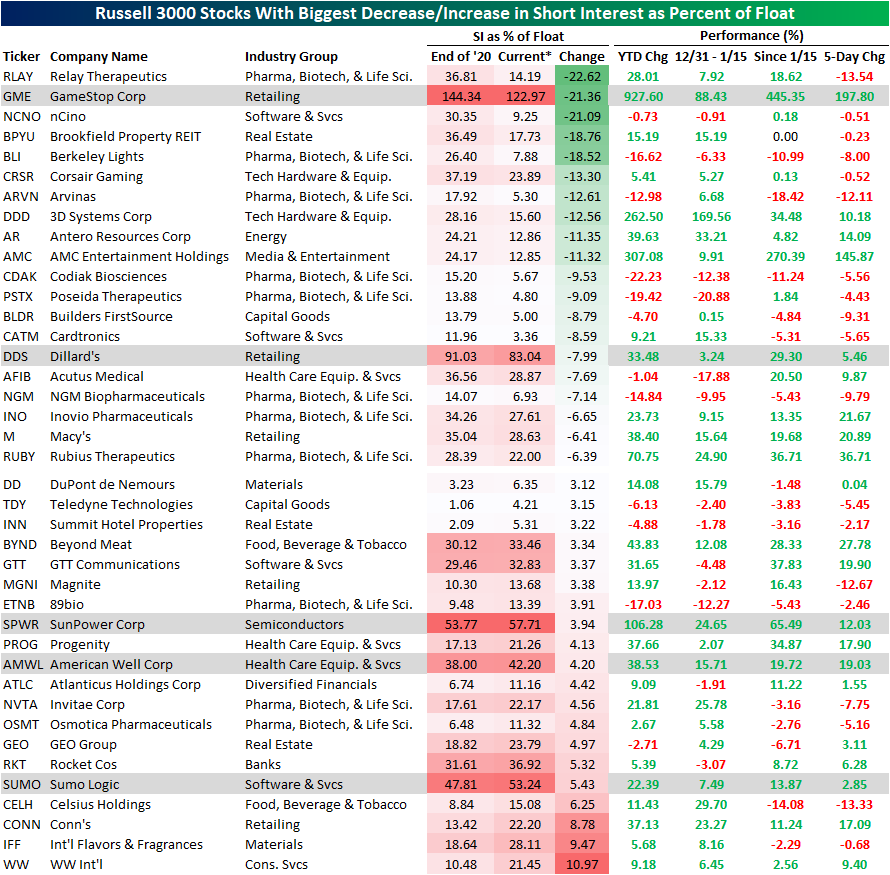