Mortgage Activity Falling Off A Cliff

The economic calendar was light today with the only US releases of note being wholesale trade sales and inventories on top of the regularly scheduled weekly releases for Wednesday. Perhaps the most notable data point was the weekly reading on mortgage applications from the Mortgage Bankers Association. As the national average for a 30 year fixed rate mortgage has resumed its move higher and is once again above 5.5%, mortgage refinance applications continue to fall as fewer homeowners are balking at the highest rates in over a decade. The MBA’s index tracking refinance applications fell for a fifth week in a row. On top of all the other declines over the past year and a half, the index currently sits at the lowest level since December 2000. 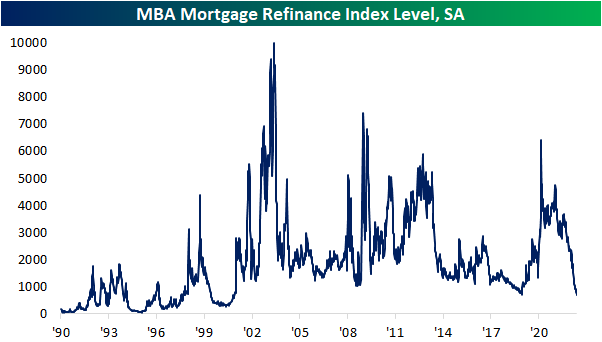 While refinancing activity has completely turned a corner from the historically impressive readings earlier in the pandemic, purchase applications are not as historically depressed, but the picture hasn’t been particularly promising.  Falling another 7.1% week over week, today’s reading is one of the worst levels since the spring of 2020, and excluding those early days of the pandemic, it would be the worst reading since November 2016. 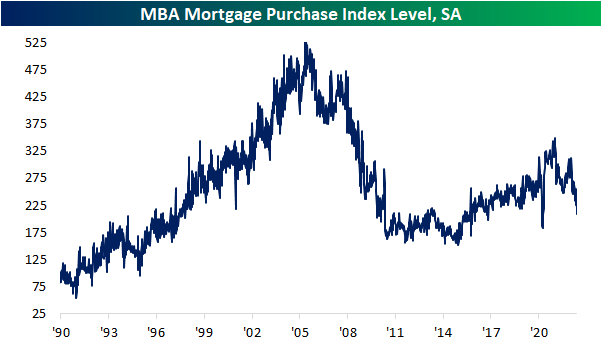 Taking a look at the non-seasonally adjusted number, claims have been running at a healthy level relative to the past decade, albeit below the pace of the past couple of years.  Late spring is typically when applications set an annual peak as was the case this year (blue dots in first chart below).  The high was now exactly one month ago which brings to question how the current decline from the seasonal high stacks up to prior years. As shown in the second chart below, the unadjusted number has fallen just short of 30% over the past four weeks which is one of the most rapid declines from a high of any year since at least 1990.  The largest and last time with a comparable drop was in 2010 when it fell almost 40%.  1995, 1999, and 2001 are the only other years that have seen even larger declines from an annual peak than this year. 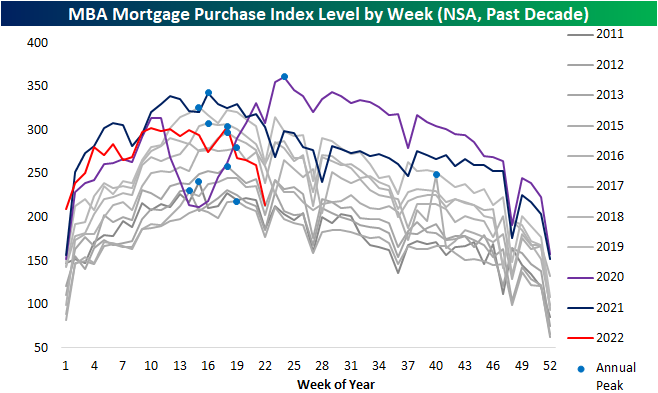 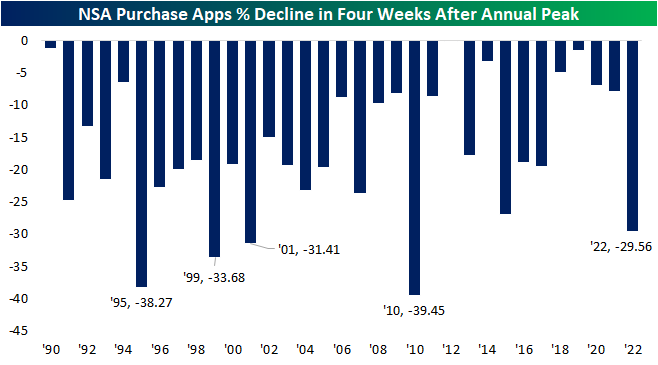 While the macro backdrop for housing continues to deteriorate, S&P 1500 stocks that are part of various housing-related industries have underperformed the broader market over the past year. Below we show the relative strength lines of a handful of these industries’ S&P 1500 indices versus the S&P 1500 since this time last year.  Some groups like Mortgage REITs, Household Appliances, and Home Furnishing have been steady underperformers over the past year while there were others that had managed to hold out. For example, Residential REITs and home improvement stores were actually outperforming handily up until only a few months ago. Of course, the past few months have seen a complete unwind of that outperformance as they have now posted inline returns to the broader market. Click here to learn more about Bespoke’s premium stock market research service. 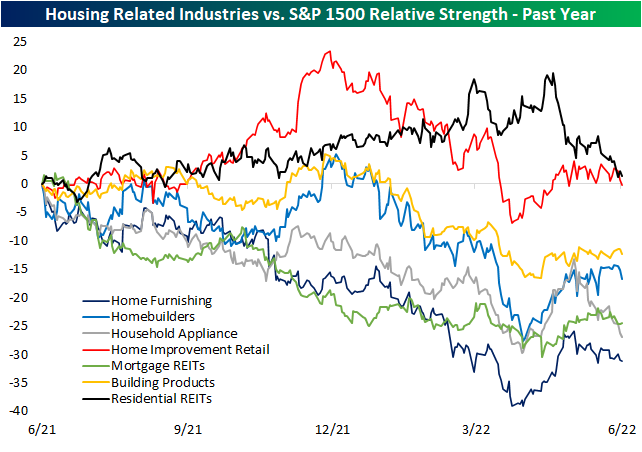