For most of the session yesterday, the S&P 500 was having trouble choosing a direction, but come the final hours of trading with a CPI release looming, the index took a decisive turn lower. Given rampant hot inflation over the past couple of years and its implications for changes to monetary policy, that sort of late day selling ahead of CPI prints has been the norm as shown below.  On average for the past two years, the day before CPI releases has typically seen the S&P 500 trade higher for most of the session before turning lower and erasing its gains in the afternoon; just as we saw yesterday. 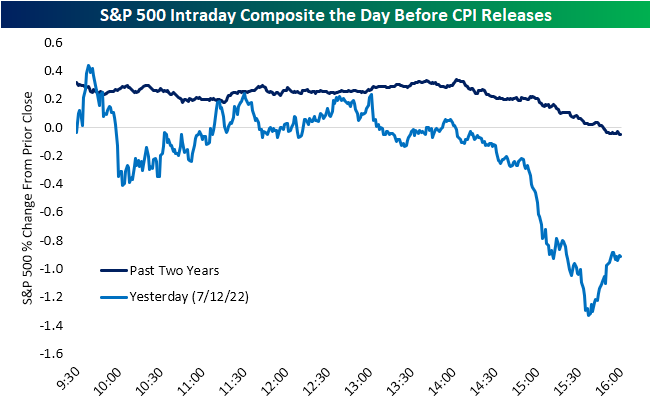 With another hotter than expected print this morning for both headline and core measures of inflation, yesterday’s late day sellers seem to have been on the right side of the trade as the S&P 500 has fallen further and is on pace for the sixth drop on a CPI print in a row. Taking a look at intraday price action of the S&P 500 on CPI release days, historically there has been a downward bias with all releases since 2000 averaging a drop of a few basis points by the close.  Over the past two years it has been far worse with an average decline of 28 bps.  Most of that drop has actually occurred after a bout of midday selling. 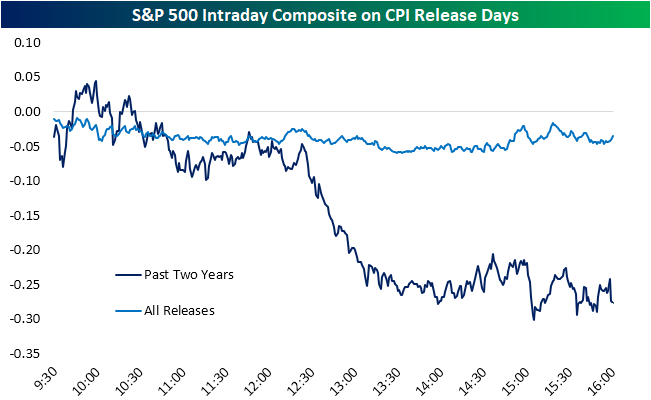 Using data from our Economic Indicator Database, filtering out for only times in which CPI has come in above expectations (on a month over month basis), that same pattern is apparent.  The S&P 500 tends to trade in the red for most of the morning but the worst declines occur in the early afternoon before some stabilizing into the close. 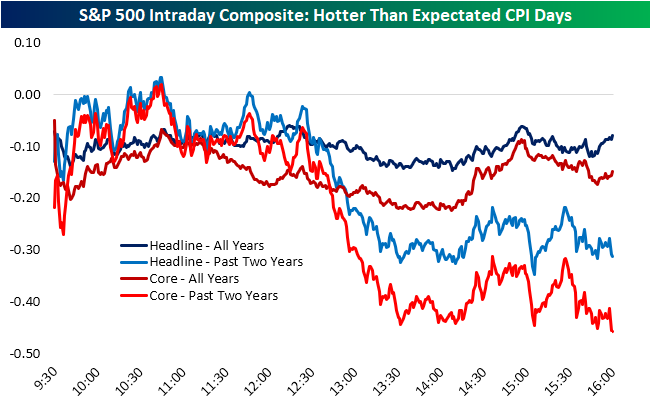 In response to today’s hotter than anticipated release, the S&P 500 gapped down 1.2% which ranks as the fourth worst gap down for the index on a CPI day since at least 2000.  Going back over the past two decades, there have only been a total of seven gaps down of 1% or more on a CPI day.  Including today, four of those releases have occurred this year: February (-1.2%), March (-1%), June (-1.64%), and today (-1.23%).  Taking a look at the intraday pattern of the S&P 500 across those 1% or larger gaps, the index has tended to continue to fall throughout the session with the lows of the day tending to occur around 2:30 EST with modest sideways action into the close from there.  Click here to learn more about Bespoke’s premium stock market research service. 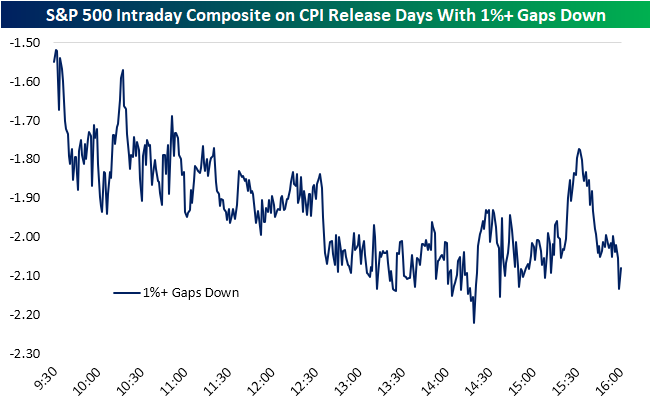