More and More Investors Are Looking For A Correction

The S&P 500 has been hovering around 0.5% below its record highs this week, but without a true test of those highs, sentiment has not moved very far. The American Association of Individual Investors‘ weekly reading on bullish sentiment fell from 37% last week down to 36.4%. While that is the second week in a row with an absolute move less than a full percentage point in size, the marginally lower reading does leave bullish sentiment at the lowest level since the end of October. 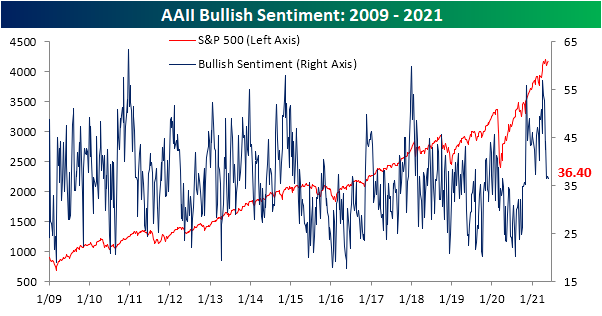 Bearish sentiment moved by even less, only rising 0.1 percentage points.  At 26.4%, it still is below the reading of 27% from the first week of the month. Outside of that reading, that is the highest level since February. 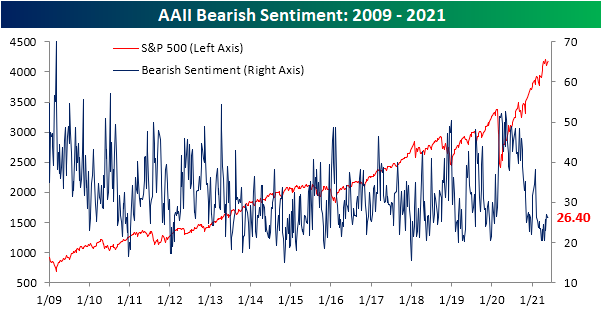 This week’s moves left the bull-bear spread little changed at 10.  That’s down 0.7 points from last week but still above the 9.5 reading from two weeks ago. 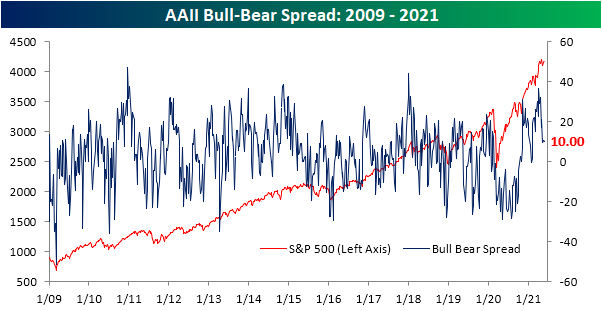 Once again, the highest percentage of investors are in the neutral camp at 37.1%.  As was the case last week, that makes for the highest level in neutral sentiment since the first week of 2020 when it stood north of 40%. 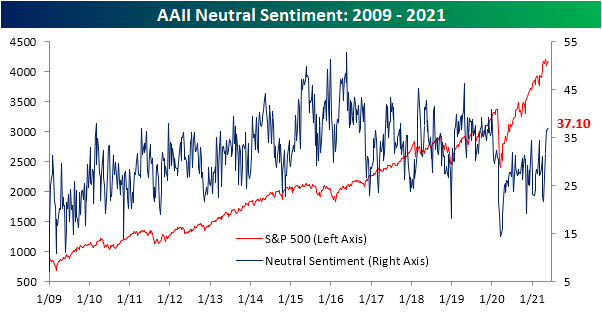 Pivoting over to sentiment for equity newsletter writers measured in the Investors Intelligence survey, there were some more interesting moves.  Bullish and bearish sentiments were not necessarily anything to gawk at similar to the AAII survey. Bullish sentiment has been on the decline with this week’s survey showing a 3 percentage point drop to 51.5%, the lowest level since March 10th. Meanwhile, bearish sentiment moderated from 17.2 to 16.8%. That was the same level as the start of the month.

The percentage of respondents “looking for a correction” was more notable. Rather than simply asking whether or not respondents foresee a correction in the technical sense on the horizon (a 10% decline from a high), Investors Intelligence defines a newsletter writer as “looking for a correction” when they are bullish on a list of stocks but at a lower price point. Coming in at 31.7%, the reading is a few percentage points above the historical average of 27.6% and is in the top quartile of the historical range.  In other words, it is an elevated reading albeit far from without precedence.  What is more significant is that it has been over a year since this part of the survey has seen these levels. 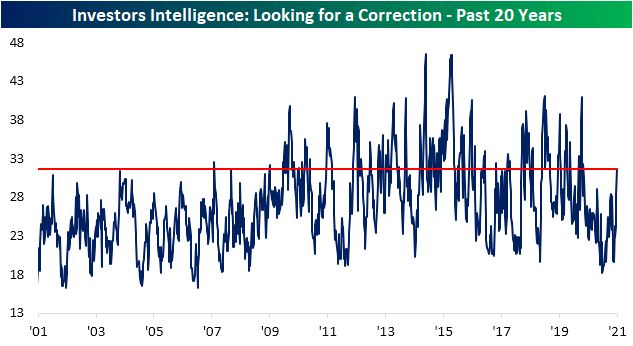 In the history of the survey dating back to 1963, there have only been eight other times that the percentage of newsletter writers looking for a correction has crossed above 30% for the first time in at least a year.  The most recent of these was in April 2009. In the table below we show the S&P 500’s performance in the year following those occurrences.  As shown, performance has been generally positive across those past instances with average gains over the following weeks and months and moves higher at least 75% of the time one month, three months, and one year out.  Additionally, while there were two times, 1982 and 2009, in which the S&P 500 rallied over the following year without looking back, there were another two times, 2001 and 2007, that at the following years’ lows, the S&P 500 would end up lower by double-digit percentage points.  Click here to view Bespoke’s premium membership options for our best research available.