Homebuilder stocks are under pressure again today following a weak earnings report from KB Home (KBH) which has the stock trading down over 3%.  The weakness in KBH has also shown up in the iShares Home Construction ETF (ITB) which is down 1.6% and on pace for its lowest close in more than a year. 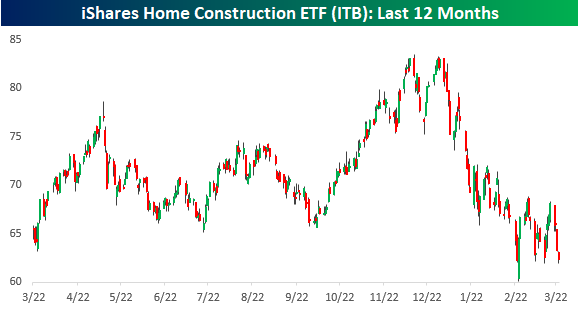 Rising rates have been cited as a major cause behind the weakness in homebuilder stocks, but they aren’t the only factor.  As mentioned in the KBH call this morning, constraints in the supply of both labor and materials has also slowed down business for homebuilders.  They literally can’t build houses fast enough to meet demand.  The chart below compares the performance of ITB versus Bankrate.com’s 30-year mortgage rate (shown on an inverted basis in the chart).  Over time, there has been a positive correlation between homebuilder stocks and rates, but there have also been periods where the two have diverged as well, and if you’re long homebuilder stocks, you should be happy that mortgage rates aren’t the only factor driving performance of homebuilder stocks.  If that were the case, the recent surge in rates (shown by a falling red line in the chart) would have resulted in a crash in homebuilder stocks. 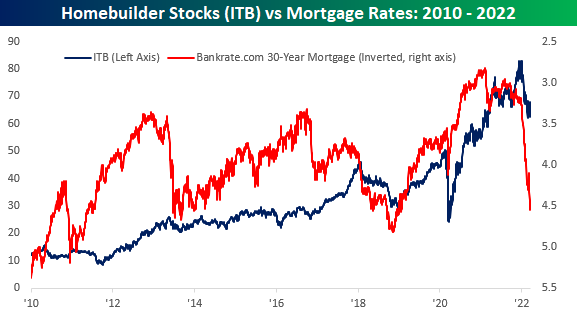 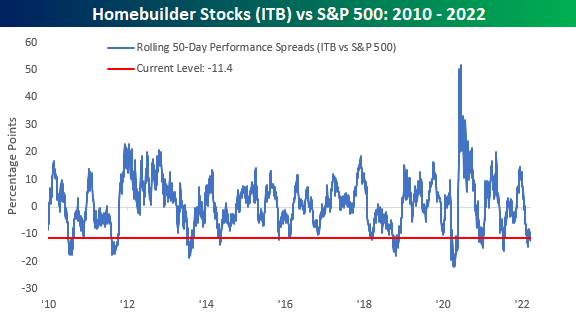