Earnings season unofficially came to a close a couple of weeks ago, and as such, the pace of earnings is slowing with the highest number of companies reporting for any day of the next month being March 12th with 47 reports due that day.  Looking back on Q4 earnings results, a massive number of companies reported triple plays. A triple play is when a company exceeds analyst forecasts on the top and bottom line while also raising guidance. Using data from our Earnings Explorer tool, 12.75% of all earnings reports were a triple play in the just-completed earnings season.  Although that is down from a rate of 14.6% the previous quarter, no other quarter in the history of our data has seen as strong of a number of triple plays. 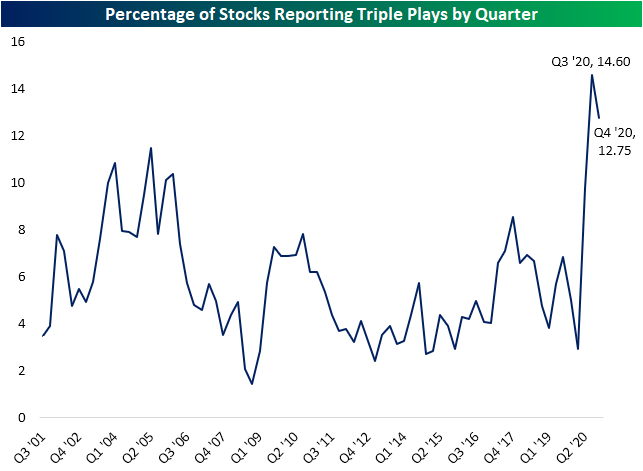 On a day that the broader market is also trading lower, even triple plays of the past 24 hours are not seeing the best reactions to earnings despite solid results.  Since the closing bell yesterday, there have been three triple plays from Hewlett Packard Enterprise (HPE), Veeva Systemes (VEEV), and Ambarella (AMBA). Of these, only AMBA is trading in the green today.

Enterprise software company HPE reported a third triple play in a row last night beating EPS estimates by 11 cents while sales came in at $6.83 billion versus estimates of $6.75 billion.  The company also guided higher.  While the stock was at a new 52-week high at the open, so far this morning HPE has shifted lower and is now down 1.24% for an outside day. Granted, headed into earnings the stock was and continues to be overbought at around 1.5 standard deviations above its 50-DMA after a substantial run over the past few months. From lows last October through today’s decline, the stock has risen 74%. 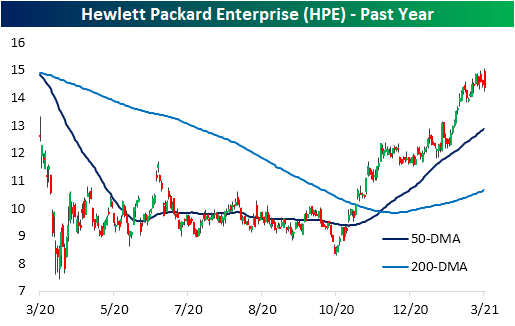 Veeva Systems (VEEV) is a cloud-based software solutions company specializing in the life sciences industry.  The company has consistently reported triple plays in the past with half of its 30 reports having been triple plays. It is the other triple play that is trading lower today currently down over 4% as of this writing.  In addition to raised guidance, the company reported revenues up 27.4% year over year which was around $16 million above forecasts.  The company also beat on the bottom line with EPS topping estimates by 15 cents.  Unlike the still extended HPE, VEEV has been fluctuating around its 50-DMA in recent days with the sell-off on earnings today bringing the stock to the low end of that range.  If the stock continues to head lower, interesting support levels to watch will be the 200-DMA and the lows from the fall. 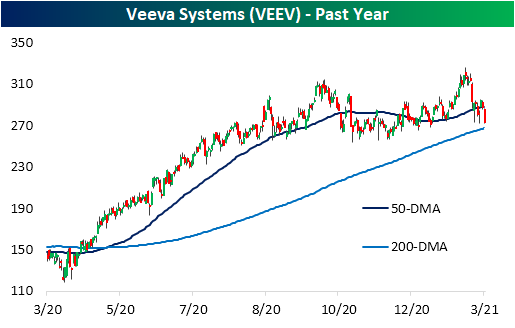 Not every triple play is trading lower though. Semiconductor design company Ambarella (AMBA) is up around 7.5% after reporting EPS of $0.14 versus $0.08 expected and revenues about $4.5 million above estimates.  Shortly after the open, the stock broke out to new highs surpassing the previous highs from mid-February.  Since then though, it has pulled back and is now back down around 5% below those highs.  Click here to view Bespoke’s premium membership options for our best research available. 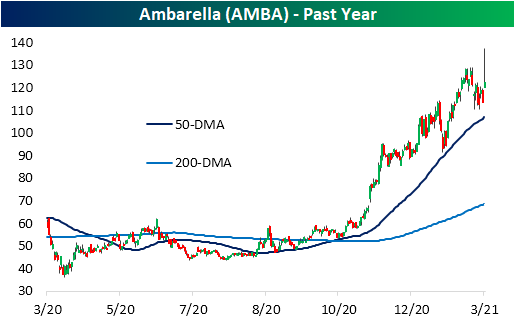