Below is analysis included in today’s Morning Lineup.  You can receive the Morning Lineup in your inbox each day with a Bespoke Premium or Bespoke Institutional membership.  Click here to start a two-week free trial.  Last night we got a couple of interesting data points about the state of the global economy. The first is near-real-time in the form of Korean trade data for the first 20 days of the month of July.  As shown in the chart below, YoY rates of change bounced huge in June after enormous declines in April and May.  Unfortunately, the bounce is not continuing, and preliminary trade data continues to run at a -13% YoY pace for the month. 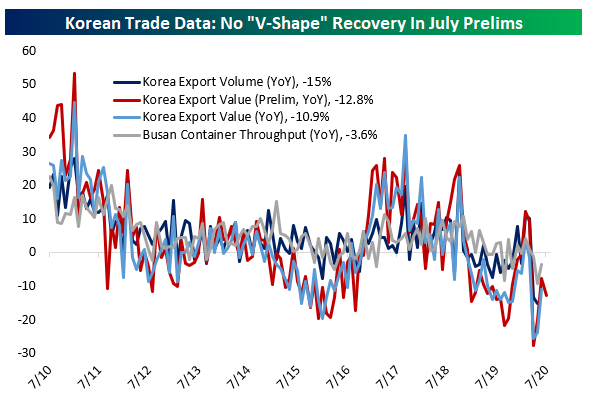 That’s consistent with slightly more lagged alternative indicators that tend to do a good job following the global economic cycle. Swiss watch exports data updated last night showed a very large decline of about one-third YoY; that’s a huge improvement on the two-thirds decline in May, but between that and still-weak performance of Macau’s casinos, it’s hard to find a data point suggesting a robust recovery in economic activity volumes and animal spirits across the global economy. 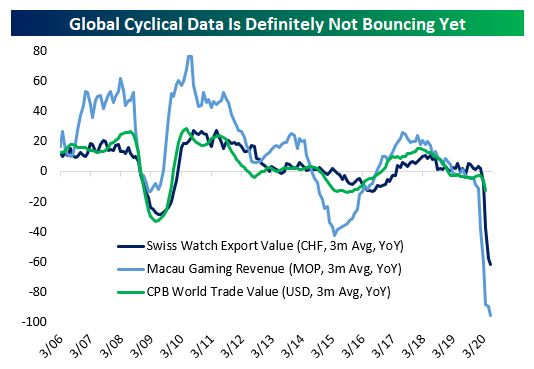 Where there’s room for hope is in capital expenditures as proxied by the machine tool orders data released each month by Japan’s trade association of manufacturers in that category.  This data is very timely, with the revised June numbers showing a little more detail than the headline release a couple of weeks ago.  As shown below, Chinese orders have surged while American customers are also stepping up to by at a much faster clip than the last couple of months.  While the EU bounce looks small, even that amounts to 10% sequential improvement. These series have a long way to go to get back to “normal” but they’re at least on that path for now.  We went into further detail on contribution to total earnings as well as YTD gains in last night’s Closer report, which is available to Bespoke Institutional members.  Click here to start a two-week free trial. 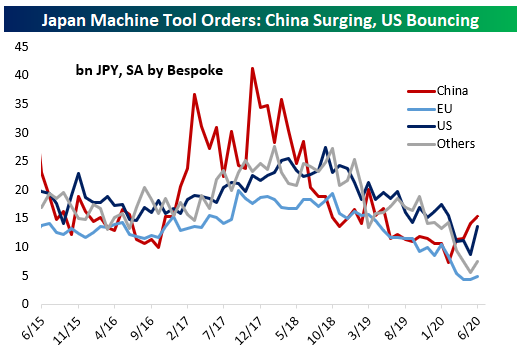