To round out the month of August, the major indices are slightly lower on the day.  Overall, in the final week of the month, small caps like the Micro-Cap ETF (IWC) and Russell 2000 (IWM) have generally outperformed although they are coming from below their 50-DMAs, and yesterday they saw a reversal lower. Large caps have posted smaller gains but are reaching new record highs. The price action of mid-caps, on the other hand, has been a mix of small and large caps.  Mid-caps, like the S&P MidCap 400 ETF (MDY) and Core S&P MidCap ETF (IJH), are broadly overbought and have also posted solid gains in the past several days of around 2%.  Additionally, whereas this week they are on the cusp of extreme overbought territory, last week those same ETFs were still within one standard deviation of their 50-DMAs.

While mid-caps have made a solid move higher over the past five days, like small-caps, they have pivoted lower in the past couple of sessions.  From a charting perspective, those moves lower also come right as IJH and MDY made a run at their highs from the final days of April.  Having rejected that resistance, there is the potential for nearby support around the highs from earlier this month and early June and then the 50-DMA below that. Click here to view Bespoke’s premium membership options. 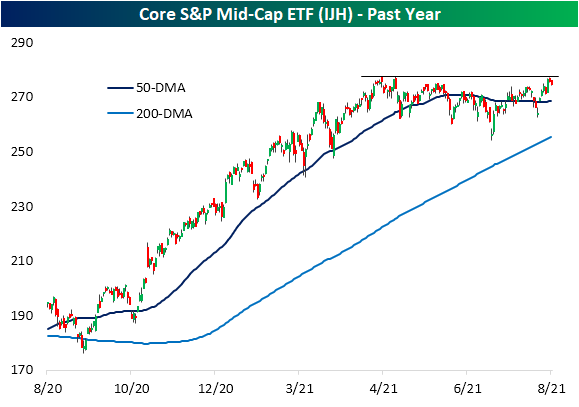 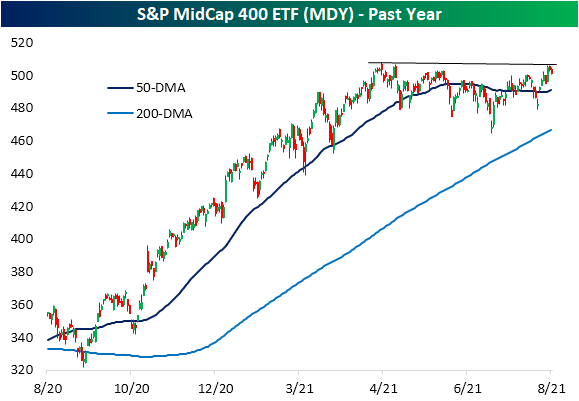