Memory Lane: The Best and Worst Days of This Week Through History

With a 500-point decline in the Dow last Friday and a 500-point gain today, volatility in the markets has picked up, but days like the last two pale in comparison to the most extreme up and down days of the upcoming week in market history.  For these two extremes, we have to go all the way back to 1950 and 1931.

The worst market day of the current week in the history of the S&P took place on 6/26/1950 when the S&P fell 5.4%.  Stocks jolted downward that day on the uncertainty surrounding the Communist invasion in Korea with North Korean tanks crossing over the 38th parallel and invading the South Korean capital of Seoul. President Truman condemned the ‘latest aggression in Korea in defiance of the Charter of the United Nations’ and pledged his full support of U.N. efforts to end the fighting.  The nature of the support and whether American troops would be sent to Korea if the U.N. requested them, however, was left unanswered.

The fact that the Soviets were considered responsible for this aggressiveness brought into focus the fact that like Korea, Germany was a split country with a lack of military force in place to prevent a Soviet-sponsored proxy invasion. The worrying implications of the invasion resulted in heavy price action reminiscent of the fall of France on 5/21/1940 (-9.14%) as volume surged to the highest levels since that day.

The S&P’s decline on June 26th, 1950 had been preceded by a year-long bull run marked by a resurgence of public participation in markets. At the market open, imbalances were so wide between bids and offers that it took certain issues upwards of an hour to open for trading, and once they opened for trading, selling was exacerbated by stop-loss orders. Liquidations continued to come through the market in waves, with trading periodically coming to a standstill only to be interrupted by larger volumes of even more aggressive selling, with the low of the day being the close.  How bad was the selling?  For the entire day, only 59 of the 1,256 (4.7%) issues traded were up on the day. Radio Corporation was the heaviest traded issue of the day on 124,000 shares, slipping 2 1/4 points to a price of 19 5/8, Chrysler lost 7 to 73, and General Motors fell 6 3/8 to 90 1/8.

Selling in June 1950 continued right up through mid-July and the S&P dropped about 14% from its peak to trough.  As bad as the day was, the market would erase this loss by 9/15, less than two months later, and it kept rallying from there.  Click here to view Bespoke’s premium membership options. 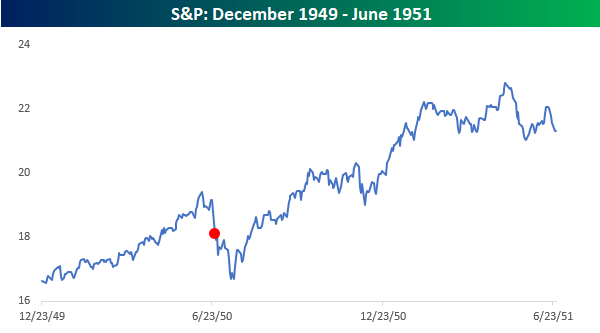 The best market day of the current week in the history of the S&P took place on 6/22/1931 when the S&P rallied 10.5%. Over the weekend of 6/21/1931, President Hoover unveiled a proposal to put a one-year moratorium on upwards of a quarter billion dollars of World War I reparations and war debts owed to the United States.  Hoover noted that “The purpose of this action is to give the forthcoming year to the economic recovery of the world and to help free the recuperative forces already in motion in the United States from retarding influences from abroad.”  Wall Street initially loved Hoover’s plan to help alleviate the Great Depression in Europe, and investors, previously starved for good news, cheered the plan.  Those Wall Street firms with international connections reported a surge in foreign demand for equities, and professional traders sought out the most shorted stocks and caught the shorts flat-footed squeezing them out of their positions.  The brighter economic outlook also provided a lift to commodity prices.

Unfortunately, the bullish party ended early, and just as the losses from 6/26/1950 were erased within two months, the gains from 6/22/31 were gone by early September.  Hoover’s moratorium, which didn’t have anywhere close to universal support in the US and Europe, didn’t pass in Congress until that December.  In that ensuing period, though, Germany would have not just a currency crisis but a banking collapse as well, and then soon after Great Britain abandoned the gold standard.  As optimistic as Wall Street was on 6/22/1931, all of the gains were erased by 9/8 of that year, and the market continued its slide right up through mid-1932 when it made the final Great Depression lows – 70% below where it closed on 6/22/31!  Click here to view Bespoke’s premium membership options. 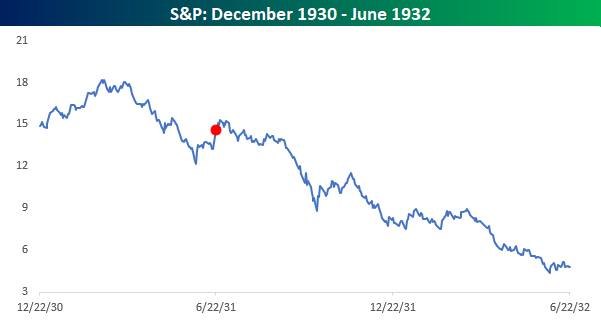