Memory Lane: The Best and Worst Days of This Week Through History

The week before July 4th is often a quiet one for stocks as traders look to make it a vacation and tack on some days before or after the holiday.  That doesn’t mean it’s always quiet, though.  Throughout the S&P 500’s history,  there have been a number of big up and down days during the current week of the year.  Below we highlight one of the worst and best; one from 1933 and the other more recently back in 2009.

Starting off with one of the worst days back on July 2nd, 2009, with the market closed on Friday, July 3 rd in observance of the July 4th holiday, the release of the June Employment report was moved up to Thursday, but after the number was released, investors probably wished the report had been canceled altogether.  Economists expected total job losses of 365K in June, but the actual decline came in significantly higher at 467K compared to May’s loss of 322K, thus breaking a 4-month streak of lower job losses. The employment report had a raft of other record figures included within it as the unemployment rate climbed up to 9.5% – a level not seen since 1983.  The average length of unemployment increased to 24.5 weeks- the highest level since the government began tracking that statistic 1948- and the average workweek for rank-and-file employees in the private sector (80% of the workforce) slipped to 33 hours- the lowest level since the government began tracking that number in 1964.

June’s losses brought the total number of jobs lost since the beginning of the recession to 6.5 million, erasing the total number of jobs gained in the previous nine-year expansion.  The only other time that happened was back during the Great Depression. The weak employment numbers raised fears that the deepest and longest recession since the 1930s still had some time to go before a recovery would be underway, and investors looked at the data and questioned whether they had been too optimistic in bigging up stocks from the March 9th lows.

The S&P 500 opened lower and continued to sell off into the close as investors took profits ahead of the upcoming earnings season.  Economically sensitive areas of the market got hit the hardest with the Dow Transports dropping 3.7%.  After rallying 40% from its March low to its June high, the S&P 500 was down about 2.5% heading into the report, so the 7/2 decline brought the total decline to over 5%.  While a 3% decline is always painful, relative to the level of market volatility during that period, it wasn’t particularly extreme, and by July 13th, the S&P 500 was already back above its pre 7/2 highs, and it continued higher throughout the rest of the summer. Click here to view Bespoke’s premium membership options. 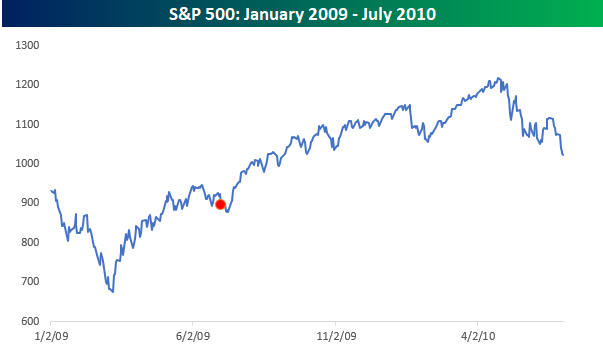 Chart watchers were greeted with a puzzling move on Monday, July 3rd, when the market opened with large blocks of rails and industrial issues trading substantially higher than Saturday’s close (yes, there was a time when the stock market was open on Saturdays).  Fundamental investors focusing on macroeconomic factors had a range of positive economic news to choose from, including reports of sharp increases in railway car loadings, copper inventories for 1933 being depleted at double the rate as 1932, as well as the moderate rise in prices not having affected the reports of Chain Stores. Volume was frantic at the open as the tape ran as much as ten minutes behind the floor’s transactions in the first hour.

A statement from President Roosevelt on the federal government’s position regarding the international currency measure proposals from the World Economic Conference in London released by Secretary of State Hull was interpreted as both nationalist and inflationist. “The sound internal economic system of a nation is a greater factor in its well-being than the price of its currency in changing terms of the currencies of other nations.” President Roosevelt continued by calling upon the World Economic Conference to direct its efforts to remove trade barriers and stressed the importance of a sound internal economic system in order to reach ultimate stability.

Roosevelt’s statement was met by both praise from supply-side economists like John Maynard Keynes and Irving Fisher and dismay from the gold-standard countries. The reaction of stock prices was far-reaching, with pivotal issues that had been sluggish, breaking out of their range to the upside.  Numerous rails and specialties rallied on large volumes while more defensive-oriented Utility stocks experienced more modest gains. Volume on the NYSE at the close was placed at 6,720,000 shares with 266 stocks hitting new highs for the year and zero new lows.

Many observers argued that inflation was behind the move in share prices as the President subordinated all efforts to his campaign for higher domestic price levels (including taking the dollar off the gold standard in April and introducing an amendment to the Agriculture Adjustment Act which drastically expanded the government’s power over monetary policy in May). However, indications that the inflation movement was not the sole inspiration for the advance could be seen in the action of the bond market where prices rose sharply and yields declined.  The rally from 7/3/33 didn’t last long, though, as the day’s gains were erased by 7/19/1933, and the S&P 500 didn’t trade meaningfully above those levels at any point in the next year.  While the S&P 500 stalled out around its July 1933 levels, keep in mind that in the months leading up to that date, the S&P essentially doubled. Click here to view Bespoke’s premium membership options. 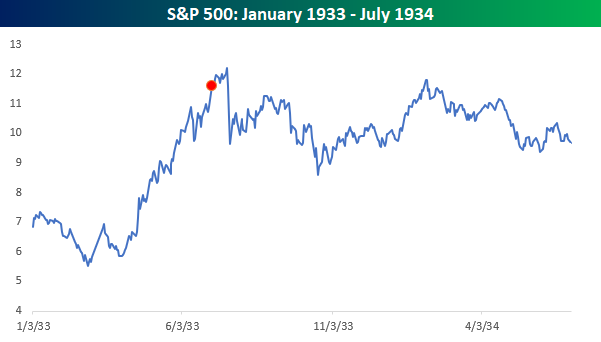