Memory Lane: Some of The Best and Worst Days of This Week Through History

“It was greed, pure and simple.” – Dennis Kozlowski, Tyco CEO

With Americans still on edge following the September 11th attacks, the S&P 500 surged on the first trading day after the peaceful and uneventful July 4th holiday.  Even a weaker-than-expected jobs report couldn’t dampen the sense of relief.  The peaceful weekend coupled with two solid days of gains in European bourses and panic short-covering on a light volume holiday-shortened Summer Friday helped to exaggerate the upside.  Relative to prior weeks, it was a rare positive day for the S&P 500.  Breadth was positive as gainers outnumbered losers by a margin of more than 4 to 1, and semis surged more than 9%!  With terrorism fears momentarily allayed, bulls pushed the S&P 500 to its largest one-day gain since May 8th.  Would the post-July 4th rally serve as the catalyst to break the downtrend in US stocks?

Stock market declines in the first half of 2002 were driven by economic weakness as a result of 9/11 and numerous accounting scandals that surfaced in companies like Enron, Tyco, and WorldCom.  July 5th provided some irony on that front, though, as The Great Atlantic and Pacific Tea Company (aka A&P grocery chain) disclosed its own accounting error.  Only this one was in its favor as an audit showed that the grocer had improperly booked manufacturer discounts and promotions, and the restatement turned what was originally a loss to a gain.

The rally on July 5th also came just two trading days after the S&P 500 first closed below its 9/11 lows, and the bounce instilled some hope that perhaps this would mark the beginning of the elusive bottoming process.  Unfortunately, there was no such luck.  The following Monday, the S&P 500 dropped 1.22%, and that was followed the next Tuesday by a decline of 2.47%, erasing all of the prior Friday’s gain.  The sellers still weren’t done yet, though. Over the next two weeks, the S&P 500 dropped an additional 16%+.

After a strong rally on a holiday-shortened Friday (discussed above), stocks opened the following week with declines that reached a crescendo on Wednesday, July 10th when the S&P 500 fell 3.40% to levels not seen in nearly five years (November 1997).  As mentioned above, accounting scandals, fears of terrorism, and the weak economy all merged to create one of the worst bear markets in decades, with stocks having their worst half-year performance since 1970.

The first two trading days of this week in July 2002 completely erased the big gains from the prior Friday, and then on Wednesday (7/10/02) equities immediately opened down and ground lower throughout the entire day, closing near the lows of the day.  While the news items of the day certainly did not generate any positive sentiment (Qwest under federal investigation, President Bush delivering a speech on corporate responsibility that did not have any concrete steps to prevent future scandals), the market action seemed driven more by despondency than any specific catalyst.  A report that investors pulled $11.8 billion out of stock mutual funds in June, the largest move since the prior September after the 9/11 attacks, provided concrete evidence of that sentiment.  With so much pessimism and large outflows from mutual funds, a contrarian bet might be to take the other side, but it would be a few more weeks before stocks were able to show any signs of stabilization.  Over the nine trading days to the eventual bottom of the July swoon, the S&P 500 fell seven times for an additional decline of 13.3%.  Click here to view Bespoke’s premium membership options. 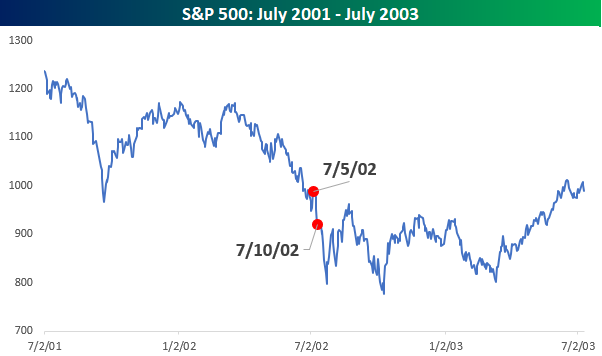