The S&P 500 is poised to open down about 1% this morning, but in order for today’s weakness to get anywhere near record territory for this day of the year (6/18/1930), it would need to drop a lot more from the open to close.

While most extreme market days have a clear catalyst behind them, others don’t. June 18th, 1930 (-3.50%) was the worst June 18th in the S&P’s history but a decline that came with little in the way of a concrete catalyst. With the market still in a tenuous position following the Black Tuesday crash, June 18th was a day of heavy volume where blue-chip stocks suffered some of the largest losses Selling reached a climax in the morning with shares of well known “glamour stocks” like Gillette, Mack Trucks, and Sears Roebuck trading below the levels they traded at on Black Tuesday.

After a lull in the volume in the mid-day, equities rebounded in the afternoon, but the damage was still done as a blue-chip stock like Eastman Kodakdropped 8.2%. Although the Dow and S&P did not make new lows relative to the lows in 1929, several key stocks exhibited negative divergences and took out their Black Tuesday lows. With a lack of a precise source for the erratic price action, it was thought that a combination of a negative “loadings of railway freight” report and seasonally low steel production contributed to a belief that hopes for recovery were premature, and rational investors, therefore raised cash. The downward slide in stocks would continue until 1932, where the market would reach its lowest level of the 20th century and lose an additional 70% of its value. 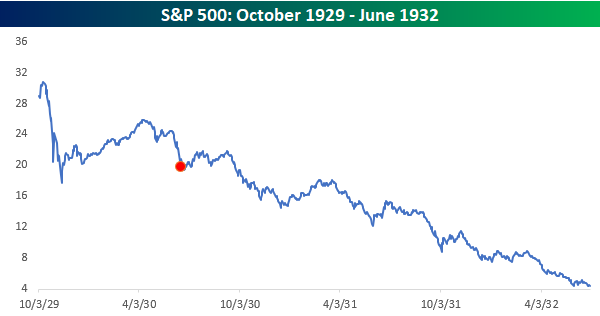 54 years later on June 18th, 1984, the S&P 500 jumped 1.81% with the rally ascribed to bargain hunters and short covering.  In the grand scheme of things, most one-day rallies of 1.8% don’t burn themselves into your permanent memory bank, but June is not known for being a particularly volatile month.  Heading into this day in 1984, market participants were still licking their wounds from the previous week’s rate-induced beatdown that was part of a broader sell-off that has been in place since late 1983. Some weaker economic data, though, raised hopes that the Fed would actually loosen policy, and that’s all it took for big buyers, including Salomon and other institutions, to step in and do some bargain hunting.  The uptick in institutional activity showed itself as the number of large block trades (10,000+ shares) increased from 1,558 the prior day to 1,668.

In the weeks that followed June 18, 1984, the S&P 500 continued to drift lower, but by late July, the lows were in.  From there, the S&P 500 never looked back and hasn’t traded at those levels again since. Click here to view Bespoke’s premium membership options. 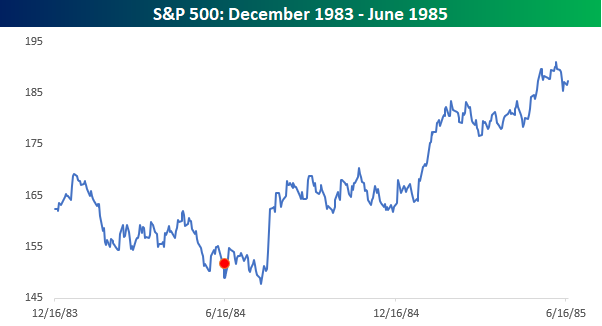