Meme Stocks Back in Focus

In the past week, the meme stocks like GameStop (GME) and AMC Entertainment (AMC) have come back in focus with each name making explosive moves to the upside which resulted in them being some of the top-performing stocks in the Russell 3,000 last week.  In the case of GME, the stock was up over 50% on the week at the intraday highs on Friday.  In spite of those big gains, GME was still left a few percentage points below the March closing highs and even further below the peak short squeeze highs from late January.  Meanwhile, AMC saw an even more sensational move that left its prior highs in the dust.  At its highs on Friday, AMC was sitting on an over 200% gain on the week which was just over 80% above the January 27th high.  Similar to GME, the highs on Friday did not hold through the end of the day as the stock ultimately closed down 1.5% versus Thursday’s close.  Starting off the shortened week, both GME and AMC are resuming huge moves higher with the stocks up 11.58% and 24.66%, respectively, as of this writing. Granted, even with those massive moves, both stocks are seeing an inside day.

Looking beyond two of the poster children of the short squeeze saga, performance last week was marked by a return to themes that were present in the period in January.  As shown in the top-right chart below, the same stocks that were up the most year to date through January 27th (the day of the original highs of both GME and AMC) were again the top performers last week. That decile of Russell 3,000 stocks on average were up 4.67% last week. Another identical theme of performance to January observed last week was with regards to heavily shorted names.  The deciles of the most highly shorted stocks—to which AMC and GME both still belong—were also some of the top performers last week.  The decile of the most heavily shorted names rose 3.73% on average.  Meanwhile, the least heavily shorted stocks on average only gained 0.3%.Click here to view Bespoke’s premium membership options. 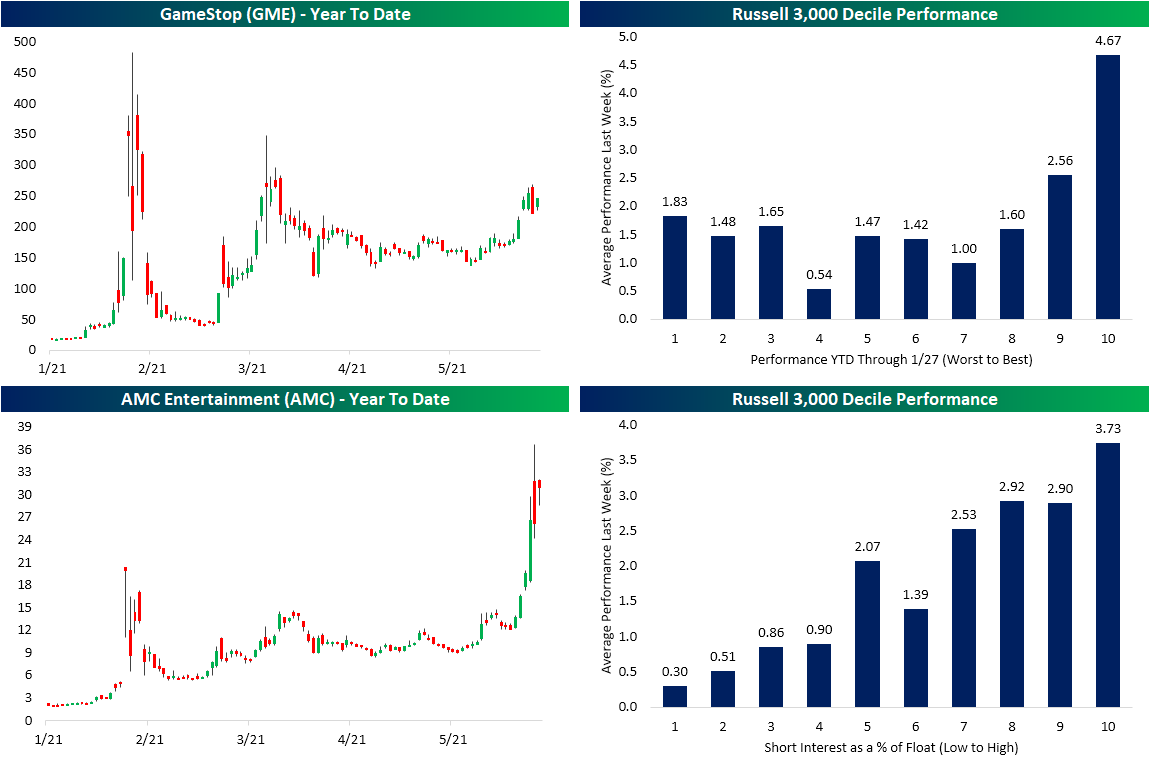