Megas Not Pulling Their Weight

We’ve become conditioned over the last couple of years to look to the mega-cap stocks of Apple (AAPL), Microsoft (MSFT), Amazon.com (AMZN), Alphabet (GOOGL), and Facebook (FB) to not only top the list of largest stocks, but also the best performers.  The month of November has been a different story, though.  Through Friday, the S&P 500 was up an impressive 11.3% on the month, but the equal-weight index (which weights each stock the same) was up a much more impressive 15.4%. Going back to 1990, this November’s performance of the S&P 500 Equal-Weight Index ranks as the second-best of the last thirty years only trailing the 18.6% gain in April 2009.

In addition to being one of the best months for the S&P 500 Equal Weight Index in terms of absolute performance, this month is also on pace to be one of the best months for the index relative to the market-cap weighted index as well.  At the current level of 4.13 percentage points (chart below), this November will be the best performance for the Equal Weight Index relative to the Market Cap Weighted index since April 2009.  Besides April 2009, which was just after the lows of the Financial Crisis, the only other months where the performance gap was wider were in five months spanning April 1999 through May 2003.

In terms of top-performing S&P 500 stocks this month, there have been a lot of winners.  In the entire index, only 40 stocks are down month to date, and only nine of those are down more than 5%.  The table below lists the 27 stocks in the S&P 500 that have rallied more than 40% so far this month.  The top six stocks listed, as well as a number of others, come from the Energy sectors.  Besides beaten-down stocks from the Energy sector, most of the stocks listed come from other sectors, like cruises, air travel, and lodging that have been battered by the pandemic. Five stocks you won’t find on the list, though, are the FAAMG stocks mentioned above.  While all five stocks are in the black for the month, none of them are even up 10%.  Slackers.

One last observation is that even after gaining at least 40% in November, 25 of the 27 stocks listed below are all still down YTD, and most of them by a lot.  The only two stocks that are now positive YTD are Albermarle (ALB) and DISH Network (DISH).  Even after taking into account this month’s gains, the average YTD change of the 27 stocks listed is a decline of 32.1%.  Click here to view Bespoke’s premium membership options for our best research available. 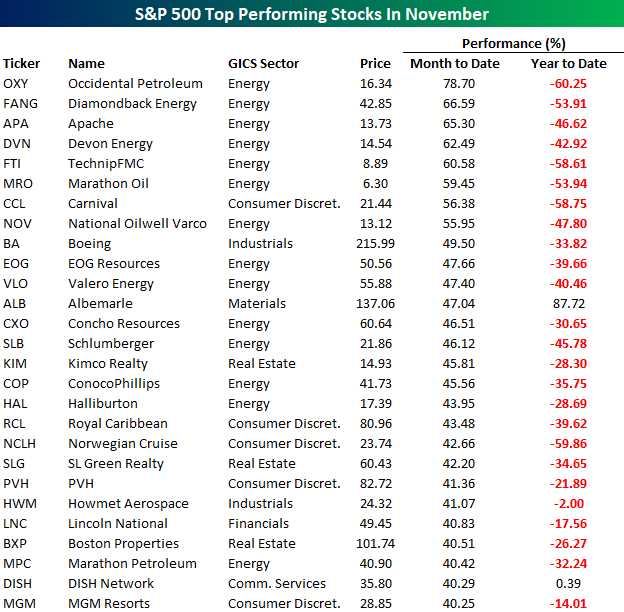