Bespoke members have the ability to build “custom portfolios” that allows them to easily track the stocks and ETFs they care about most.  One simple custom portfolio that we’ve created tracks the eight mega-cap Tech stocks.  Below is a snapshot of these eight stocks as they appear in our “Custom Portfolios” tool.  If you wanted to track your own stocks and ETFs in a similar fashion, simply start a Bespoke Premium trial and click on the “Custom Portfolios” page once you’re logged in.

As shown below, all eight of the “mega-caps” are up over the last five trading days, but NVIDIA (NVDA) is the clear standout with a massive gain of 16.66%.  The recent move higher for NVDA leaves it up 70% on the year and 12.4% above its 50-day moving average!  It also puts the stock in extreme overbought territory, which means it’s more than two standard deviations above its 50-DMA.

While Amazon (AMZN) is up 3% over the last week, it’s still 4.8% below its 50-DMA and in oversold territory.  Apple (AAPL) is the only mega-cap that’s not overbought or oversold but rather neutral, meaning it’s trading within one standard deviation above or below its 50-DMA.  Facebook (FB), Alphabet (GOOG), Microsoft (MSFT), Netflix (NFLX), and Tesla (TSLA) are all overbought, but unlike NVDA, they’re not in extreme territory.

Bespoke members can also easily see price charts of all the stocks or ETFs in the custom portfolios that they create.  This is a helpful way to monitor technicals across baskets in an efficient manner.  Instead of having to look through price charts one by one, you can quickly see them all on the same page.  Looking at the price charts of the eight mega-caps, you can see that Apple (AAPL), Facebook (FB), Alphabet (GOOG), Microsoft (MSFT), and NVIDIA (NVDA) are all in long-term uptrend channels, while things have been much more choppy for Amazon (AMZN), Netflix (NFLX), and Tesla (TSLA).  Click here to start a Bespoke Premium trial and start building your own custom portfolios. 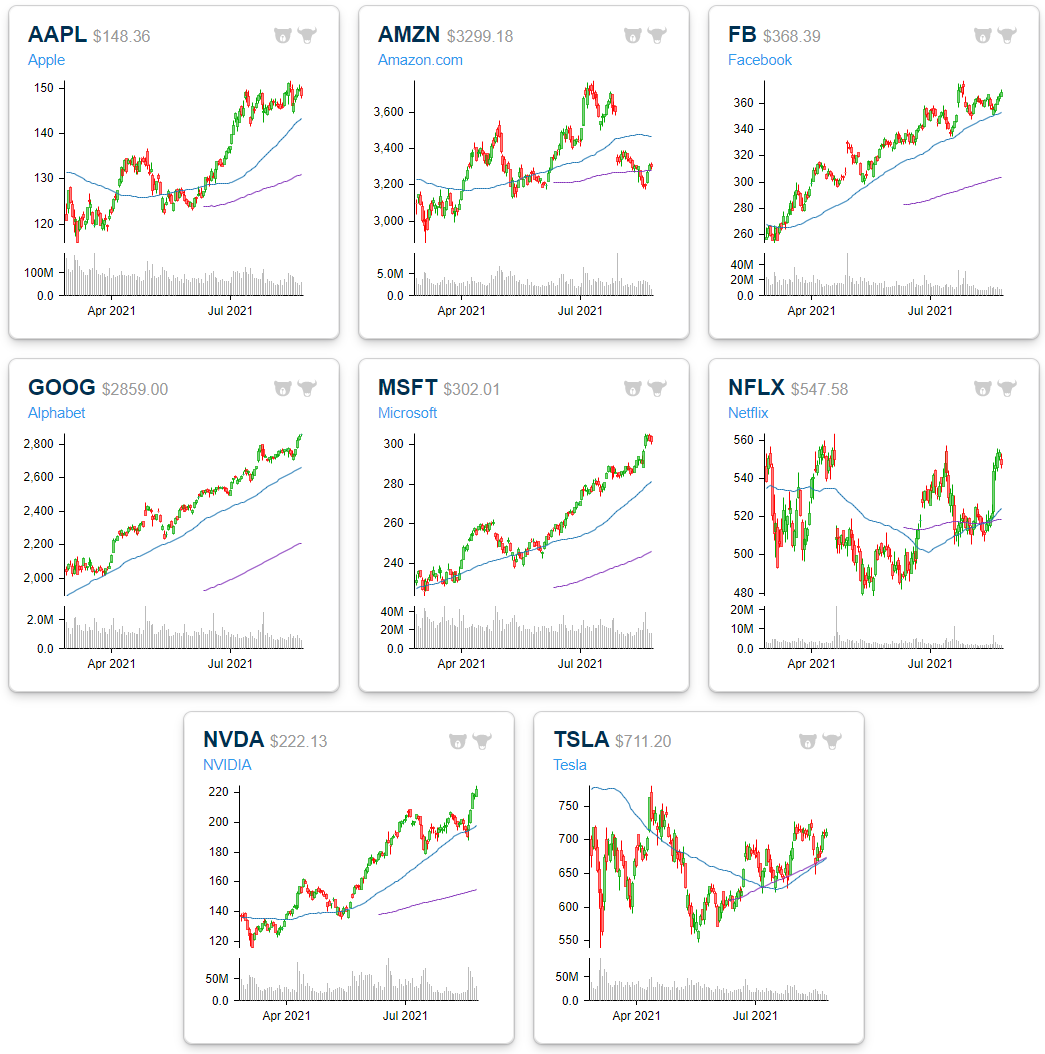