This year’s underperformance of the mega-cap stocks can be seen in the table and charts below.  First, in the snapshot from our Trend Analyzer of the five largest companies in the S&P 500 we can see that three of the five are underperforming the S&P 500 YTD and only Alphabet (GOOG) is significantly outperforming.

As shown in the snapshot of our Chart Scanner below, last week, Apple (AAPL) traded and closed below its 50-day moving average for the first time since November and broke its uptrend that had been in place over that time in the process.  Amazon.com (AMZN), meanwhile, hasn’t made a new high since 9/2 as it consolidates the massive rally off the March lows. Following the consolidation of the last five months, the stock is starting to look more attractive from a technical perspective.  Like AMZN, Facebook (FB) hasn’t made a new high since last September either, but unlike AMZN which has been forming a solid base, FB’s pattern looks more like a downtrend.  Alphabet (GOOG) and Microsoft (MSFT) are the only two of the mega-caps that have outperformed YTD, but at this point, they’re extremely extended. 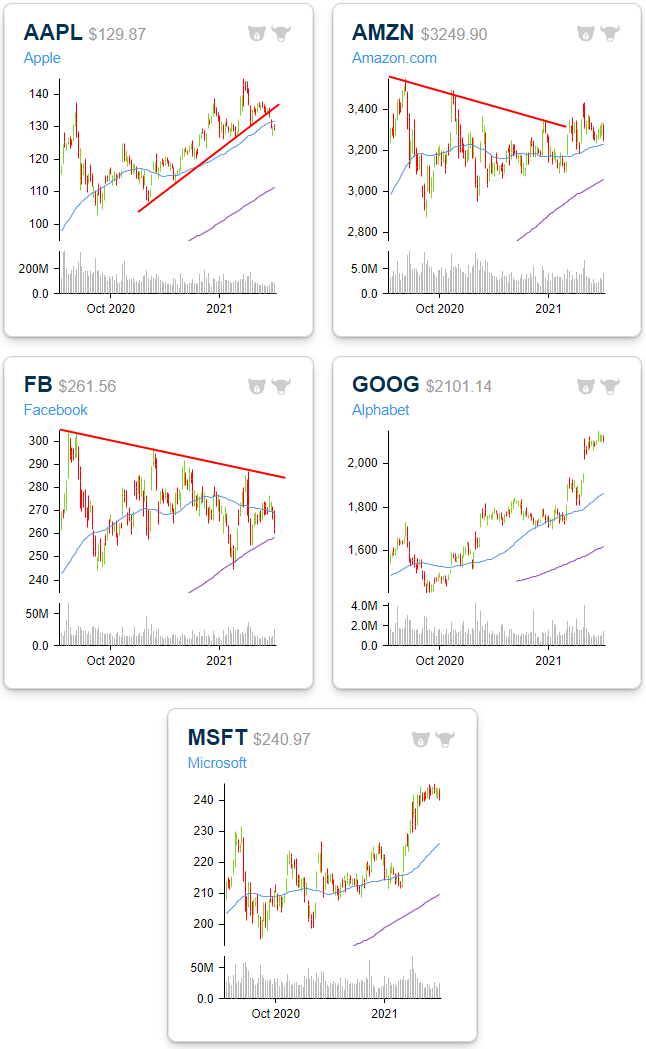 With Facebook performing so poorly—some of the reasons for which we discussed in Friday’s Bespoke Report—one would think that social media stocks have been out of favor. The reality, though, is that nothing could be further from the truth.  The chart below shows the performance of the four major social media stocks over the last six months with each stock indexed to 100.  While FB is unchanged during that span, Twitter (TWTR) is up 91%, Pinterest (PINS) is up 150%, and Snap (SNAP) has nearly tripled!  Click here to view Bespoke’s premium membership options for our best research available. 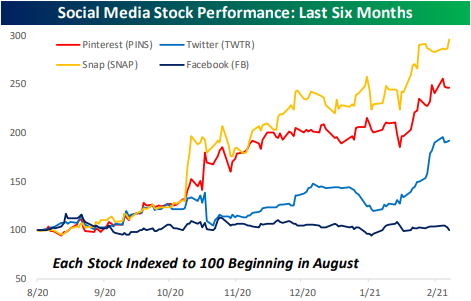