Mega cap stocks are an important area to watch and have been an area of our focus recently as the relatively small number of names hold a large weight within the S&P 500.  Their recent strength has propelled the broad market to a series of new highs in spite of what has been weaker breadth outside of this space.

In the chart below, we take a closer look at the relative performance of the four largest stocks versus the S&P 500 over the past year.  Alphabet (GOOGL) has performed the best versus the S&P 500 of the four names shown and is at one-year highs.  Apple (AAPL) outperformed the S&P significantly in 2020 but gave it all back from late January through May.  Since June, however, Apple has been on a tear versus the market.  Microsoft (MSFT) and Amazon (AMZN) are both still underperforming the S&P over the last twelve months, but they have made solid moves higher since June.  Click here to view all of Bespoke’s premium membership options and to sign up for a trial. 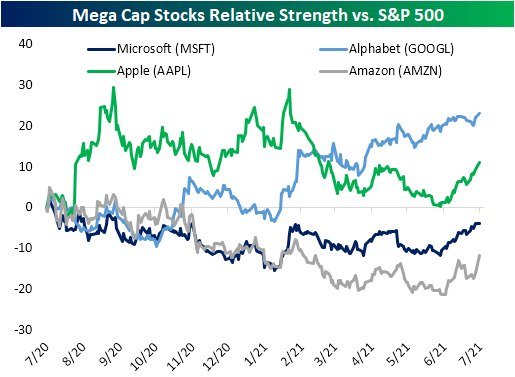